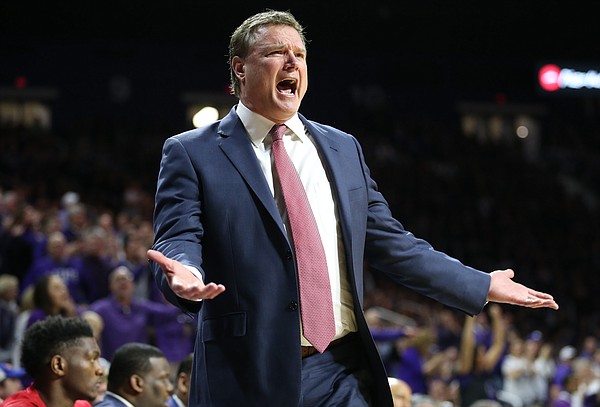 Kansas head coach Bill Self looks for a call from an official during the second half, Monday, Jan. 29, 2018 at Bramlage Coliseum in Manhattan, Kan. by Nick Krug

The 1-3-1 breakdown from KU’s 70-56 win over K-State features a strategy employed by the Jayhawks, one not executed by the Wildcats and the defensive highlight of Svi Mykhailiuk's career. If you have any plays or sequences you’d like to see GIFed please tweet @ChasenScott or comment below.

Play of the game: A simple switch —

Bill Self said it helped give his players a rest and keep them out of foul trouble. Devonte’ Graham called it the strategy that won Kansas the game.

So how much time did K-State coach Bruce Weber spend preparing for KU's 2-3 zone?

“None,” Weber said following a loss to the Jayhawks in Bramlage Coliseum.

Weber, now in his sixth year with the Wildcats, was flustered by the switch Self made late in the first half and again in the second.

KU hadn’t played much zone on the season — something Weber pointed out after the game — but he still felt his team should have done better against it.

“The last time Baylor zoned us, I don’t know, we carved it apart,” Weber said. “Moved the basketball, was one of the best zone clinics I’ve ever been a part of.”

K-State had a number of poor possessions against KU's zone, but that one showcased several of the issues.

There was some movement, but it almost felt like the Kansas State offense was operating in slow-motion. On the first ball-reversal, Levi Stockard — No. 34 — was slow getting to the short corner. Then when the ball came back to Dean Wade’s side, Stockard was slow getting to his spot once again.

The Wildcats did run other sets and found some success using a screener against the zone in the second half, but on that possession there was little-to-no execution of the things Weber said he wanted to see.

“Get it inside, move the basketball, misdirect, read the things,” Weber said. “Dean said, ‘(K-State had) no rhythm. I think that’s a great way to phrase (it). And I don’t know why.”

A trend: Gone but not forgotten —

For the second straight game, a KU opponent tried unsuccessfully to intentionally put KU center Udoka Azubuike on the line.

K-State waited to employ the infamous "Hack-a-Dok" strategy until the second half, but with the Wildcats one foul away from a one-and-one and KU flirting with putting the game out of reach, things were lining up for it to come into play.

“We talked about it at the timeout,” Weber said. “(The referees) warned us ahead of time that it had to be within the normal sequence of the game. I think Dean actually might of tried a couple times and just it didn’t happen.”

The possession started simply enough. Azubuike stood outside the paint and didn’t even move until he positioned himself for a potential offensive rebound off a Lagerald Vick drive.

The ball was blocked out of bounds with 15 seconds on the shot clock. K-State had another chance to foul.

This time, KU pretty much played right into K-State’s hands. Not only did Wade tug on Azubuike’s arm as he attempted to cut to receive the pass, Graham actually inbounded the ball right to the 7-foot, 280-pound big man.

Wade followed him out near the perimeter, guarding him closely and trying to knock the ball away, but there wasn’t anything deserving of a foul, so the play continued.

“(Wade) only had one foul,” Weber said of why he wanted to implement the strategy. “But he had to do it on some kind of play, like Oklahoma did.”

The third time around, KU made K-State pay.

Watch the bottom-left corner of the GIF. You can actually see Weber shaking his head at Wade, and then there’s a closeup of the coach with his arms out, as if he’s saying not to foul.

“It was the shot clock. It went down to eight and they had the ball out of bounds,” Weber said,” At that point I said, ‘Don’t foul. Let’s get a stop.’”

And even if K-State had wanted to come back and foul the next time, Azubuike wasn't involved in the ensuing play. At the next stoppage, Self took him out of the game entirely, finishing things out with Mitch Lightfoot on the floor.

One that stood out: Left hand, anyone? —

Svi Mykhailiuk has had a handful of blocks at the rim over his four-year KU career, but none were anywhere close to the quality of the chase-down swat he pulled off on Xavier Sneed on Monday.

Really, he owes the K-State guard a thank-you note.

Mykhailiuk’s block was impressive, but it probably shouldn’t have happened.

As Sneed broke down the court, he looked over his right shoulder twice — just like a wide receiver trying to gauge if anyone in the secondary might be able to catch him from behind.

Sneed undoubtedly saw Mykhailiuk, yet he took one more dribble and then tried to finish on the side of the rim Mykhailiuk was on.

If Sneed had adjusted and gone to the other side of the rim, not only would Mykhailiuk have not been able to reach the ball, he would’ve had to crash into Sneed and foul him to get the block.

Instead, Sneed didn’t opt to use his left hand. Well, someone did.

Love this blog Scott. Great point about the Svi block -- Sneed going right instead of left, making it easier for Svi.