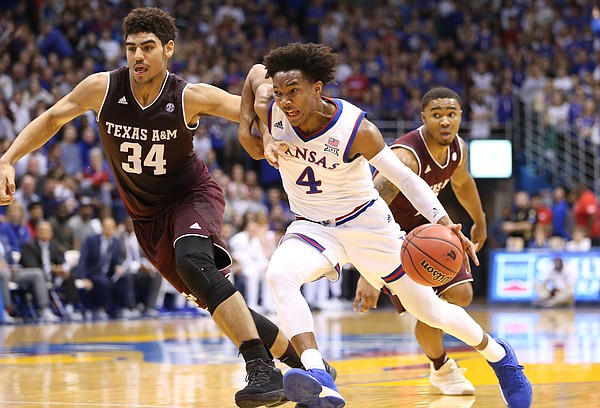 Kansas guard Devonte' Graham (4) tries to shrug off Texas A&M center Tyler Davis (34) on his way to the bucket during the first half, Saturday, Jan. 27, 2018 at Allen Fieldhouse. by Nick Krug

The 1-3-1 breakdown from KU’s 79-68 win over Texas A&M features a Bill Self-style player making a Bill Self-style play, an analysis of one slumping player and a highlight from one of KU’s most consistent guards. If you have any plays or sequences you’d like to see GIFed please tweet @ChasenScott or comment below.

Play of the game: He does what he does —

While the Jayhawks played most of Saturday's game comfortably in front of the Aggies, it wasn’t until a play with about 2-and-a-half minutes left that the game felt truly over.

With 2:45 to play and the Jayhawks up 11, Svi Mykhailiuk pulled up for 3 but missed. Udoka Azubuike tapped the rebound away to Marcus Garrett, who reset the possession with a pass out to the top of the key.

KU coach Bill Self has praised Garrett for his ability to steal extra possessions, a trait that was on display on this play. However, one thing aiding Garrett in crashing the glass was something that has actually hurt the KU offense when he’s been in games this year.

Despite hitting a 3-point shot earlier in the game, Garrett was practically unguarded as he ran from corner to corner. The Aggies had two big men in the game, but 6-10 forward Robert Williams opted to stay in the paint instead of following Garrett to the perimeter, leaving the KU freshman with a free run to the hoop on the offensive glass.

Instead, Garrett ran to the rim, hauled in the board and, rather than going right back up, passed the ball out to Malik Newman. Newman scored to put KU up 13, effectively ending the game in a sequence that certainly factored into Self’s comments after the game.

"Thought he was, other than Svi, the best player in the game," Self said of Garrett, who also finished with nine points on 4-for-4 shooting. "I thought he played great. Best game he's had in a long time."

Few would’ve predicted the recent slump of Lagerald Vick after non-conference play. Vick, who opened his season with a 23-point outburst against Tennessee State, crossed the 20-point threshold five times in non-conference play — and once more in the Big 12 opener — showing impressive growth after a season in which he did so only once.

However, since the Big 12 opener against Texas, Vick has been in a massive slide. Self has had conversations telling his wing he needs to do more, something that hasn’t yet materialized in games.

Vick, averaging 7.0 points over his last eight games after averaging more than 17 over his first 13, received a pass from Devonte’ Graham around the free throw line.

Like the game against Washington, when Vick was left open over and over by design of the Huskies' zone, he had plenty of room to operate and put up a floater.

No Aggies contested the shot, yet at the last minute, Vick attempted to thread a pass to Silvio De Sousa, who was completely caught off guard by the move.

Watching from the sideline, Self barked over at the junior.

The next possession, that's exactly what Vick did.

This time, Vick received a bounce pass from Mykhailiuk and turned and shot right away.

That aggressiveness was more of what Self wanted to see, but Vick actually had Newman wide open on the right wing. And if he had held the ball just a second more, Graham was sprinting to the right corner, meaning one of either Newman or Graham could’ve gotten off a wide-open 3-pointer.

Still, the one thing Vick did well on the play was that he didn’t hesitate. Self was unhappy that Vick didn’t drive later in the game when he had mismatches against the Aggies' bigs, but there may have been even bigger problems at work.

When Newman was slumping earlier in the season, Self spoke on several occasions about how he was overthinking things on the offensive end, sometimes leading to hesitancy and other times poor decision-making.

It’s tough to watch the following play and see anything other than a player going through something similar.

With the Aggies not matching up in transition, Newman was able to float a pass to Vick on the wing. Savion Flagg attempted to intercept the ball but missed, leaving Vick wide open for a 3-pointer.

Rather than taking an escape dribble — one dribble to his right to fully clear the defender — and pulling up, Vick used the first bounce as if it were a hesitation dribble, allowing the defense to react and rotate as he took one more step forward.

(Note how Jay Jay Chandler — No. 0 — rotated onto Azubuike, allowing Aggies forward Tyler Davis to rotate out to Vick.)

The swingman ultimately made his own shot more difficult, having to settle for a contested jumper over the long arms of the 6-10 Davis.

KU actually got the rebound on the air ball and scored later on the possession, but that wasn't the point. Instead, Vick was caught in between taking a 3-pointer and driving the rim, almost as if he were thinking about what the right play to make would be vs. simply making the right one.

Vick finished with 10 points, 3 rebounds and 2 assists in 31 minutes.

"I thought he was better," Self said, "but I don't think he put his handprint on the game."

It’s a pretty simple principle of basketball: If one player is doubled, somebody is open.

It may not be the best option — such as a poor shooter in an uncomfortable area — but sometimes it's exactly the opposite, a nightmare for the defense.

After gaining control of the ball in the backcourt, Graham dribbled to the top of the arc, where he was almost instantly doubled.

Immediately Vick flashed open, but the 7-foot Azubuike running by Graham actually blocked his sight from that option.

Just like a good quarterback, Graham stayed calm under pressure and went through his progressions. On the replay you can almost see his eyes bounce from Vick to Azubuike out to Mykhailiuk at the 3-point line.

Graham pump faked to Vick to force the defense to commit. He then floated the ball out to Mykhailiuk, who took care of the rest.

“Obviously it wasn't really good in the first half," said Aggies coach Billy Kennedy of the team's 3-point defense. "It just seemed like every bounce, every play, they made it. That's the mark of a really good team."

If it interests you - how 'bout a look at Vick's defense and rebounding. I think that's an area of real concern right now. He could provide a dramatic improvement to the Hawks...similar to Tyshawn Taylor when he finally figured it out and gave the effort.

I enjoy reading your analysis, Scott. You remind me of Jesse Newell. A great writer once kusports had. He predicts game outcome as if he's already watched the game. Not sure if he's a regular at Vegas... :)

Jerry - Check out the Graham article and the kstate gif in particular. It shows exactly what Coach says Vick and Newman are not supposed to do. It is one of the things Newman has turned around in the last couple weeks. Now we need Vick to follow as well.