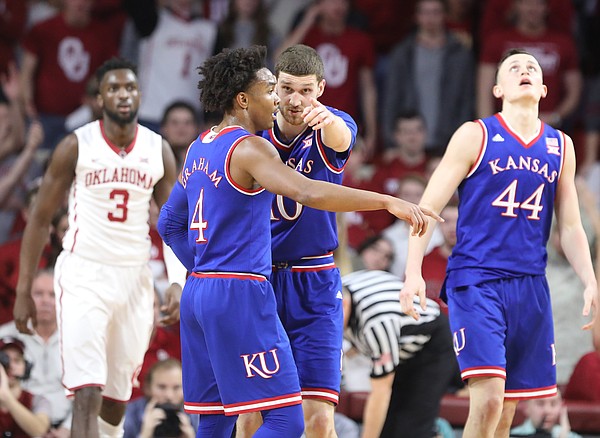 Kansas guard Sviatoslav Mykhailiuk (10) and Kansas guard Devonte' Graham (4) come together for a talk during the first half at Lloyd Noble Center on Tuesday, Jan. 23, 2018 in Norman, Oklahoma. by Nick Krug

Make no mistake — close games are seldom decided by only one play, player or sequence.

Yes, Udoka Azubuike went 1 for 8 at the line, but the Jayhawks could’ve scored in other ways.

KU missed 22 3-pointers — one or two of those might’ve changed the situation entirely — while Lagerald Vick, Svi Mykhailiuk and Devonte’ Graham shot a combined 15 for 44 (34.1 percent) from the field.

But once a close game gets to its final stages, every mistake is amplified, including one made by KU’s leader against the Sooners.

Devonte’ Graham was matched up on Trae Young for Oklahoma’s final possession of the 85-80 KU loss. Graham had done a decent job on Young, holding him to single-digit field-goal attempts for the first time this season and likely the first time in multiple years. (Young averaged better than 40 points per game in high school.)

So then it made sense for there to be extra attention on Young as Brady Manek came up to set a screen. But what happened was a lapse KU could not afford.

"The last one was on me," Graham said, admitting he and Svi Mykhailiuk were supposed to switch on the play.

Manek's screen was never set, as Mykhailiuk tipped his hand a little early and the OU forward sprung out behind the 3-point line, but KU had the right players in place to defend the play.

Mykhailiuk and Graham are more than familiar with each other, having played four years together and sharing a tight bond off the court.

It didn’t help them on Tuesday.

“We should’ve had the ball with a chance to tie or win,” Self said. “This happens a lot of time in sports. You know what you're supposed to do, but you think you can guard Trae better than the guy that you'd be switching with. And so you stay."

"That was a situation where they slipped the ball screen and obviously we didn't do a good job. ... And he's a great shooter."

So much of Tuesday’s game was centered on the strategy of Oklahoma coach Lon Kruger to have his team intentionally foul KU’s Udoka Azubuike, but various things around and during that time also went under the radar.

For example, if Self had deviated from his normal strategy, or if the referees had chosen to call a foul earlier in the game, Azubuike would’ve never been in that situation in the first place.

Kruger, who told his team to foul with about 3 minutes left, almost didn’t have to worry about the big man. Azubuike committed two fouls in the first half and was subsequently pulled, playing only five minutes.

Then he picked up two more — and nearly one on top of that — which might have revealed a way Self could get around the free throw issues altogether.

Azubuike crashed into Young chasing after an offensive rebound. The fans in Norman wanted a foul, but with Young having the ball and remaining upright, it probably was best for both teams if play continued.

Had Azubuike picked up a foul there and had Self stuck with him until he fouled out, the situation itself would’ve been avoided. That isn’t to say Self made a mistake in subbing in the first half to preserve his big man, but it certainly wasn’t the only time a foul call affected a strategy.

Moving into the actual intentional-foul part of the game, which started with KU up 2, Kruger tasked forward Matt Freeman with committing the fouls on Azubuike.

Freeman entered the game with 0 fouls, so there should have been five instances when Azubuike was at the line.

Instead, there were four. Here’s why:

Freeman stuck his shoulder out into Graham, and the KU guard did a good job selling the play. It took one of the five fouls from Freeman, and since Khadeem Lattin already had three fouls at that point, it meant one less possession where the Sooners would intentionally foul.

KU, though, didn’t seem so sure.

With the Jayhawks ahead by 1 after Azubuike’s final free throws and Young committing a turnover to give KU the ball back, Self pointed for Azubuike to go to the corner and then called a timeout.

KU came back out of the timeout and Self stuck with the alignment, opting to put Lagerald Vick in front of Azubuike to offer some protection in case someone tried to intentionally foul.

Kruger, though, was well prepared.

While Graham dribbled aimlessly, Kruger gestured for his players to sag off Vick and Azubuike, leaving nowhere for Graham — or anyone else — to drive.

Graham hoisted up a 3-pointer that missed. OU came back down the court and took the lead.

And on the other side

Since I began this story by talking about the defensive lapse by Graham, I think it’d only be fair to end on the play that preceded it.

After all, one play does not a game make.

With KU down 2 and Malik Newman with the ball, Young tried to go around an Azubuike screen, giving Newman an extra step as he drove toward the hoop.

The defense collapsed and Newman made the right play, dishing it to a wide open Mykhailiuik. The shot just didn't fall, and Newman couldn’t come up with the board.

Sometimes, that's the difference between a win and a loss.

Thank you Scott, I always enjoy your analysis. More than Doke's free throws, I amconcerned about what a complete non-threat Vick has become on offense. And any other aspect of the game for that matter. It seems like KU is playing 4-on-5 when he is in the game.

Ditto, here. From those last 2 ghypies, it's clear that our offense is waaay too slow compared to OU or even TCU. Five 'Tae's, Vick's or Newman's dribbles - each could've been translated into Young's wreck-havoc setup to one of his mates. Or a layup. Pick-n-roll or a lob. Standing around in perimeter will only work if you shoot like NBA guys. You have better chance when the ball move towards the basket. Fool your defenders. Fake moves. Fake shots.

BTW, Scott, do you have gyph for those fake shots done by OU that cost us a couple of and-1s? Different OU players know how to fool KU players by faking their shots..