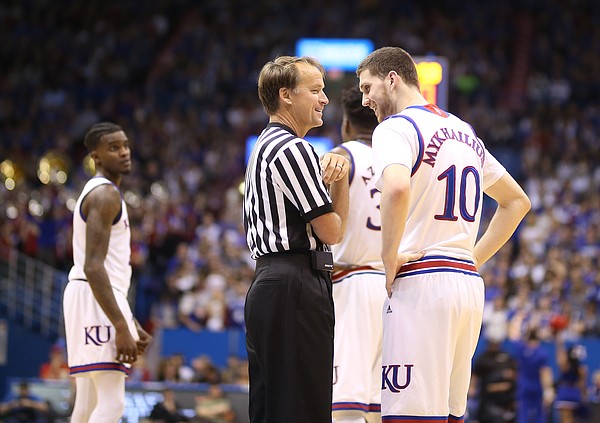 Kansas guard Sviatoslav Mykhailiuk (10) has a laugh with official John Higgins during the second half, Saturday, Jan. 20, 2018 at Allen Fieldhouse. by Nick Krug

Down the stretch of Kansas’ claw-it-out home win over Baylor, it seemed like the then-No. 10 Jayhawks couldn’t get a stop.

For a four minute stretch, starting at the seven-minute mark in the second half, the Bears scored on nine — yes, nine — straight possessions, but it wasn’t all bad defense, at least in a traditional sense.

On two of those possessions, the Bears were helped out by offensive rebounds, one of which led to a KU foul and another to a Baylor 3-pointer. So when it came time for the Jayhawks to come up with a stop, they needed not only to force the Bears into a miss, but to close out the possession with the ball.

Clinging to a one-point lead with less than 10 seconds left, Devonte’ Graham was matched up on Manu Lecomte, who was all-but certain to take the final shot.

In the corner, Lagerald Vick guarded Jake Lindsey, who had attempted only one shot on the day and wasn’t much of a threat. Lecomte drove into the lane, and Udoka Azubuike moved over to help contest the shot.

Vick did his job, executing on the fairly standard defensive rotation to get into position to defend and box out Baylor 7-footer Jo Lual-Acuil. Vick’s positioning wasn’t perfect, but he was able to nudge the big man forward under the hoop enough to prevent the easy putback.

Graham grabbed the board and was fouled. KU held on to get the win.

KU coach Bill Self has talked plenty about the potential of playing with two big men in the lineup now that Silvio De Sousa is eligible, at least for a few minutes each game.

The first look at what that might entail came against the Bears, though the stretch lasted all of one-minute and 40 seconds.

While it remains to be seen how effective the lineup will be, it was actually pretty solid on a first go-around. Offensively, KU went to a high-low look and got De Sousa involved with an early touch. Baylor was in its zone, though, so there wasn’t much room for him to operate.

(Keep in mind this was Baylor’s hybrid 1-3-1 zone, meaning Self wasn’t putting De Sousa in the middle of it like he would with Vick in a standard 2-3 zone.)

Yet there were some positives.

Early in the game, the Bears aggressively doubled Azubuike in the post. He made a couple nice plays, finding cutters for baskets, but it allowed the Bears to dictate where the ball was going and foul quickly without fear of Azubuike being able to go up and score.

With De Sousa in the game, all the newcomer had to do was walk toward the hoop to keep his defender from leaving. Azubuike had a chance to go one-on-one in the post, though the result was simply a foul and free throws instead of a basket.

Finally, on defense, there wasn’t much to look at. The Bears only had two offensive possessions with De Sousa and Azubuike in the game, but they struggled to get the ball inside at all on the first and had to settle for a Lindsey 3-point jumper.

There was a little hiccup on the baseline, when Svi Mykhailiuk incorrectly expected Udoka Azubuike to follow a shooter out to the corner, and another when Malik Newman didn't rotate late in the play after De Sousa recovered (note that De Sousa actually points to where Newman needs to go), but ultimately KU did a solid job until the end.

The final part of the play — De Sousa fouls his man trying to grab the rebound — came because the freshman ran in to get the rebound instead of just putting his body into his man, at which point Graham or Newman would’ve come up with an easy board.

But that's a forgivable mistake. And fixable, too.

No calls in Allen Fieldhouse? —

Opposing fans on Twitter — and coaches, occasionally — seem to have no problem calling out the Big 12 referees.

In non-conference play, there wasn’t much reason to do so with regard to KU. However, recently, the Jayhawks have been getting to the line more — check out the statistic below from Chris Stone — which means the Twitter conspiracists are back.

Doing some early poking around for Friday’s Big 12 column and here’s a fun one: Kansas ranks 340th nationally in FTRate for the season but 1st in Big 12 play. Think Bill Self got through about getting to the basket more?

None by Chris Stone

OK. So the play above is probably a foul, especially the way it looks in real-time. But if you slow it down, the no-call is a little more understandable.

Azubuike, who comes off his man to contest the shot, takes a step forward and leaps up to try and block the ball. There’s a lot of contact, but it’s actually fairly close to being legal, had Azubuike maintained absolute verticality.

In any event, though, teams should never rely on an official to bail them out. Fran Fraschilla, who called the game for ESPN, previously made the point that all coaches hope for is a fair whistle down the stretch. While there's certainly no disagreement here, a point made by Self after the K-State game is just as valid.

"I would guess over the course of the game (and season)," Self said, "it would pretty much balance out."

Love these pieces of analysis with the film to support. Great job Scott!

Part of the reason for the Jayhawks not getting to the line early in the season could be because of their margin of victory in the non conference schedule. The opposing team wouldn't be looking to extend the game the way a team would in the closer games of the big 12.

Great analysis - i like those Giphies, Scott! Keep it up! If I may add, what ifs...

Gyph#2: Vick could've faked a shot in the corner then take off for a layup/dunk or a lob to Dok if his defender came toward Vick.

Same gyph, Newman should've cut - asking for the ball (instead of turning his back) so Vick could bounce pass or simply pass to Newman. Vick could also just drive and pass the ball deep to Dok whose got position established.

Gyph#4: excellent point. Silvio got pushed a bit, but you're right, he should be able to seal his defender ahead of time.