How Malik Newman rebounded from a bad outing by, well, rebounding 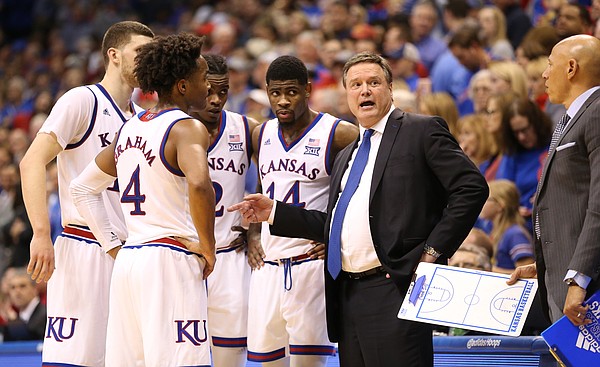 Kansas head coach Bill Self brings in the Jayhawks during a timeout in the second half, Tuesday, Jan. 9, 2018 at Allen Fieldhouse. by Nick Krug

It isn’t often a player can score 27 points — a career-high at that — yet the most impressive part of his performance comes elsewhere.

Malik Newman’s outburst against Iowa State, an 83-78 Kansas win, was a welcome sign for KU fans. It was the same way for the redshirt sophomore, who knocked down 10 of his 21 field goal attempts in the win.

“It was a good one,” Newman said of his game. “Yeah, I can say (it was a breakout performance). Maybe.”

Some of Newman's struggles had been overstated. For instance, he had shot a respectable 17-for-35 in the four games leading up to the previous contest, against TCU, far from the numbers you'd expect going off some of the reactions on social media.

Other criticisms, however, were completely valid.

Newman shot 50 percent from 3 in his first six games, but saw his numbers tail off shortly after. In fact, after sustaining a head injury against Arizona State, Newman shot 4-for-19 from 3 over his next six contests. He was held without a made basket twice in that span.

The one thing he did consistently, though? Rebound.

Aside from the TCU game, arguably the worst of Newman’s collegiate career, the 6-foot-3 guard had snagged at least three rebounds in all but one of the Jayhawks' previous outings.

For reference, Udoka Azubuike, who is nine inches taller than Newman and outweighs him by nearly 100 pounds, has had the same number of games this year with two or fewer rebounds (two). In 16 games this season, Newman has actually grabbed more defensive rebounds than Azubuike four times, the same number of defensive rebounds twice and one or two fewer than Azubuike an additional five times.

“The reality of it is, Dok and Mitch (Lightfoot have) got to rebound better,” KU coach Bill Self said in a press conference leading up to the TCU game. “Dok gets four rebounds when there are 38 missed shots. That’s not good enough. He’s got to rebound the ball better.”

Said another way, KU has played 16 games this season. In five of them, Newman has posted an even or better defensive rebound rate than Azubuike — meaning he’s grabbed at least the same percentage of available defensive rebounds when he’s been on the court in about one-third of KU's games.

“The thing about it is, with Dok, there are so many more ways to impact the game (than scoring),” Self said after the win over Iowa State. “He’s got to rebound the ball. There were some possessions there in the first half where he never jumped. That doesn’t bode very well when you’re small and your team doesn’t rebound the ball very well.”

Still, if those numbers seem a little fishy to you, the last game provided plenty of visuals as to why they shape out that way.

No rebound illustrated KU’s woes in that area more than Azubuike’s board with 5:12 to play in the first half.

As a shot went up from the right wing, Newman put his body into Iowa State’s Hans Brase, who had a six-inch, 40-pound advantage.

Azubuike, with a decisive size advantage on his man — the 6-9, 225-pound Carmeron Lard — simply held his ground, reached up and grabbed the easy board.

Such a sequence was the polar opposite of the strategy employed by the Oklahoma City Thunder last season, when the team's big men would go out of their way to shield off defenders so that Russell Westbrook, the eventual NBA MVP, could snag easy boards and bring the ball up the court in transition.

So what? Those rebounds are a deadly weapon for OKC. pic.twitter.com/FttEI75Kld

None by SB Nation

But what happened on the KU play wasn’t some kind of a strategy. It was more representative of Azubuike's struggles.

Earlier in the season, Self called Azubuike out for his rebounding, adding that KU doesn’t have enough players rebounding the ball above the rim, which should be a strength of the 7-footer.

If there’s one player who can — and does — rebound above the rim, though, it’s definitely Newman.

One of Newman’s more emphatic rebounds on Tuesday came with just under seven minutes to play in the first half.

After an Iowa State 3-point attempt, Azubuike was too far out of position to get a body on Solomon Young. Devonte’ Graham came off his man to knock Young back just a touch, but it would’ve been an easy Iowa State offensive rebound if not for Newman swooping in and collecting the ball over two big men.

Newman continued to fight for boards into the second half, even as he started to light up the scoresheet.

With just over 16 minutes to play, Lindell Wigginton took a shot from the right side of the key. Azubuike got back toward the hoop, but again just stood around rather than trying to put a body on his man, who ran back into the paint.

Newman, the only KU player to box out on the play, was shoved in the back, but still came up with the rebound.

“He played great,” Graham said. “He was just active. That’s what coach has been asking of him.”

The final highlight rebound of Newman’s day was far more in the Oklahoma City-style.

Five minutes after Newman’s leaping snag, he stood at the top of the key while Lard took a jumper late in the shot clock. Newman ran back toward the hoop and grabbed an athletic, albeit easy, rebound, since Marcus Garrett did his job boxing out Brase.

This time, things came together perfectly.

Newman sprinted down the court to the right wing. He took a step-back 3, perhaps an ill-advised shot given his shooting woes entering the game, but he shot it with plenty of confidence and it fell through the net.

All in all, Newman snagged eight defensive boards, five of which came in the second half. Of those five, the Jayhawks scored on four of the following offensive possessions.

Newman's eight rebounds tied for the team lead against Iowa State and came up one short of a career-best total he notched in a win over Kentucky earlier this season. Yet he was hesitant to declare himself fully back based off just one performance.

“At the end of the day, you just have to keep grinding,” Newman said, “get yourself out of that hole.”

thank you newman for actually putting in the effort to rebound and box out! Even when you are struggling with other aspects of the game. It seems like with Svi, Azuibuike, and half the time Vick....they just stand there....don't make any attempt to go get a rebound....literally, just stand still when they are like 8 feet from the basket and no one is between them and the basket for a rebound...it's infuriating....

A common comment a great rebounders, especially undersized players, is that they have a great feel for the trajectory of the ball and the karrom off the basket. That is something that will be less prevalent in an inexperienced player like Dok.

Coach has talked about another characteristic- relentlessness. And that needs to be the case for all of the players all of the games all of the plays. Vick and Svi have both had games when they were very active, it is difficult to maintain with the usage rates being required. It is why many were hoping Sam would be able to help just by giving the starters a break so they could be fresher throughout the game.

Also, on the middle play Dok was out of position and Devonte was on his man because of what Coach demands. It is called a defensive rotation. Vick also came over from the weak side to box out Devonte's man.