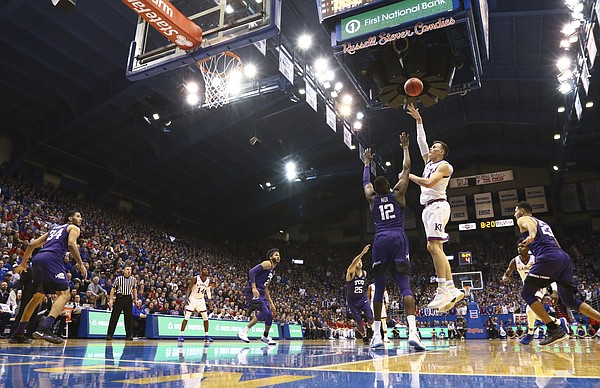 Kansas forward Mitch Lightfoot (44) turns for a shot over TCU forward Kouat Noi (12) during the first half on Tuesday, Feb. 6, 2018 at Allen Fieldhouse. by Nick Krug

Svi Mykhailiuk was held to just two shot attempts by TCU. Today’s 1-3-1 blog explains how the Horned Frogs were able to smother the senior guard, plus a look into a pair of smart plays made by Udoka Azubuike and Mitch Lightfoot in the Jayhawks' 71-64 win over TCU. If you have any plays or sequences you’d like to see GIFed please tweet @ChasenScott or comment below.

Udoka Azubuike had probably his best rebounding game of the season against TCU. He hit two huge free throws when TCU fouled him intentionally and made six of his 10 shots from the field.

Yet his biggest — or perhaps smartest — play, was what sparked a slew of compliments from ESPN broadcaster Fran Fraschilla.

“You see what Dok just did on that rebound?” asked Fraschilla, calling the game on ESPN. “That’s a heads up a play. Smart play.”

Ahead by just five points with 25 seconds left, the Jayhawks defended a TCU possession and forced a contested 3 by Kenrich Williams.

Azubuike showed good awareness, finding and boxing out TCU big man Vlad Brodziansky and leaping to rebound the ball — above the rim, the way Self likes. Still, it was just a five point game, and with KU shooting a 1-and-1 on the next TCU foul, things were far from over.

The 7-foot, 280-pound big man made sure he wouldn’t be the one deciding things at the line.

“He got the ball in the air,” Fraschilla said, “and he got rid of it before they could foul him.”

It certainly shows some growth.

Azubuike, who erupted for 26 points and 10 rebounds — though only five defensive boards — recorded what should have been the game-ending block and board against Nebraska. However, after grabbing the ball with about five seconds left, he waited an additional 1.1 seconds to chuck it up the court.

Today's 1-3-1 blog will feature this play — what Udoka Azubuike did wrong and how he fixed it against TCU. pic.twitter.com/WVAf8nsolE

For some reason, Nebraska's players did not immediately foul, a decision that ended the game. Even if Azubuike, improbably, made two free throws, Nebraska would’ve had at least four seconds left and a couple of timeouts to figure something out down three.

This time, Azubuike didn’t leave it up to the other team. He found Malik Newman and that was that.

A trend: How TCU frustrated a KU senior —

Svi Mykhailiuik’s dunk at the end of the above play carried with it some frustration. Yes, it earned him a bit of a talking-to from a nearby referee, but it was one of the only opportunities he even had to put up a shot in the second half.

After tabbing 70 shot attempts over his last four games, Mykhailiuk was held to just one point on 0-for-2 shooting on Tuesday, mostly due to how TCU chose to defend him.

Mykhailiuk, who scored 20 points on 7-for-13 shooting in Fort Worth, seemed to be targeted by the Horned Frogs. Seldom did he have the chance to break loose on Tuesday, and even when he did, it wasn't for long.

On this play in the first half, Mykhailiuk slipped a screen and popped out behind the 3-point line. He was open for a split second, but then two TCU defenders quickly helped onto him, one of which actually left Devonte’ Graham wide open in the corner in the process.

With the TCU defenders guarding Mykhailiuk all the way out to the perimeter, it was a tough night for the 6-8 guard. Often times it was Williams who drew the primary assignment of guarding Mykhailiuk, but the Horned Frogs were quick to switch when he was involved in any action around the perimeter, keeping him from getting any space coming off a screen — although it did open Mykhailiuk up to drive past the bigger Brodziansky on occasion.

Sometimes it created other holes in the defense, too.

With KU running a 1-5 pick-and-roll, Kouat Noi likely would’ve either switched onto Graham or at least come out for a hard hedge. Sensing that, Mitch Lightfoot never set the screen and instead slipped to the hoop for the easy lay-in.

Later, TCU completely lost sight of Mykhailiuk. Noi helped on Azubuike on the post, forcing Williams to slide over and guard Graham. It’s clear that Williams was expecting Noi to eventually switch onto Mykhailiuk, but he didn’t, leading to a moment where Mykhailiuk was running across the court completely unimpeded.

Ultimately, the Jayhawks weren’t able to get Mykhailiuk the ball in a position to score on that play, which was often the case on Tuesday. Self noted afterward it was possible Mykhailiuk wasn’t feeling 100 percent, though he was quick to add the swingman wouldn’t use that as an excuse.

“I think TCU, they did a couple of subtle things that were really clever in defending us,” Self said. “We didn't force help off ball screens because of the way they switched it and did some things. There are some clever things they did that they deserve credit for.”

One that stood out: Just do your job

When Lightfoot scored his first basket as a starter, a layup after an offensive rebound, the Allen Fieldhouse crowd let out a roar. Lightfoot, who started the game at the four and moved to the five after Azubuike picked up his first foul, simply did his job, something that became a catch phrase of sorts for the player who held down the five-spot for KU last year.

Landen Lucas was never a specularly exciting player, but he did a number of things — positional defending, screen setting, sealing off defenders — that made KU as a team better on both ends of the floor when he was in the game. Lightfoot channeled one of those in his start on Tuesday, making an unspectacular play that led to an easy KU bucket.

Graham skied for the rebound off the TCU miss and had his head up as he came down the floor. He threw a pass ahead to Malik Newman, who drove right to the rim and scored.

Simple as that, right?

Watch Lightfoot on the play. He started out by the perimeter, guarding a big man capable of shooting in Brodziansky. When Graham secured the board, Lightfoot ran down the floor and into the paint.

Newman caught the pass from Graham in the right corner and drove around Brodziansky to the hoop. There should’ve been help from TCU’s Alex Robinson on the drive, but Lightfoot positioned his body and stuck out his arms to seal off the defender and allow Newman an easy path to the rim.

It wasn't a flashy play — quite boring, actually — but it's exactly what KU needed.

Loved the Lightfoot screen. When it happened I said they should give out assists for plays like that. My guess is that Coach already does, which is why players like Mitch and Marcus see minutes on their feet, and why others complain about some players on the seats.