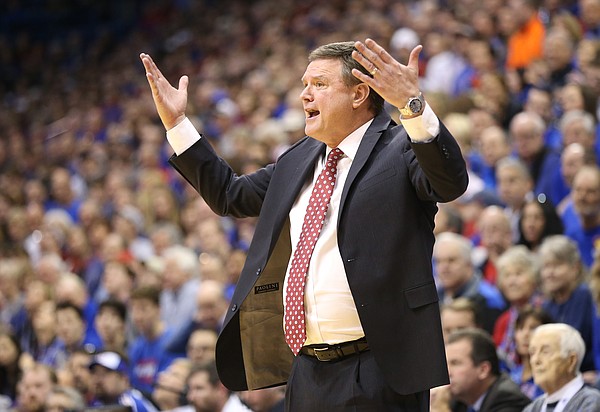 Kansas head coach Bill Self reacts to a call during the second half, Saturday, Feb. 3, 2018 at Allen Fieldhouse. by Nick Krug

The 1-3-1 breakdown from KU’s 84-79 home loss to Oklahoma State explains how the Cowboys were able to steal 24 seconds away in the final minute-and-a-half, plus a look at some of the plays leading up to Lagerald Vick’s benching. If you have any plays or sequences you’d like to see GIFed please tweet @ChasenScott or comment below.

Play of the game: Every second counts —

As a college basketball fan I’ve always been confused as to why teams don't play the clock more. Think of the following scenario:

There are 45 seconds left in the first half. KU has the ball, inbounding under its own hoop. What happens next?

In this scenario, KU will almost always hurry to get the ball inbounds and take a quick shot to secure the 2-for-1 — a concept that allows KU two of the last three possessions of the half. The Jayhawks might get the ball back with seven seconds or so remaining, but two attempts at a shot, even if they're only shots that would go in 25 percent of the time, still give them a pretty good chance to end up with some points.

But Oklahoma State doesn't have to comply.

Since the clock doesn’t stop on a made field goal in the first half, the other team could legally stall for five seconds — or semi-legally stall for even more time — and minimize that difference. Oklahoma State did exactly that in the second half on Saturday, and it turned out to be pretty important.

There is 1:03 left when the referee starts his five count.

There are 58.2 seconds left when the shot clock starts.

There are 55.2 seconds left when KU takes its foul to give.

Doesn't the clock stop in the second half, though? If you're like me, you were a little confused about the ruling.

However, the NCAA rules only state that the scorers stop the game clock when “a goal is successful (clears the bottom of the net) in the last 59.9 seconds of the second period or any overtime period,” leaving a loophole of sorts for baskets that are counted just before the clock dips under a minute.

So the shot goes in at 1:08 and should be inbounded by 1:03, but the Cowboys are — likely intentionally — slow getting to the ball, leaving time for players to get into the right positions and, more importantly, taking nearly 15 percent of the remaining time off the clock.

Since KU wasn't in the bonus yet, the Cowboys got another chance to inbound the ball. It looked like KU was trying to foul on the ensuing inbound, but the Cowboys were able to go end to end and score with just over 48 seconds left.

All in all, the Cowboys were able to run 20 seconds off the clock and score two points on the exchange. Considering how they started the possession, up six with just under 70 seconds to play, they probably would've taken either result, let alone both.

Oh, and don’t believe me that coaches use these things to their advantage? Watch Bill Self’s reaction on this play.

Grabbing film for my 1-3-1 blog. Just watch Bill Self in this GIF. His awareness is ridiculous.

Self is *furious* that Mitch Lightfoot doesn't hold the ball for an extra second to kill the shot-clock differential. pic.twitter.com/txn81ewCCR

A trend: So what about that start? —

If a player is going to rack up 32-plus minutes, mistakes are going to happen. It’s almost impossible to play that many minutes in a game — let alone to average it for a season — and not have lapses. Yet not all mistakes are created equal.

A mistake with six minutes left in the first half when you haven’t gotten a breather all game can be forgivable. Mistakes one or two minutes into the game? Not so much.

Unfortunately for Lagerald Vick, he didn't even last that long.

Let’s take a look at the first possession of Saturday’s game.

KU was switching on the perimeter, evident by how the guards defended the action by Oklahoma State. Vick even pointed for Svi Mykhailiuk to swap onto another defender at one point, so there were no misunderstandings by the players. At least until the end of the play.

Jeffrey Carroll came off a pair of screens. Devonte’ Graham had no chance to fight through them all the way out to the perimeter, but he didn't have to. Carroll became Vick's responsibility, with a nearby Udoka Azubuike sagging into the paint.

Vick didn't recognize what was happening — even after Graham bumped into him from behind — until it was too late. He gave up a wide-open 3-pointer to a player who had hit at least two of them in 11 of his last 13 games. KU got bailed out by a miss.

I’ve included what happens next in the GIF because it feels just as important. Vick runs down the court, catches a pass and pulls up for a 3. He had the opportunity to drive by a forward who was closing out, but it’s not a terrible look.

But when you compound it with what came before — and add in what happens next — it starts to be a part of a trend.

Self was probably already about to blow up, but the explosion could’ve at least been delayed to the under-16 media timeout. KU allowed an offensive rebound on its second defensive possession, which featured several players standing around, but there was no need to panic, at least until it happened again with four KU players in and around the paint.

While Vick shouldn’t have necessarily been the one who came up with the rebound, he had already started walking away from the play as if the board were secured. Then he stood around for the rest of the possession, becoming the target of a Self hand-gesture after the Cowboys finally scored.

Now watch what happened next.

A big thank you to Michael Coover (@MichaelCoover) for pointing this play out on Twitter.

Again, by itself, this play wasn't too big of a deal. Vick dribbled the ball off his foot and it went out of bounds. It happens.

But given the way he started the game, giving up an open 3 and an offensive rebound and missing a 3-pointer early in the clock, that’s the type of effort, or lack thereof, that will drive a coach crazy.

And if there are that many plays like that in the first 184 seconds of the game, it’s not hard to figure out why Self might want a different body in the starting five.

One that stood out: One more from the end —

Earlier in the year, when KU defeated Texas in Austin, I pointed out a pair of instances where Texas coach Shaka Smart disadvantaged his team by putting his best defensive player on the inbounder…

Also never understood why they don't press more, but an example of this... Around 9 1/2 minutes left, Texas puts Mo Bamba on Devonte' Graham for the inbound (in zone). Now he's not by the hoop. Vick makes a simple cut and gets a layup. pic.twitter.com/9drf7htnH3

The other part of doing this... when you go to man, it's incredibly easy to keep Bamba away from the hoop for not only blocks, but also rebounds. This play resulted in a miss and a 50-50 ball rather than a secured board. pic.twitter.com/fOUDLO2jZH

They did this again. Graham pulled Bamba away from the hoop, blew by him with a good fake and drew a foul. pic.twitter.com/YTxkQdZPq5

When Texas switched to a man-to-man defense, KU ran offense to get the 7-foot Mohamed Bamba isolated onto Graham on the perimeter, meaning the big man was away from the hoop and couldn't help on drives and rebounds.

It’s a little thing, but it’s something that resulted in points for KU on two out of three possessions. Point is, it mattered. And so did this.

Also, on in-bounds, why was Graham guarding the guy OSU wanted the ball to go to? He had 4 fouls. He should have been guarding in-bounder or been the roamer. Cost more time.

None by Kyle Cornish

Kyle raises an interesting point I thought it would be fun to explore.

With only 14.2 seconds left and KU down 3, the strategy wasn’t all that complicated: Go for a steal and then foul. There wasn't much time to waste.

Oklahoma State put KU between a rock and a hard place.

As Kyle points out, the Cowboys seemed to want to inbound the ball to Kendall Smith, who was being guarded by Graham (four fouls). Smith came off a screen and caught the pass. Graham couldn't foul or he’d be out of the game.

The Cowboys were ultimately able to run four seconds off the clock with this strategy, as Graham was only able to haphazardly poke at the ball and chase after Smith until Marcus Garrett took the foul. But by that point, nearly one-third of the remaining time had bled off the clock.

So going back to Kyle’s question, why wasn’t Graham on the inbounder? He doesn’t really have the length to bother a passer — as would Vick or Mykhailiuk, who guarded the play — but that hasn’t stopped KU in the past.

In thinking about the most iconic moments of Frank Mason’s KU career, three immediately came to my mind. The game winner in Madison Square Garden was first. His dive into a table at K-State followed by an improbable return to the play and steal was second.

"Those plays define seasons," Self said at the time.

If you’re like me, the third play you remember is what he did in triple overtime against Oklahoma. Mason crowded Buddy Hield on the sideline as he went to inbound the ball. He jumped up and down, swarming Hield and eventually knocking the ball away and coming up with a controversial game-winning steal.

There are some obvious differences, including where the ball was being inbounded, but it's an interesting question to ask: With four fouls, should Graham have be put in the same situation? Will he be next time?

We’ll just have to wait and see.

I did notice at the game that the ref's were making KU give the inbounder at least a yard of space to get the ball in, that's something I've never seen before. Usually they just wave their arm between the two players, but Saturday they insisted on a player moving well away from the inbounder. RCJH