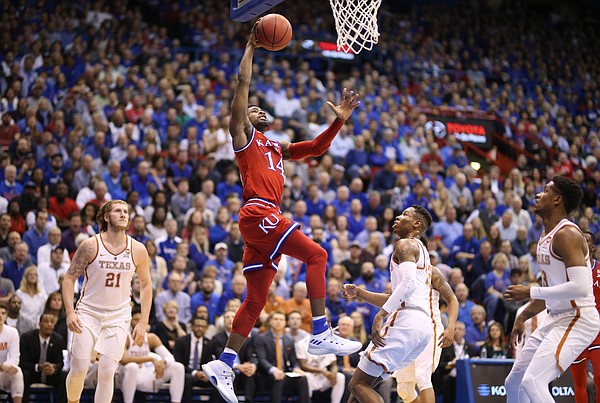 Kansas guard Malik Newman (14) elevates for a dunk against the Texas defense during the first half on Monday, Feb. 26, 2018 at Allen Fieldhouse. by Nick Krug

Since coming to the Big 12, Shaka Smart has yet to earn a win against Bill Self — like he did as the coach of VCU. Today's 1-3-1 blog explores the coaching matchup between the two, plus a play by Malik Newman that brought back memories of another five years ago. If you have any plays or sequences you’d like to see GIFed please tweet @ChasenScott or comment below.

The Jayhawks were never really in danger of dropping Monday's game against Texas, yet they weren't able to put it entirely out of reach until late.

For that, every time Texas crawled to within six or eight — or some similar score — the Jayhawks had an answer. Some of them were louder than others.

In a game where coach Bill Self praised the energy of Udoka Azubuike, it was exactly that on display to start the sequence. With the Jayhawks unable to secure the rebound initally, the 7-foot, 280-pound Delta, Nigeria native dove on the floor to grab a loose ball.

Azubuike kept his composure and flipped the ball to Newman, who brought it up the court to begin the weave. Azubuike, who was late down the court, eventually caught the ball at the top of the key, becoming part of the weave as he took a dribble to his right.

Azubuike handed the ball off to Newman, who was initially guarded by Kerwin Roach. Roach was screened by Azubuike and wasn't able to fight through it.

Perhaps he was expecting to switch since Texas defended the initial action between the guards by switching, but he almost certainly wouldn't have been supposed to switch onto Azubuike. Teams will often defend the weave by switching either 1-through-3 or 1-through-4, meaning they'll switch at every position except with the big men on the floor.

Newman pulled up from 3 and knocked down the shot. KU, which had seen its lead cut to six less than 90 seconds earlier, went back up by 11.

It was that kind of game.

A trend: Creating a mismatch —

Shaka Smart does something that absolutely baffles me.

When the other team has the ball out of bounds on the baseline, he sticks the tallest player on the inbounder, creating a mismatch from the jump.

In an early Twitter thread — recapped in the 1-3-1 blog from the OSU game — I dissected how KU took advantage of that mismatch on three separate occasions in Austin.

The rematch was no different.

On the first instance, Graham was guarded by 6-9, 240-pound Texas big man Jericho Sims. Graham passed the ball to the corner and Sims doubled, which forced Texas’ other big in the game to rotate onto Graham.

The action left the two Texas big men — and one guard — guarding KU’s two smallest players. It looked as though Matt Coleman, the guard, should've stayed on Newman with the two bigs dropping back down into the paint, but that would've left Sims on Graham, which would have been a total mismatch.

Regardless, the end result was a wide-open Azubuike under the hoop. Clay Young found him with a perfect chest pass and the rest was easy.

Things went a little differently the second time, but the result was the same.

Graham inbounded the ball and pulled 6-10, 240-pound James Banks away from the basket. He isolated him on the right wing and settled for a long jumper.

Objectively, you’d have to say Texas won the exchange. But it wasn't over.

Because Banks had to turn and chase the rebound from the perimeter, he wasn’t able to box anyone out or get into position to haul in the board. In the meantime, Lagerald Vick was matched up with a smaller Jacob Young.

Vick sidestepped Young and grabbed the board. He kicked the ball out to the perimeter to Graham, who swung it to Mykhailiuk. The Texas defense was already scrambling at that point, and it was nothing but target practice for a wide-open Mykhailiuk.

The crazy thing is, it wasn’t even the last time KU scored off the Smart-inbound-defending strategy…

On the third instance, Graham pulled 6-9, 245-pound Dylan Osetkowski away from the hoop by simply running to the 3-point line. Osetkowski initially pointed for someone else to take Graham, but with no one in position to do so, he had to guard the KU senior.

Graham noticed the mismatch and called for an isolation.

Note how he waves away the potential Azubuike screen.

He blew by Osetkowski off the bounce, which forced Sims to help. Graham dropped the ball off to Azubuike, who collected it and threw down a dunk.

You'd think at some point the Longhorns might try something a little different. Maybe in the Big 12 tournament.

One that stood out: Ring a bell? —

It’d be difficult to imagine a more salivating opportunity for a guard.

Malik Newman caught the ball in the right corner with a Texas big closing out on him. Newman had to know that there was no chance of the defender staying with him if he put the ball on the floor, meaning he was essentially a dribble away from getting to throw down an emphatic slam.

If you’re like me, the dunk made you think of one from about five years ago.

Late in the first half of a 2013 revenge game against TCU, Ben McLemore caught the ball on the wing. There was a TCU player closing out to him, but he had no chance to actually get a stop.

McLemore took two dribbles and exploded to the rim for a dunk. The basket gave him 11 points on the game. At that point, TCU had only nine, but I digress.

Today's 1-3-1 blog (from KU-UT) includes a play that reminded me of this dunk.

(Yes, I'm tweeting it so I can embed it easier.) pic.twitter.com/WqkpvVTyxX

I didn’t just bring up that play to talk about the history. Rather, it felt worth noting how KU was able to get such an easy opportunity in the first place.

Off the Texas miss, Mitch Lightfoot executed on a boxout and Graham rebounded the ball. The sequence was similar to a strategy employed by the Oklahoma City Thunder, where the big men would leave rebounds for Russell Westbrook, so he could start the break the other way upon catching the ball.

That wasn’t always the case for KU this year.

After the Iowa State game in Allen Fieldhouse earlier this season, I wrote about a sequence in which Newman actually boxed out an opposing big man so Azubuike could get an easy rebound. That didn't allow KU to break, since there were three KU players standing 90 feet from the hoop by the time Azubuike passed the ball ahead.

But this time, with Lightfoot doing the hard work, Graham was able to get the board and start the break immediately. That left the defense scrambling and set Newman up with the easiest two points of his career.

Perhaps the flashiest, too.

Love the details! Thanks, Scott.

A good reminder/similarity about Malik and McLemore, Scott. That should be one way to increase our scoring %. Fake shots. BTW, what's going on with Garrett? I'd like to see your analysis, aside being a good defender, on his progression from not so much of a scorer to an active attacker. I'm sensing he's comfortable attacking the basket now.