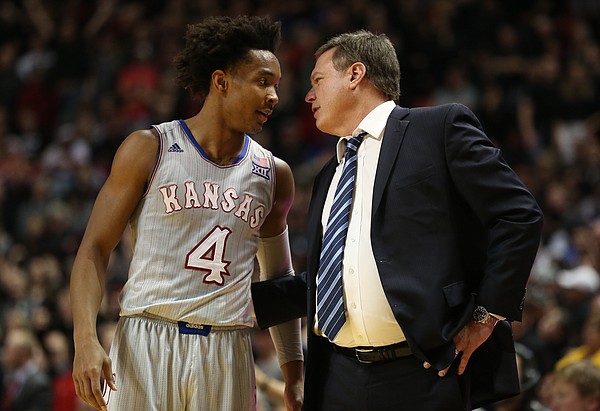 Kansas guard Devonte' Graham (4) talks with Kansas head coach Bill Self during a break in the second half on Saturday, Feb. 24, 2018 at United Supermarkets Arena. by Nick Krug

Devonte' Graham absolutely took over down in Lubbock. Today's 1-3-1 blog shows just how the senior did it — on both ends — as the Jayhawks clinched a record-setting 14th straight Big 12 title. If you have any plays or sequences you’d like to see GIFed please tweet @ChasenScott or comment below.

Play of the game: Break the tie —

Devonte’ Graham hit dagger after dagger in his quest to help the Jayhawks defeat Texas Tech.

With about eight minutes left, Graham hit some kind of a Marcus-Denmon-in-Allen-Fieldhouse-only-it-went-in 3-pointer. With less than 40 seconds left, he pulled off an improbable finish at the rim to put KU up two scores.

(Keep reading, because you’re going to see both of those plays.)

But it was another shot, a simple isolation pull-up jumper that KU needed — NEEDED — more than any other.

KU led by eight with four-and-a-half minutes left. The Red Raiders then went on a 7-0 run in less than 90 seconds to cut the deficit to one. Thirty seconds after that, the game was tied. KU called timeout.

Out of the huddle, the ball went into the hands of Svi Mykhailiuk. He fired off a 3-pointer from the left wing late in the shot clock, and it missed. Mykhailiuk got his own miss — a worthy candidate for play of the game, too — and reset the offense.

KU’s next shot went to Graham. The senior cut to the hoop and went up for a two-handed layup. The shot was erased by Tech’s Zhaire Smith. Just 18 seconds on the shot clock remained.

Finally, with the clock down to seven seconds, he made his move. He crossed over at the top of the key and shook off Zach Smith. He pulled up for two and knocked down the shot that broke the tie.

You can’t win the game if you don’t take the lead.

I’ll admit, when the hashtag #BIDG appeared in my mentions I rolled my eyes. Some things — like the anthem that belonged to 2017 national player of the year Frank Mason — should probably stay with the player they were intended for.

None by David F

But for at least the second half of Saturday’s game, Devonte’ Graham was Frank Mason. He put KU on his back — on both ends — and would not let his team lose.

This play was almost identical to the first part of one made by Mason last year — save for a broken chair or two.

Against K-State in his senior season, Mason made a save while diving out of bounds. He crashed into press row but was able to fling the ball in bounds and eventually come up with a steal on a play that KU coach Bill Self later described as season-defining.

The Graham version didn’t have the steal at the end, but it had just about everything else.

Niem Stevenson passed the ball to Norense Odiase, who had his back to the basket. Graham rotated from the weak side to help in the post. He knocked the ball away and then chased after it, lunging toward the sideline and flinging it back over his head as his momentum carried him out of bounds.

Zach Smith picked off the heave, but he was pressured instantly by Marcus Garrett. Smith tried to drop it off to Keenan Evans but Svi Mykhailiuk read the play and got into the passing lanes before sprinting down the court to draw a foul.

If that sequence didn’t make you think of a Mason-sparked run, though, it was hard to think of anything else on a play Graham made late in the contest — even if it involved a bit of luck.

With the Jayhawks up two and less than a minute to play, a bucket wouldn’t quite seal the game, but it would start to make 14 straight feel a whole lot closer.

Graham dribbled at the top of the key to take valuable seconds off the clock for the Red Raiders. He crossed over on Jarrett Culver and began his drive to the rim with about seven on the shot clock once again.

As he drove, Graham carried the ball like a running back. He had the ball knocked down from his hands but he quickly regained control and launched up a prayer of a shot from his hip.

“That layup he made late was probably better lucky than good,” Self said.

For what it’s worth, Graham, a mere 44.2 percent finisher at the rim this season, agreed.

“The layup, it was a crazy wild layup,” Graham said. “That was definitely luck to go in.”

His next play? Not so much.

Immediately following the Graham layup, the Jayhawks sprinted back down the floor on defense. They set up in a 2-3 zone and needed a stop to seal the win.

Evans dribbled the ball up the court and then passed it off to Culver. As he did so, Graham fought through a screen and helped swarm the Texas Tech guard, poking the ball away to create a chance at a turnover.

Culver, a freshman, stayed on his feet while trying to pick up the ball. Graham, a senior, dove onto the court and knocked it away to Lagerald Vick.

It was a final reminder of Mason, who made plays on the defensive end over and over at game point throughout his KU career. Most notably, the former Jayhawk came up with a clutch steal in the World University Games championship round against Germany and did so again in the triple-overtime thriller against Oklahoma, poking the ball away from Buddy Hield while guarding the inbounds pass.

One that stood out: A role reversal —

I’m about to compare a shot by Graham to one of a Missouri player — a player who might have been the biggest reason for KU’s final loss to the Tigers.

There’s good news, though. The Missouri player missed the shot I’m talking about and it was in a game that KU won in Lawrence, not the one in Columbia.

The ridiculous 3-pointer Devonte' Graham made today (no spoilers, but it may be coming soon to a 1-3-1 blog near you) reminded me of another famous shot — err, missed shot — in #kubball history. pic.twitter.com/pd0ewSOw9F

Marcus Denmon could have buried the Jayhawks on Missouri’s way out of the Big 12. Up by three with less than 35 seconds left in Allen Fieldhouse, the guard dribbled against Travis Releford and launched a high-arching 3-pointer to beat the shot clock.

Denmon’s shot hit both sides of the rim and just narrowly missed. Thomas Robinson hauled in the board. The rest was history.

When Graham pulled up for a 3-pointer with eight-and-a-half minutes left, that was exactly the shot on my mind.

Only Graham made his.

With the shot clock winding down and Vick aimlessly dribbling on the perimeter, Graham backed up to half court to receive the ball. Vick’s pass was deflected, giving Graham all of four seconds and 40 feet to the basket to traverse to make a play.

Graham took one dribble with his left hand and pulled up while fading to his right. The shot swished through the net. And Graham was just getting started.

You can't win games if you're too timid to shoot. That's been KU's problem this year in games that we lost, nobody including Graham wanted to shoot the ball. We've gone 5 to 8 minutes without any good offensive play sometimes.

I don't know. What I saw DG moves vs TTU were not the typical coach BS offensive style, but they sure look really good. I don't see a lot with this team where guards cut inside (Svi to DG) - which would've been really awesome had DG made that dunk. BIFM has surely had some influence in BIDG. Graham should keep playing this way. Svi and others should follow.

Graham's plays are very noteworthy, but I was really hoping to see Svi's rebound putback. The one where he was cutting across the lane from left to right, caught the ball behind him on his right and still turned back to his left to put the shot back in all in one fluid motion. Maybe the most amazing play this season?