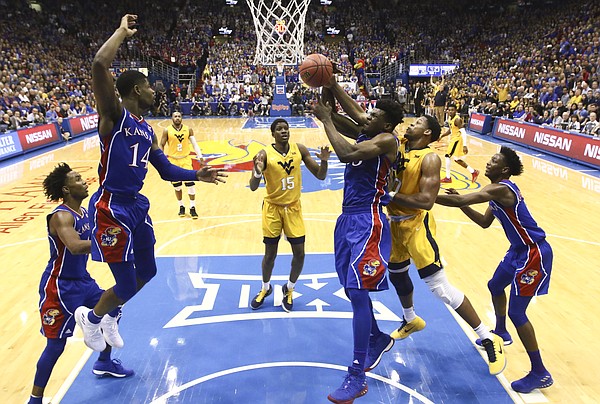 West Virginia dared Udoka Azubuike to make a play, and it was exactly what he did — three times, no less. Today’s 1-3-1 blog explains just how the big man came through on defense in KU's 77-69 win over West Virginia, plus a pair of plays that show how the Mountaineers may have taken their foot off the gas late. If you have any plays or sequences you’d like to see GIFed please tweet @ChasenScott or comment below.

Play of the game: ‘We attacked them’ —

If you’re like me, when you watch a game there’s usually a play or two that — for whatever reason — feel exponentially bigger than they actually are.

That play, to me, came at the 4:23 mark in the second half. KU was still behind by six when it began and five when it ended, but when I saw it, I couldn’t help but think back to the words spoken by the Jayhawks following their comeback win in Morgantown.

“I told the guys that I felt like they had kind of relaxed and taken their foot off the pedal,” Devonte’ Graham said at the time. “So we attacked them.”

This play started with a mishap, as Graham hit the floor on the defensive end of the court and was late getting down the floor. West Virginia doubled Lagerald Vick as he brought the ball up, but Vick was able to get the ball to a wide-open Graham as he joined the Jayhawks on offense.

The defense had to rotate and Graham swung the ball to Malik Newman. Newman's open 3-pointer was just off the mark.

As Newman’s shot went up, Svi Mykhailiuk watched for about a half-second and then sprinted toward the rim. He jumped up from one side of the restricted area and caught the ball with one hand on the other. West Virginia had four players in the paint during that time.

Mykhailiuk was instantly swarmed by Jevon Carter, one of the top defenders in the nation, yet he kept his composure, took what the defense was giving him — in this case, the baseline — and then found Vick. The play resulted in a foul and free throws, of which Vick made one.

Oh, and the Jayhawks went on a 17-0 run starting on the next trip down the floor. Try telling me that was a coincidence.

A trend: Udoka the defensive back? —

For those that don’t know, a cross screen is an action that can occur by the basket. Two players — usually forwards — will stand on either side of the paint. One will set a screen, almost always directly in front of the hoop, while the other runs from one block to the other.

The action isn’t especially hard to defend and can usually be switched, but when dealing with two players as dramatically different as, say, 7-foot, 280-pound Udoka Azubuike and 6-5 180-pound Marcus Garrett, switching isn’t necessarily the easiest thing to do. It'll create a pretty drastic mismatch.

West Virginia went to the action early and often against Kansas, but Azubuike almost singlehandedly disrupted it.

On one instance, just less than seven minutes into the game, Daxter Miles came off a cross screen from Sagaba Konate. Azubuike and Garrett switched, but Azubuike knew Garrett wouldn’t be able to handle the bigger Konate straight up.

As the pass came in, Azubuike jumped across the paint, grabbed the ball like a defensive back and was fouled.

“What an alert play by Udoka Azubuike,” said announcer Jay Bilas on the call for ESPN. “Playing the ball instead of playing his man.”

There was plenty more to come.

The next time the Mountaineers tried this play, they actually tried to disguise it a little better. Miles first faked like he was going to come off the screen and then faded back to the corner. Garrett, who was in good position to fight through the screen the first time, relaxed, and Miles sprung into action, coming off the screen and again forcing a switch.

This time, Miles kept running out to the corner with the hope of keeping Azubuike from being able to help on Konate, but Azubuike didn’t bite, reading the play the whole way and jumping to knock the ball out of bounds.

Oh, and he did it in the clutch, too.

Arguably the biggest defensive play of the game for KU came with about 25 seconds left. Miles, who had already hit six 3-pointers was wide open for 3, but he instead opted to sling a pass in toward Esa Ahmad in the paint.

Don’t get me wrong. This was an extremely ill advised pass, and one that should have never been made. However, Azubuike still had to have the awareness to come off Konate and knock the ball away to Graham.

And hey, if the whole basketball thing doesn’t work out, Azubuike could try his hand at another sport. After all, Kansas City Chiefs coach Andy Reid was watching in the stands. Maybe he could use an oversized free safety.

One that stood out: ‘Booooring’ —

If you go to enough high school games you’ll hear the same chant over and over when teams try to run down the clock and hold for the last shot of a quarter.

Up by 10 in the second half, West Virginia employed a similar strategy on Saturday. The surprising thing was how early it started.

With more than 8-and-a-half minutes to play, Carter was content to dribble out the clock. He waited until there were nine seconds left on the shot clock to even call for a screen. He started making his move with seven seconds left.

The eventual shot missed, but the Mountaineers got the rebound. Carter called for the ball and then dribbled back toward the top of the key, content to take 20 more seconds off the clock.

“I don’t know what the thinking was,” said KU coach Bill Self. “But I do think when you’re down double figures and the other team’s going to use 25-30 seconds every shot clock and they get 40 percent of their misses back, you would think you’re not going to have that many opportunities to come back.”

West Virginia coach Bob Huggins explained the thinking after the game, saying he told his team to take care of the ball — unlike the last meeting between the two teams in Allen Fieldhouse. He wasn’t totally on board with how things worked out, though, asking himself a rhetorical question to cement his point.

“Did i want them to run it down to nine seconds on the clock?” said an agitated Huggins after the game. “No.”

I love this analysis! It provides an even deeper understanding of the game and some great insight to some of the nuances that give each game its unique personality. keep it up! thank you!

Loved Dok's "DB" play in the paint. Not nearly as good as Clint Normore on Harvey Grant in 2008, but sweet none the less.

Those giphyies show how Dok can man-handle 2 guys inside - very solid defensive stand. When he spreads his arms (or pushes opponents away :) and his legs like that, none will get in his way!!! Great job on defense, Dok!!!! Great analysis, as always!!