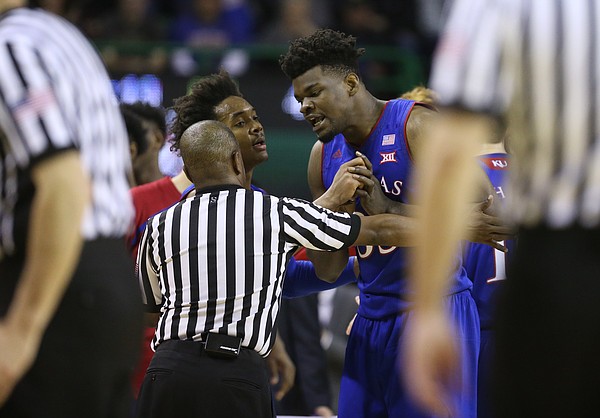 Kansas center Udoka Azubuike (35) is sent back to the bench by an official and his teammate Kansas guard Devonte' Graham (4) while protesting a call during the second half, Saturday, Feb. 11, 2018 at Ferrell Center in Waco, Texas. by Nick Krug

Udoka Azubuike snapped his head back and dropped the ball on the ground. Today’s 1-3-1 blog explains what went into his frustrations, plus how each of his fouls happened in Baylor's 80-64 win over the Jayhawks. If you have any plays or sequences you’d like to see GIFed please tweet @ChasenScott or comment below.

Play of the game: An untimely own goal

Ever have one of those days where you can’t just catch a break?

You might have more in common with the KU men’s basketball team than you think.

“God, could anything more go wrong," said KU coach Bill Self, "on a day you get guys injured in warmups to basically dunking the ball for the other team.”

Not much, as it were.

Despite only scoring 20 points in the first half, the Jayhawks gutted their way back into the game against Baylor, an 80-64 loss. They pulled within two on a 3-pointer from Devonte’ Graham and did so again after a jumper by Lagerald Vick.

His next points didn’t quite go so well.

The own goal — or perhaps ‘Self-basket,' if you'd rather — was a perfect representation of KU’s inability to get over the hump. It also didn’t come by pure happenstance.

KU was in a 2-3 zone, which can create rebounding issues in of itself. The guards flew all around the court as Jake Lindsey dribbled and settled into more natural positions as he passed the ball to Mark Vital.

Vital attacked the hoop, and Udoka Azubuike moved to contest the shot. Svi Mykhailiuk probably could’ve done so just fine, especially with no Baylor players in the corner to worry about, but he slid past Vital.

Baylor’s Jo Lual-Acuil had inside position and, since Azubuike wasn’t there to block him out, had a straight shot to get the rebound. Vick had to hustle to try to get between him and the ball, but as he jumped up to get the rebound, he actually knocked it back into the hoop.

The play killed KU's momentum, preventing them from having a chance to tie the game — or take the lead — on the next possession. They pulled within two one more time, but that was as close as it got.

A trend: Hands off —

If Vick's mishap was frustrating, Azubuike's day put him on a whole other level.

The 7-foot, 280-pound big man picked up his fourth foul at the 17:54 mark in the second half of Saturday’s game. Self had plenty to say about that one — and all of them.

Let’s take a look at the first.

There’s no real way to sugarcoat this one. It’s a flop, and it isn’t a particularly good one.

Azubuike made contact with Lual-Acuil’s chest. A half-second later, the big man fell onto the floor and the charge was called..

“Hey we’ve gotten some calls, too, so I’m not saying we haven’t benefited from some whistles,” Self said with a laugh. “But that was one of the biggest flops I’ve ever seen. I mean the guy fell down a full second after supposedly there was contact.”

But Azubuike does wear some of the call — mostly because of the predictability.

“The whole deal, everybody knows that he’s going to lead with his left shoulder when he’s on the left block,” Self said. “He’s got to be smarter than that, to do that.”

Not all the fouls on Saturday were that embellished.

After defending Lual-Acuil well in the post, Azubuike was called for a foul for shoving Vital in the back.

It was a clear foul — Azubuike put both hands on Vital’s back — but it probably wouldn’t have been called if Vital had a better base and didn’t fall. It also would’ve been avoided entirely if… well... hear it from the coach:

“His second foul was a loose-ball foul. No one’s fault,” Self said. “The rebound goes through (Graham’s) hands. If (Graham) rebounds the ball, it never happens.”

Azubuike’s third foul didn’t have any such explanation. It was fairly standard, as he didn’t get into defensive position on the baseline quick enough and then had to jump forward to contest a shot by Vital, sending him to the ground in the process.

His fourth foul was the opposite. There wasn’t a loose ball, or even a live ball to go after. Really, it may have been the culmination of some frustrations earlier in the game — more on that in a second.

“The one that disappointed me,” Self said, “he just ran and ran right up a guy’s back, which was obvious. Easy call.”

Again, there was probably a little bit of an embellishment from Lual-Acuil, who was boxing out Azubuike on the play. But Azubuike didn’t do himself any favors.

He put both hands on Lual-Acuil and shoved him. The ball went in the net, but Azubuike still got tagged with the foul on what was a day full of frustration.

One that stood out: Boiling point —

Before Azubuike’s fourth foul — 12 seconds before, in fact — he was standing under the hoop and letting out some frustration.

The bugaboo that caused it? A mishap between he, Graham and Mykhailiuk that allowed a rebound to bounce right to the Bears for an easy putback.

There were a few elements to this play that caused the rebound.

But Graham never really left the area, instead stepping toward Lual-Acuil and then hanging around the basket to go after the rebound.

Had Graham ran out to the perimeter, he could’ve boxed Vital out or even potentially discouraged him from going after the rebound in the first place. Given how well Mykhailiuk executed his boxout, Azubuike would’ve snagged the board without a problem.

Instead, Graham hung by the basket. The putback went up and in. Azubuike caught the ball and snapped his head back in frustration. He set the ball back down rather than tossing it to Graham and then ran back down the court.

Oh, and a tidbit pointed out by KU basketball beat writer Matt Tait, take a look at the top of the screen at the end of the play.

Mykhailiuk was ready to run. Graham was pushing the tempo up the court throughout the entire second half. But Azubuike slowed it all down by dropping the ball in frustration. Those are the types of things that will drive not only a coach crazy, but disrupt the whole team in the process.