How the loss of Isi Holani affects KU’s defensive line 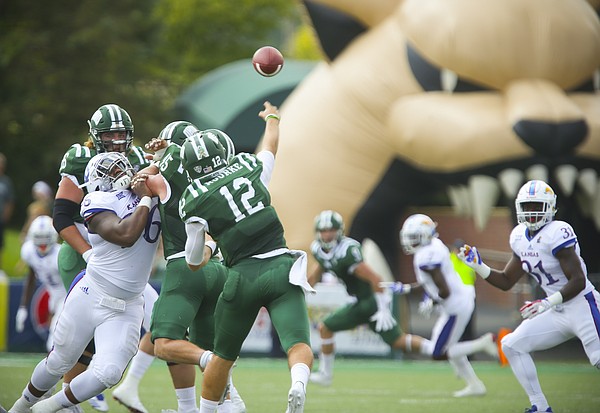 Kansas defensive tackle Daniel Wise (96) is stopped at the line as Ohio quarterback Nathan Rourke (12) throws to a receiver during the first quarter on Saturday, Sept. 16, 2017 at Peden Stadium in Athens, Ohio. by Nick Krug

The KU defense has already had its fair share of problems in 2017.

The young secondary has been exposed by a trio of MAC quarterbacks, while a pass rush featuring the preseason Big 12 defensive player of the year has been widely held in check.

Then there's the injury bug, something that hits just about every team at some point and has, for the second straight year, ended the season of a starter in KU's front seven.

"Isi Holani, unfortunately his injury is going to be a season-ending injury," said KU coach David Beaty. "He injured his knee in the game a couple weeks ago. Unfortunately he's not going to be available for the rest of the year."

Holani will get the chance to return for a redshirt senior season in 2018 and should help mitigate the void left by the potential early departures of Daniel Wise and Dorance Armstrong. But there's also the other side.

Holani, along with J.J. Holmes, impressed the coaches throughout the fall. So much so, in fact, that it helped afford KU the luxury to shift the 6-foot-3, 290-pound Wise to the outside of the line on occasion, creating a rather physically imposing defensive line configuration.

"I thought it was going to be a really big year for (Holani)," Beaty said.

But while KU won't be able to go with that specific pairing anymore, Beaty seems confident others can step up.

At his weekly press conference on Tuesday, the coach mentioned Jacky Dezir, DeeIsaac Davis and, of course, Holmes and Wise as the players that could continue to fill in on the inside.

It hasn't played out quite as well so far.

Even though the numbers haven't been pretty, the KU defensive line has had its moments. Just look at this series from Week 3.

Wise and Armstrong are the edge rushers, while Dezir and Holmes are slotted inside. As the play progresses, both Ohio's left guard and tackle focus on Holmes and the right guard tries to pull around the line and block Armstrong.

Instead, Armstrong singlehandedly blows up the play.

Even though the running back was trying to get outside on the counter, Armstrong’s quick step inside forced the right guard to try and come back and grab him. That opened up space for Joe Dineen to burst past the line of scrimmage and ultimately chase Dorian Brown down from behind.

The whole back end of the KU defense actually does a pretty solid job of staying disciplined, too. Tyrone Miller Jr., Mike Lee and Shakial Taylor are all around where Brown is taken out of bounds.

And that discipline continued into second down.

The defensive line configuration is the same here, and the play is simple enough. It’s an option, so the quarterback can hand the ball off to the running back or keep it himself if nothing opens up.

Unsurprisingly, Wise garners a ton of attention at the edge rusher spot. Two Ohio linemen come over and basically hug him to keep him from being involved in the play. Dezir and Holmes do a solid job maintaining the line of scrimmage and not getting pushed back and linebacker Osaze Ogbebor fills the remaining space up front.

Since there’s no hole for the running back, quarterback Nathan Rourke has to keep the ball. On the other side of the line, Dorance Armstrong and Joe Dineen are waiting to bring him down for a loss.

"Me and Daniel, we've been together since the start of this thing," Armstrong said. "The more comfortable you are with somebody, the more trust you have in them. And there's no doubt that I really trust Daniel."

And it doesn’t work without that trust.

The very next play, KU shifts its alignment, moving Wise to the inside of the line and swapping Dezir out for Josh Ehambe.

The Jayhawks blitz, but the Bobcats actually have more blockers (seven) than the Jayhawks do pass rushers (six).

The extra blocker on the right side of the offensive line does a decent job trying to help block Wise while forcing Ogbebor to the outside, but once he commits, Wise is left one-on-one with the right tackle, who he blows by.

In the meantime, Ehambe draws the attention of the right guard and Holmes plows his way through a double-team, setting up what happens next.

Wise is first into the backfield, forcing Rourke to step up in the pocket as he applies pressure. Holmes comes away with the sack, and even if he hadn't, Ehambe was there to finish off the play.

Simple enough... at least in theory.

Not all of the Ohio touchdowns were on the KU defensive line. The secondary was picked apart by Ohio's quarterbacks, and even when KU was able to dial up the pressure, it only took a second or two for the ball to come out.

Still, KU was in the game in the third quarter. After cutting the lead to 11, the Jayhawks had the chance to hold the Ohio defense to a field goal, but needed to come up with a stand as the Bobcats had the ball at the eight-yard line.

Holmes wasn't in on the first-down play and Holani wasn't available for the game, so Davis and Dezir were the two interior linemen. It didn't go so well.

The line did an OK job of not getting pushed back, but there was no penetration or disruption or any sort of resistance to keep Ohio’s A.J. Ouellette from running from the right hashmark at the 10-yard line to the corner of the endzone on the opposite side of the field untouched.

This play didn't fall on any one player, but if Davis was able to push his man back at all, Ouellette would've had to take a wider route and Lee would've had the chance to catch him near the line of scrimmage.

The same goes for Wise, but with the tight end having the sole job to keep him inside, it really fell on Davis to win that one-on-one matchup enough for someone else to come in and make the tackle.

In this play from the season opener against SEMO, Wise and Armstrong are the edge rushers with Holani and Holmes on the inside.

From the snap, Holani shoves the right guard deep into the backfield and actually into the path of both the running back and his lead blocker, tight end Logan Larson.

"Isi is a guy that you'd love to have there because he's a big A-gap body," Beaty said. "You like to have that big old rear-end right there in that A-gap and it's hard to move."

Because of the narrow running lane, Larson isn't able to get a solid block on Joe Dineen, and Dineen instead drives him back into the path of the running back. From there, Lee comes up to the line of scrimmage and makes the tackle.

Things worked just as smoothly on the next play.

The configuration here is a little different. Armstrong and Ehambe are the edge rushers, while Wise joins Holani on the inside.

Holani doesn't blow things up by himself, but he is able to shove the guard back a couple steps. Armstrong does his part, getting in the way in case the running back tries to bounce outside and Wise finishes the play off.

Now, it's worth pointing out the level of competition has gone up since Week 1. But KU hasn't been able to get that same level of penetration consistently against MAC opponents, and that doesn't bode well as things figure to get even tougher with the start of Big 12 play looming.

If things don't improve, it may end up costing the Jayhawks' one of their best defensive assets.

Wise's versatility filling in at different spots on the defensive line has been a wrinkle that has aided the pass run and earned him some early honors as well. Pro Football Talk named him to the Big 12 team of the week with a grade of 86.1 against Ohio.

But while Wise's speed and track background — "I've never seen a guy with his body size be able to move as fast and as quick as he does," Armstrong said — creates problems for opponents, KU may be forced to keep him inside if the defensive tackles behind Holmes can't step up.

That being said, the coaches maintained their confidence in the line throughout the week, even if, as defensive coordinator Clint Bowen said, Holani has left a big void to fill.

"It definitely does hurt. Isi was doing some really good things for us and allowed us another big body in the middle. And he was playing well," Bowen said. "The combination of him and J.J. in the middle was something that we were excited about doing and keeping Daniel on the end and having that bigger package.

"There are some other guys that just have to step up and replace those reps."

9 is the player that blows it on the AJ TD run. He bites hard and is caught behind the interior lineman when AJ bounces outside. That means that Lee needs to cover the near whole - where #9 should have been, instead of containing the outside where AJ escapes to the end zone.

This is a good X & O article that explains defensive line play. KU fans need more articles like this rather than the poison pen opinion pieces that turn the fans against KU football by creating nothing but negative comments against the team.