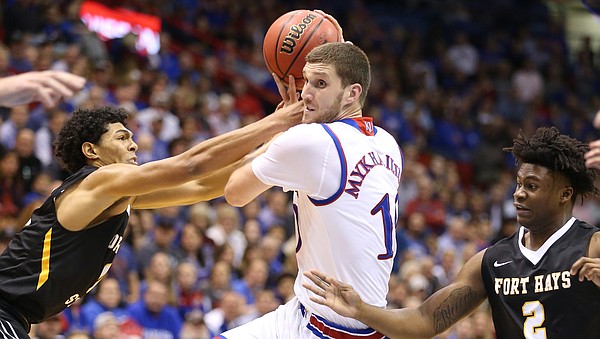 When Devonte’ Graham lobbed the ball toward Udoka Azubuike, what the crowd at Allen Fieldhouse saw made them cheer. Bill Self had a different reaction.

The play he was stewing over came two trips earlier down the floor.

The sequence that started the fast break for Kansas actually originated from a KU mistake. Svi Mykhailiuk had the ball on the left wing. It was poked away and into the hands of a defender.

As Fort Hays State dribbled the other way, Mykhailiuk took a haphazard swipe at the ball, leaving KeShawn Wilson with a one-on-one shot to the hoop.

Malik Newman, who had already picked up a foul, defended the layup well and the shot missed. The ensuing break resulted in the lob, but Mykhailiuk still found himself on the bench.

"It's not that complicated to me. If you're going to make a mistake, at least make it going full speed," Self said. "When you try not to screw up, that's when you screw up the most. We just need those guys more aggressive, playing with more reckless abandon."

That was the way the first half went more often than not for Mykhailiuk. The film didn’t do him any favors.

Early in the first half, Fort Hays State had the ball out of bounds with just seven seconds on the shot clock. The inbounds was eventually redirected to Trey O'Neil, who Mykhailiuk pressured all the way out to half court.

O'Neil turned and dribbled back to his right, easily getting by Mykhailiuk and scoring on a layup. It was far from his only defensive lapse.

Mykhailiuk was a half-step slow reacting to an off-ball cut but still recovered well enough to make a play. Billy Preston, however, didn’t make enough of a path for Svi to step through on the handoff, and Mykhailiuk didn't fight through the traffic hard enough to prevent the layup.

In a later stint on the court, Mykhailiuk found himself matched up with the Tigers' Marcus Cooper. He tried to cheat on a screen and was burned by a simple left-to-right crossover, again for a layup.

"Defensively we were bad," Self said after the game. "We've certainly got to do a better job of guarding the ball."

Offensively, it wasn’t much better.

Mykhailiuk shot just 1 for 5 in the first half, missing all three of his 3-point attempts. Even so, it was an attempted layup that stuck in Self's craw.

Nearing the midway point in the half, Mykhailiuk executed on a backcut and MItch Lightfoot delivered a perfect pass to put him in at the hoop.

Mykhailiuk went up for the layup and, perhaps sensing potential contact, contorted his body to try and lay it in left-handed. The shot bounced off the rim.

“Guy comes to contest, he flinched,” Self said. "He's a senior. That's the kind of stuff I'm talking about."

To be fair, Mykhailiuk wasn’t the only one to draw the ire of Self.

Newman, who picked up a cheap foul early in the game, did himself no favors later in the half, as he drove into heavy traffic and nearly turned it over.

The Jayhawks got the ball back and worked it around to Mykhailiuk, who launched a contested 3. At the next stoppage, both returned to the bench.

"You don't play with activity and people minus Devonte' go 3 of 21 from 3," Self said. "That is a formula to get your butt handed to you."

Perhaps it all would’ve been forgivable, though, if the swingman found other ways to contribute.

Mykhailiuk ended the game with eight rebounds and five assists, with a majority of those numbers coming in the second frame.

As for the first half, he had the chance to thread an easy entry pass to Udoka Azubuike, but his pass sailed by the big man and out of bounds.

"When you're not making shots and you don't give us any activity, there's absolutely no reason to play," Self said.

So to start the second half for the second straight game, Self went with Marcus Garrett and Preston over Mykhailiuk and Newman.

He doubled down on the move after the game, noting that Garrett made plays neither of the other two older players could make. Self did, however, make an even stronger statement.

Just over five minutes into the second half, Self turned to his bench to put in a wing. He opted for walk on Clay Young, continuing to leave Mykhailiuk and Newman on the bench for some time.

If it wasn't obvious as to why, Self made it perfectly clear after the game.

"No, I really did think, 'Now Clay, we need you to play a certain way,' " Self joked, before shedding the sarcasm for a more serious tone. "I just didn't really think that Svi or Malik deserved to be out there, to be honest with you.

"I think they got the message."

Why can't we have a football coach like Self? He doesn't demand perfection be he does demand 100% effort and he will call his players out if they don't give it. Anyways, Svi better pull it out if he wants to be drafted after the year. He showed nothing on the offensive or defensive end.

You don't think Coach Beaty has sat players for lack of effort? Wasn't that the whole story regarding Baldwin in particular. Other players have gone away for similar reasons, though there haven't been video articles about it. Oh, and Coach Self has a positive aura (deservedly) and people are working to twist anything related to Coach Beaty into something negative.

Hate to do this but the Svi Mykhailiuk experiment hasn't panned out to date.

Coming in as a freshman, he had a huge upside.

At one point he was ranked #16 in the NBA Mock Draft.

He'll have to go through the D or G league or better yet Euro league.

The NBA dream is out.

Just hope he doesn't cost us games this year.

In case you haven't noticed, teams like posting him up. They see a weak link.

Svi needs to play defense hard, take a charge early in the game, and play with an attitude. He needs to rebound, 5 or more a game, assists 4 to 5 a game, and drive to the basket, if he does that and makes 33% or more of his threes, then he will be a great player for us this year.

Same thing for Newman, we need more out of him then just his offense.

Defense of David Beatty's acumen as a power five conference, head football coach is made a mockery of by his team's performance, and their record. I have no ill-will toward the man, or the players, but if KU not only wants to compete in football in their conference, but also wants their football program to stop being a drag on their athletic department and all their athletic programs, significant changes are in order, and the head coach is only one of the things needing changed.

Also, I hope that Svi, and HCBS, can reverse the things downward spiral trend in Svi's play. It may be a litle soon to call Malik's poor play a trend.

Pretty good article, Scott. I wonder how Svi looked like a freshman in that game. This explains it all. He looked much better against TS, though. Perhaps, you can have another article what he's done right this time. Just sayin', but thanks for the analysis.