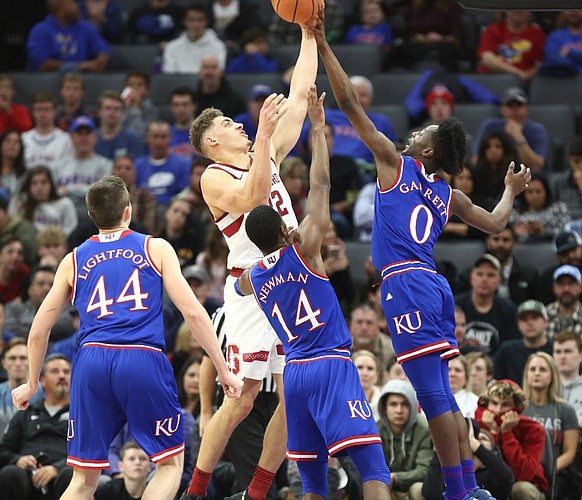 Kansas guard Marcus Garrett (0) gets a hand on a shot from Stanford forward Reid Travis (22) during the first half, Thursday, Dec. 21, 2017 at Golden 1 Center in Sacramento, California. by Nick Krug

KU’s biggest issue with Stanford wasn’t going to be "the" matchup so much as it was "a" matchup.

Most KU fans were at least familiar with big man Reid Travis before Thursday’s game, a 75-54 KU win. It wasn’t long ago — just over a calendar year, in fact — the big man posted a career-best 29 points for the Cardinal in a 15-point KU win in Allen Fieldhouse.

It wasn’t just that he scored 29 points, it was how he scored those 29.

“We didn’t do anything with him,” said KU coach Bill Self immediately following the 2016 matchup. “That was a total beat-down by him on our big guys.

Reid tallied 22 free throw attempts in the loss, knocking down 19.

Those numbers were in Self’s mind following the Jayhawks’ last game before the Stanford matchup this season, as both Self and senior Svi Mykhailiuk referenced them following a blowout win over Omaha.

That set the stage for Thursday. This time, things were different.

Rather than defend Travis straight-up and risk foul trouble to Udoka Azubuike and Mitch Lightfoot, Self attacked the big man with smaller players.

Svi Mykhailiuk drew the matchup first, defending Travis from the start of the game on.

The senior guard — listed at 6-foot-8 on the roster, though he gave a smaller number when asked about it at KU media day — was giving up some size in the matchup, with Travis outweighing him by about 40 pounds. However, Mykhailiuk more than held his own.

On the first defensive possession, Mykhailiuk denied the ball all the way out to the perimeter. He boxed out on the eventual shot attempt and KU came up with the ball.

The next possession, Mykhailiuk worked back in transition and was forced to help on a different man. After a missed Stanford layup and offensive rebound, though, the offense reset.

Mykhailiuk, who was still out of position, was late recovering to an open Travis at the 3-point line. Travis, who had made three 3-pointers in his last two games, missed what was a fairly open shot. It was arguably his best look of the half.

The only other candidate came when he had a big on him.

After a variety of action at the top of the key, Lightfoot found himself guarding Travis.

Lightfoot, KU’s most aggressive defender at the rim — arguably to a fault — had the same problem the KU bigs had last year.

Travis barely even up-faked, but Lightfoot left his feet and had to contort his body to avoid a foul. With Lightfoot out of the picture, Travis laid the ball up and in.

Travis scored six points in the first half. All six came with Lightfoot guarding him.

All-in-all, the Jayhawks primarily used multiple smaller defenders to guard the Stanford big man, which changed the way he was able to play.

The smaller KU guards were able to slide and stay in front of Travis, like a few minutes into the game, when Mykhailiuk — not known for his lateral quickness — slid into the lane and kept Travis from getting to the rim on a drive.

On another possession, Sam Cunliffe kept his footing and forced a travel. When tasked with boxing out the big on the ensuing possession, Cunliffe used his vertical leap to tip the ball away.

Other defenders had their moments too.

Just about everyone got their shot guarding the big man in the first half. With KU switching out on the perimeter, even Malik Newman ended up briefly guarding Travis.

At a significant size disadvantage, Newman fronted Travis in the post and relied on Azubuike to help had a pass come over the top.

Azubuike’s man eventually floated out behind the arc and was able to get a 3-point look, but the shot missed. KU survived the mismatch.

Late in the first half, with Newman again switched onto Travis, the big man was able to post up and the pass came in over the top.

With the KU coaches barking “help him” from the sidelines, Marcus Garrett got the message and slid into position, leaping up and knocking the ball away.

The KU guards also did their part in keeping Stanford from getting the angles to work the ball into the post, which Devonte’ Graham said after the game was a key emphasis.

And when Travis did catch the ball with a smaller defender on him, KU trapped almost immediately.

It was all part of the first-half effort that saw KU take control of the game and never look back.

The biggest problem for the Jayhawks in guarding Travis last time around was fairly simple. KU couldn’t keep him off his spot and lacked the ability to recover and wall up in the post.

After that game, Self gave Azubuike a pass, since he was just a freshman, but said he expected more from then-sophomore Carlton Bragg, redshirt-junior Dwight Coleby and redshirt-senior Landen Lucas.

That was clearly a bigger emphasis this time around, even when the ball was outside the perimeter.

Early on, most of Travis’ touches were on the outside. He caught passes at the top of the key and swung the ball to get Stanford into its offense.

Mykhailiuk, in turn, somewhat overplayed when Travis was one pass away from the action. With just over two minutes gone and Stanford with the ball on the perimeter, Mykhailiuk turned and faced Travis, extending all the way out beyond the 3-point line to deny the pass.

The plan wasn’t for Mykhailiuk to face-guard Travis for a full 40 minutes, but it did seem like denying the pass to Travis in the first place was a key focus for the KU wings.

At the very least, they showed more focus and awareness out on the perimeter than had typically been the case this season.

Just watch Marcus Garrett (No. 0) on this possession...

As for post defense — seen a little bit in the clip above — the Jayhawks primarily kept a man in front of Travis in the post, relying on help to come from the back-side.

Part of Self’s criticism in the last Stanford game had come from a lack of attention to the scouting report.

“You’ve got to play your man before he catches it,” Self said. “Our guys just played butt-behind and let him go where he wanted to go."

Mykhailiuk did have some lapses in focus throughout the game, over-helping at points in the first half and allowing Travis to post up late, but the Stanford guards didn’t always find him.

Travis’ first 2-point shot attempt didn’t come until more than six minutes into the game. Once again, it was Mykhailiuk sliding his feet to get in front of Travis and forcing him into a mid-range attempt that fell off the mark.

That possession actually carried with it all of the principles described.

Mykhailiuk got in front of Travis in the post and denied the entry. He followed him out to the perimeter and forced the miss and then even came up with the rebound, although the play was blown dead due to a Stanford technical foul.

Regardless, all of that played a role in the Jayhawks holding Travis to such a quiet outing.

The big man finished with 12 points on 5-for-12 shooting. He got to the line for only three free throws, which marked his lowest since a February 22 matchup with Oregon State the year before.

And best of all, the effort earned a thumbs up from the coach.

“I thought,” Self said, “we did a great job defensively on him."