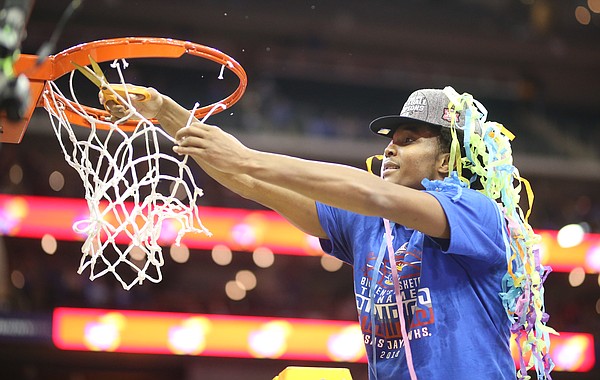 Kansas guard Devonte' Graham (4) cuts down his share of the net following the JayhawksÕ 81-70 win over the Mountaineers in the championship game of the Big 12 Tournament, Saturday, March 10, 2018 at Sprint Center in Kansas City, Mo. by Nick Krug

If anybody found it difficult to look away from the TV during the Big 12 Tournament championship game, you weren’t alone.

The Kansas basketball team’s 81-70 victory over West Virginia at Sprint Center was the most-watched Big 12 championship game in 16 seasons, according to an ESPN press release. It drew the third-highest ratings on ESPN’s networks during conference tournament week, producing a 24 percent rating increase from last year’s Big 12 Tournament title game.

The Big 12 title game delivered 2.85 million viewers, according to Nielsen. The game even outdrew Duke-North Carolina’s matchup in the ACC Tournament semifinals (2.82 million).

Of course, it’s no surprise that the Jayhawks can draw a big crowd. Among ESPN’s college basketball games, Kansas City ranked as the No. 2 market throughout the season with a 2.6 rating, slightly ahead of the Raleigh-Durham market (2.3 rating). Louisville remained the top local market for college hoops for the 16th straight year with a 4.2 rating.

During the conference tournament week, the most watched game on ESPN platforms was the ACC championship game (UNC vs. Virginia, 3.435 million viewers).

Who says we aren't a good draw for TV?