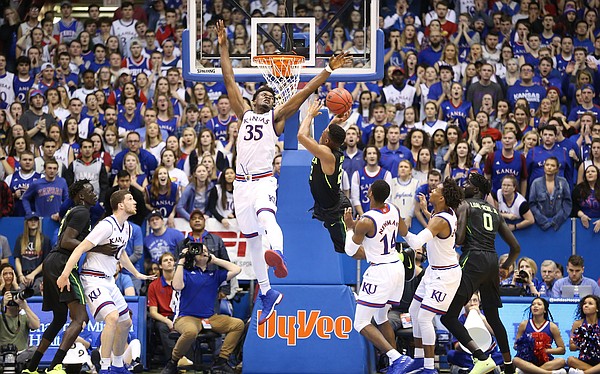 After back-to-back wins against Oklahoma State and Iowa State, Baylor will turn its attention to Kansas on Saturday as the Bears search for potential paths to the NCAA Tournament.

The Bears (14-10, 4-7 in Big 12) have lost eight games against ranked opponents entering Saturday’s 1 p.m. matchup against KU at the Ferrell Center (TV: CBS). They only have two wins versus teams ranked in KenPom’s Top 50, tied for the fewest among Big 12 teams.

"The good thing in the Big 12 is there's a lot of signature-win opportunities,” Baylor coach Scott Drew said. “There's not a bad loss out there.”

The Bears are ranked No. 40 by KenPom, seventh in the Big 12. They lost, 70-67, in their first game against Kansas on Jan. 20. Leading scorer Manu Lecomte was limited to 10 points but Baylor couldn’t hold onto a six-point lead with three minutes remaining.

​"Second time, you're always looking at what was effective and trying to get more of that," Drew said. "And then the areas you needed to improve in and areas you needed to adjust, hopefully you make those adjustments now. They'll do the same. At the beginning of the game, you'll see what they adjusted to, what we adjusted to, and then it goes from there."

Fun fact: Baylor is 10-0 when leading at halftime, but the Bears have only led at half in one of their last 12 games.

Series history: Kansas leads 30-4. The Jayhawks have won 11 straight games. The last five have all been decided by six points or less. 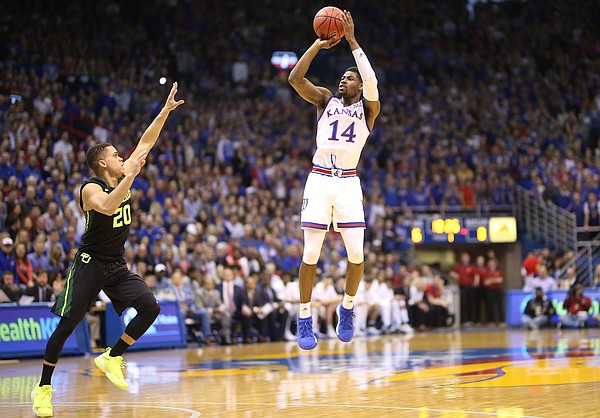 Ranking fourth in the Big 12 in scoring, Lecomte is averaging 16.8 points on 39 percent shooting from the 3-point arc and an 89 percent mark at the free-throw line. He made seven 3-pointers in a two-point loss to Oklahoma on Jan. 30.

The fifth-year senior has only attempted 27 of his 282 shot attempts at the rim, according to hoop-math.com. Lecomte (pronounced: MAHN-ew la-CONN-t), playing 33 minutes per game, owns a 1.65 assist-to-turnover ratio.

Against KU this season: Scored 10 points on 3-for-12 shooting with three assists and three turnovers in 37 minutes. 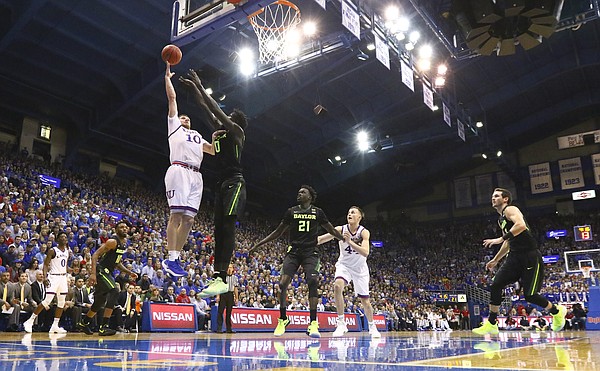 Against KU this season: In 32 minutes, he had 14 points and 10 rebounds with two assists before fouling out. 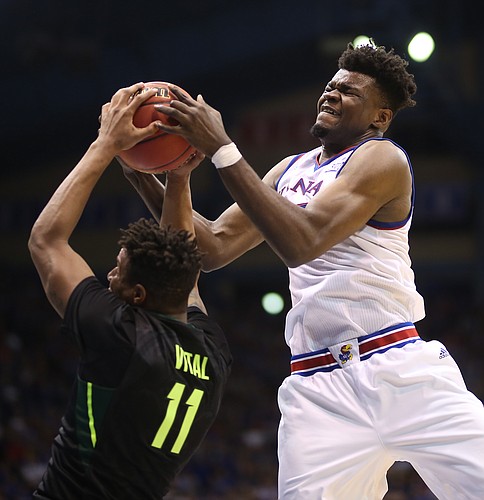 Kansas center Udoka Azubuike (35) fights for a rebound with Baylor forward Mark Vital (11) during the second half, Saturday, Jan. 20, 2018 at Allen Fieldhouse. by Nick Krug

Known for his high-flying dunks, Vital is averaging 7.3 points and 6.1 rebounds in Big 12 play. He’s started in the last nine games, ranking second on the team with 21 steals and third with 14 blocked shots. He’s a 50 percent free-throw shooter, opting to take a team-high 48.5 percent of his shots at the rim, according to hoop-math.com.

Against KU this season: Finished with nine points and nine rebounds in 27 minutes, turning the ball over twice.

Maston is shooting 50 percent from the field in Baylor’s last five games, averaging 11.4 points. Featuring a 7-foot wingspan, he ranks second on the team with 5.9 rebounds per game. He missed six games earlier this season with a broken right hand. He’s the nephew of former Texas Tech standout Tony Battie.

Against KU this season: Only played four minutes off of the bench, totaling two points, one rebound and one steal. 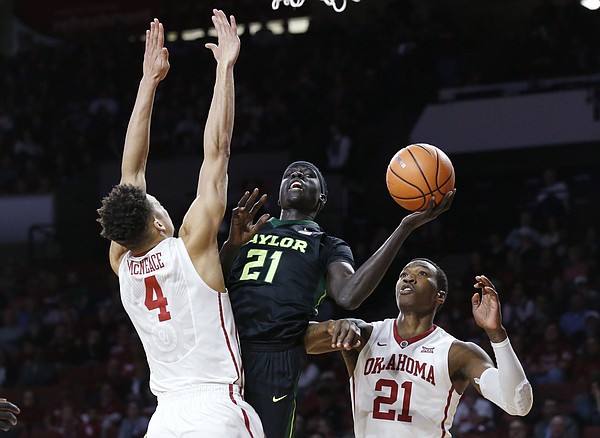 Baylor forward Nuni Omot (21) drives to the basket between Oklahoma center Jamuni McNeace (4) and forward Kristian Doolittle (21) during the first half of an NCAA college basketball game in Norman, Okla., Tuesday, Jan. 30, 2018.

In the last five games, Omot (pronounced: NOO-nee OH-maht) is averaging 14 points in 26.4 minutes. In those games, he’s connected on 42 percent of his shots from behind the 3-point arc. He was on the junior-varsity basketball team in his junior year of high school, growing six inches in the summer before his senior year. He started his college career at Division II Concordia University in St. Paul, Minn.

Against KU this season: Tied for a team-high 14 points, making 3 of his 4 shot attempts and all seven free-throw attempts. Added two rebounds and a steal.

With a mix of its size and zone defense, Baylor leads the conference in field goal percentage defense since the start of Big 12 play. Opposing teams are only shooting 42 percent, while the Bears boast the best rebounding margin in the conference (plus-3.8).

Throughout Big 12 play, the Bears have struggled with turnovers. In the last five games, Baylor has been outscored 96-67 in points off turnovers. The Bears are having trouble with preventing their own turnovers (15 in the first meeting vs. KU) and taking advantage with opposing teams give the ball away.

Along with the early signees, the Bears plan to add Makai Mason, from Yale (16 points per game in 2015-16), alongside Mississippi State transfer Mario Kegler, who played in high school with Malik Newman.

Kansas by 1.5. I think KU will play it’s two-big lineup a little more than usual, which will make a big difference on the glass. Perhaps the biggest concern will be slowing down Manu Lecomte, especially after the Jayhawks played such strong defense against him in the first meeting.

The players change, the coaches change but the one constant in Baylor basketball is underperforming.