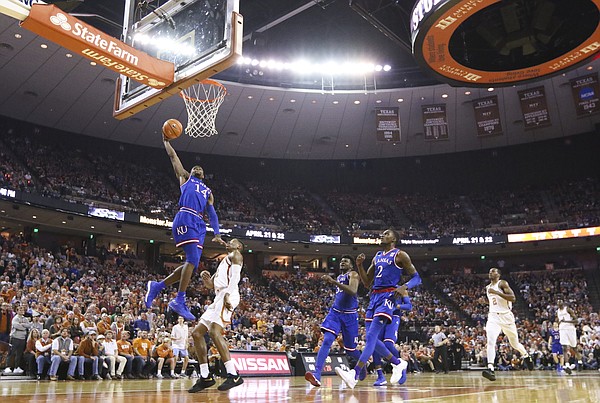 Kansas guard Malik Newman (14) soars in for a dunk against Texas guard Kerwin Roach II (12) during the second half on Friday, Dec. 29, 2017 at Frank Erwin Center in Austin, Texas. by Nick Krug

Firmly on the bubble with Selection Sunday rapidly approaching, Texas is desperate for signature wins in the final weeks of the regular season.

On the other side, Kansas will try to maintain its spot as a potential one seed and win the Big 12 title outright when the two schools meet at 8 p.m. Monday (TV: ESPN) at Allen Fieldhouse in the Jayhawks’ last home game of the season.

The Longhorns (17-12, 7-9 in Big 12) have won two of their last three games but they could be shorthanded against KU. Starting guard Eric Davis Jr. was sidelined in Saturday’s win over Oklahoma State after he was named in a Yahoo Sports report. The school is investigating whether he received an improper $1,500 payment from a sports agency.

Plus, Mo Bamba was forced to sit out the second half against Oklahoma State because of a sprained left toe.

“It wasn’t a hard decision,” Texas coach Shaka Smart told the Austin American-Statesman of sitting Bamba. “You could tell by the look on his face he didn’t have it. We’ll have to evaluate him moving forward.”

Fun fact: Texas sophomore guard Andrew Jones was diagnosed with leukemia in early January. A fund to support Jones and his family has raised more than $180,000. “I’ve been in a great place lately these last couple of weeks,” Jones said in his first interview since his diagnosis on the Lone Star Sports Network. “I’m going to be back soon.”

Series history: Kansas leads 30-8. The Jayhawks have won the last eight meetings with their last loss in 2014. 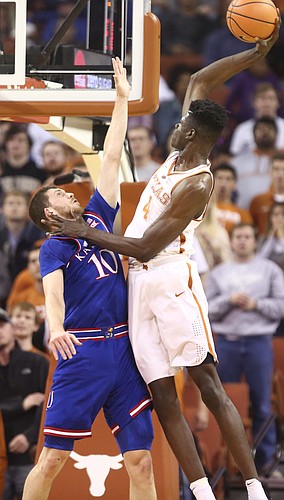 Texas forward Mohamed Bamba (4) pulls back for an attempted dunk over Kansas guard Sviatoslav Mykhailiuk (10) during the first half on Friday, Dec. 29, 2017 at Frank Erwin Center in Austin, Texas. by Nick Krug

Bamba ranks second nationally with 107 blocks and in the top 15 with 10.6 rebounds per game. During Big 12 play, the McDonald’s All-American from Harlem is averaging 13.7 points, 10.9 rebounds and 3.5 blocks per game. He’s shooting 54.5 percent from the field and 67.7 percent at the free-throw line.

Featuring a ridiculous 7-foot-9 wingspan, Bamba has recorded nine double-doubles in conference play. He leads the Big 12 in rebounding with 23 more boards than any other play in 16 conference games. He’s connected on 31 percent of his 3-point attempts.

Against KU this season: Nearly recorded a triple-double with 22 points, 15 rebounds and 8 blocks in 34 minutes, shooting 9 of 16 from the field. 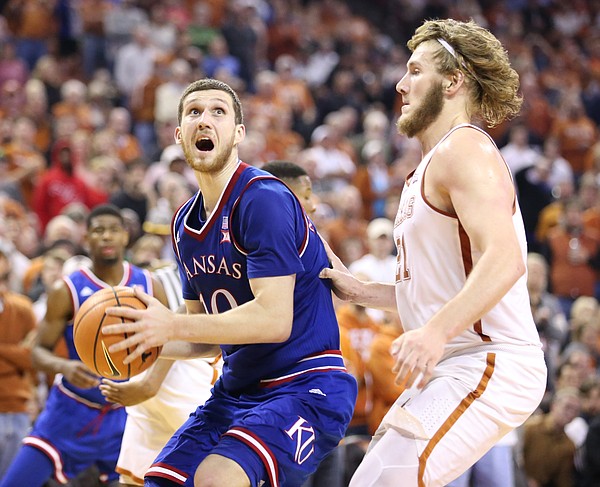 Kansas guard Sviatoslav Mykhailiuk (10) heads to the bucket against Texas forward Dylan Osetkowski (21) during the second half on Friday, Dec. 29, 2017 at Frank Erwin Center in Austin, Texas. by Nick Krug

Playing more than 37 minutes per game in conference play, Osetkowski has a valuable role on both ends of the court. He’s averaging 12.9 points and 6.8 rebounds, leading the Longhorns with 65 free throw attempts once Big 12 play began. Osetkowski (pronounced: oh-set-COW-skee) sat out all of last season after transferring from Tulane.

Against KU this season: Finished with 17 points (7-for-15 shooting) and eight rebounds in 39 minutes. 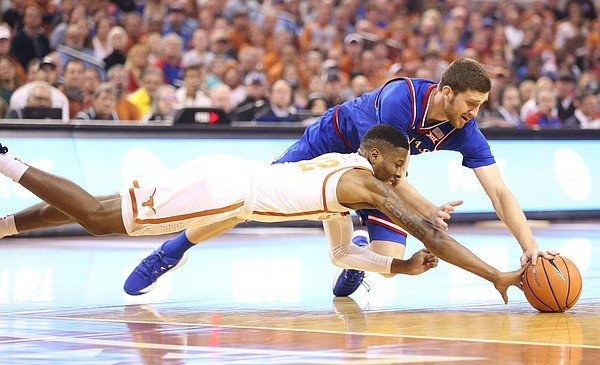 Kansas guard Sviatoslav Mykhailiuk (10) and Texas guard Kerwin Roach II (12) compete for a loose ball during the first half on Friday, Dec. 29, 2017 at Frank Erwin Center in Austin, Texas. by Nick Krug

An excellent athlete and two-time Texas state champion in the triple jump during high school, Roach is averaging 12.1 points in Big 12 play with a team-high 21 steals. A strong perimeter defender, he’s shooting 36.1 percent from 3 and ranks second on the team with 49 assists against conference opponents.

Against KU this season: In 38 minutes, he recorded 13 points, seven rebounds and four assists while shooting 5 of 10 from the floor. 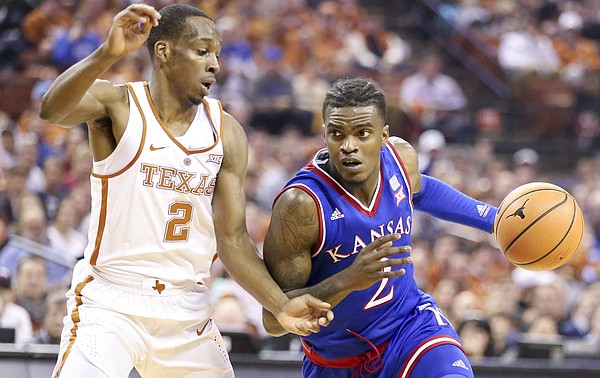 A point guard from Oak Hill Academy, Coleman is averaging 10.6 points and 4.4 assists against Big 12 teams. He’s struggled to find his shooting stroke, making 22.7 percent of his attempts from the 3-point line. According to hoop-math.com, Coleman only attempts 25 percent of his shots at the rim.

Against KU this season: Shooting 7 of 14, he had 17 points, six rebounds, five assists and three turnovers in 38 minutes. 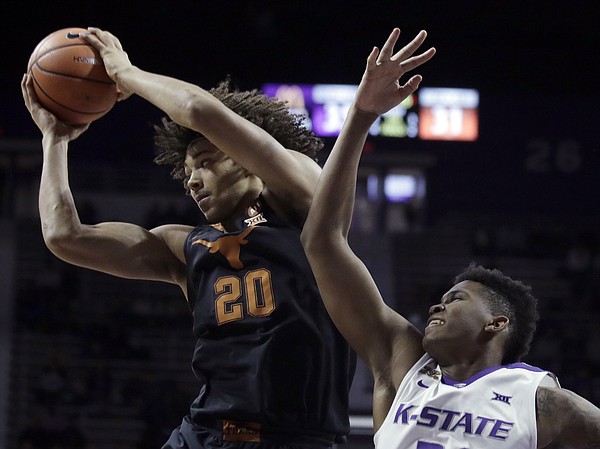 Averaging 17 minutes off of the bench in Big 12 play, Sims has made 62.5 percent of his shots on his way to 4.6 points and 3.1 rebounds per game. From Minneapolis, he had two brothers play college basketball, including one at Kansas State. He struggles at the free-throw line, making 13 of his 32 attempts.

Against KU this season: Off the bench, Sims grabbed one rebound in five minutes without attempting a shot.

ONE THING TEXAS DOES WELL

With Bamba protecting the paint, the Longhorns have one of the toughest defenses in the country. According to hoop-math.com, Texas is holding opposing teams to 46.1 percent shooting when they aren’t in transition. That ranks second in the Big 12 only behind Texas Tech’s mark of 45.6 percent.

The lowest-scoring offense in the Big 12, the Longhorns have problems shooting (42.2 percent, last in conference) and that extends to the free-throw line (69.3 percent) and 3-point arc (32.8 percent). The Longhorns have shot 37 percent or worse in five Big 12 games, all resulting in losses.

Kansas by 9. The Longhorns should play like a team desperately trying to earn a spot in the NCAA Tournament, but it doesn’t help that they are expected to be shorthanded without Eric Davis Jr. and potentially Mo Bamba. I’m going to assume Bamba will try to play through his toe injury but I expect him to be limited. In a festive atmosphere, with the chance to celebrate an outright Big 12 title and honor seniors, I think the Jayhawks will start fast and cruise to a big win.

I think the Jayhawks will start fast and cruise to a big win.

I just don't see it that way through my neurotic, KU basketball fan lens. I'm just sitting here wringing my hands and hoping we can get those Seniors off of the court early so we can send them out right in preparation for Season #2 and #3. Please! I need a therapist! Oh, yea, I am one. That's not good.

If Bamba is limited then I can see us winning by double digits and get our newbies some court time.

I'd like to see Vick get his mojo back.