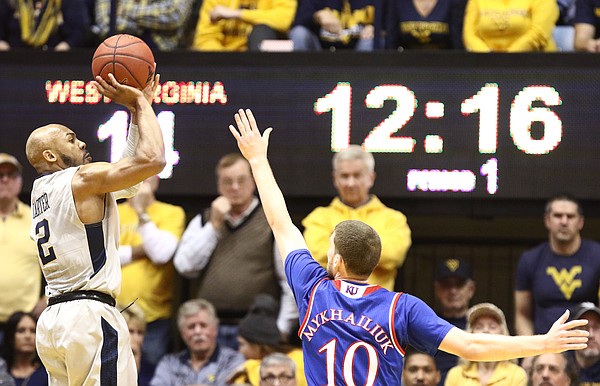 West Virginia guard Jevon Carter (2) puts up a shot against Kansas guard Sviatoslav Mykhailiuk (10) during the first half, Monday, Jan. 15, 2018 at WVU Coliseum in Morgantown, West Virginia. by Nick Krug

After a three-game losing streak at the end of January, West Virginia is starting to look like one of the top teams in the Big 12 again with wins in three of its last four games.

Next up is a challenge that the Mountaineers have never accomplished: a win inside of Allen Fieldhouse. With ESPN’s College GameDay in Lawrence, 20th-ranked West Virginia will face No. 13 Kansas at 5:15 p.m. Saturday (TV: ESPN).

The Mountaineers (19-7, 8-5 Big 12) sit in third place in the conference standings, two games behind leader Texas Tech. They picked up a 16-point home win over TCU earlier this week.

In the latest KenPom rankings, Kansas is No. 13 and West Virginia follows at No. 14.

Fun fact: Under coach Bob Huggins, the Moutaineers have a 195-31 record when holding opponents to 69 points or less. They won 74 of their last 76 games when opposing teams don’t reach 70 points.

Series history: Kansas leads 8-4. The Jayhawks have a 5-0 record vs. the Mountaineers at Allen Fieldhouse. 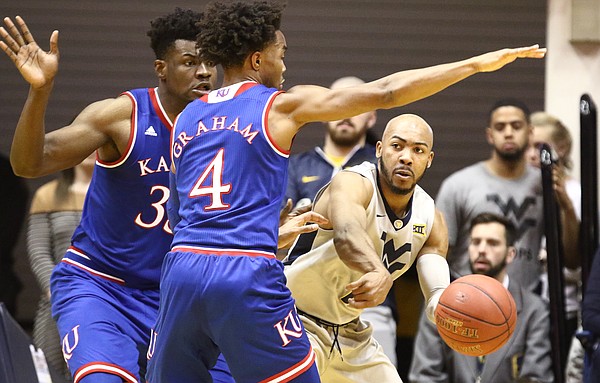 Leading the nation with 81 steals this season, Carter continues to bother opposing guards with his tight defense. In Big 12 play, he’s averaging 15.1 points on 31.8 percent shooting from the 3-point arc while dishing 7.2 assists per game.

From Maywood, Ill., he’s only scored more than 10 points in one of his last four games, struggling to find his 3-point stroke. Even without scoring, he’s second on the team with 4.5 rebounds in conference play. Defensively, he’s snagged a steal in 16 straight games. 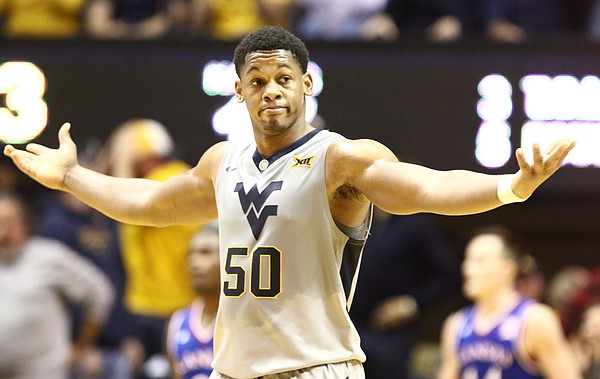 West Virginia forward Sagaba Konate (50) receives the applause of the crowd following a block against Kansas during the first half, Monday, Jan. 15, 2018 at WVU Coliseum in Morgantown, West Virginia. by Nick Krug

One of the most improved big men across the country, Konate has blocked 40 shots against conference opponents, ranking second in the Big 12. West Virginia’s most efficient inside scorer (converts on 72.2 percent of his shots at the rim, according to hoop-math.com), Konate (Kuh-NUH-teh) is averaging 12.2 points and 9.2 rebounds in Big 12 action.

Against KU this season: Blocked five shots and recorded a double-double with 16 points and 10 rebounds in 33 minutes. 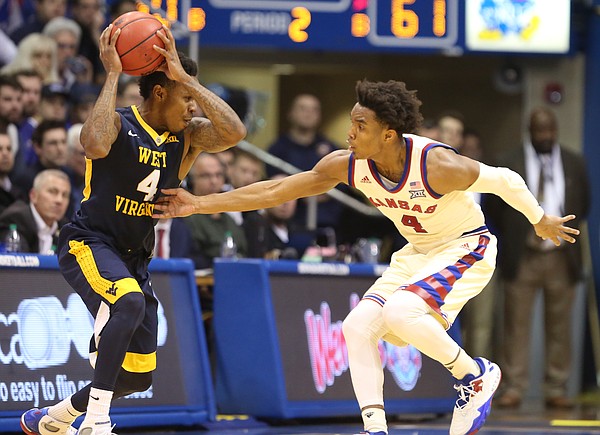 A strong slasher, Miles has struggled from behind the 3-point arc throughout the season. He’s only shooting 25.6 percent from 3 in Big 12 play, averaging 9.3 points. Usually a big piece of Press Virginia, he’s recorded a total of six steals in his last 10 games.

Against KU this season: Only shot 4 of 11 from the field on his way to nine points, adding four rebounds, four assists and two turnovers. 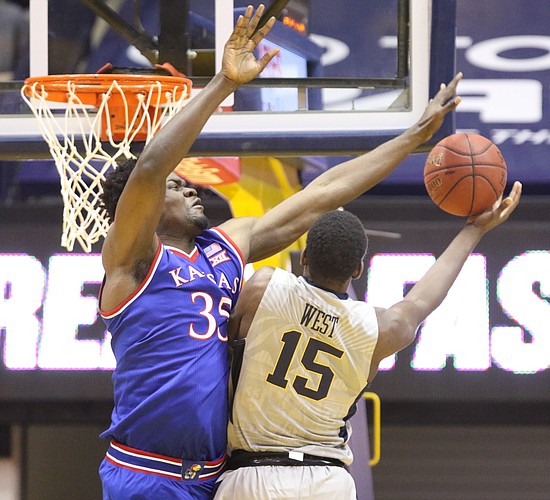 Kansas center Udoka Azubuike (35) defends against a shot from West Virginia forward Lamont West (15) during the first half, Monday, Jan. 15, 2018 at WVU Coliseum in Morgantown, West Virginia. by Nick Krug

Becoming a more consistent shooter in recent games, West is averaging 9.7 points and 3.2 rebounds against Big 12 opponents. He’s shooting 39.1 percent from the 3-point arc, which ranks second on the team. He’s a strong offensive rebounder, but only takes 20 percent of his shots at the rim according to hoop-math.com.

Against KU this season: Scored seven points shooting 1 of 7 from the 3-point line to go along with six rebounds and a block. 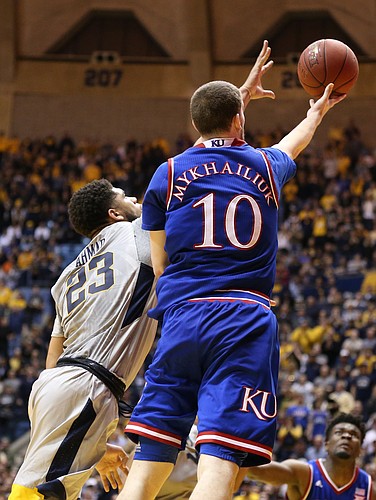 Kansas guard Sviatoslav Mykhailiuk (10) scoops in a bucket past West Virginia forward Esa Ahmad (23) during the second half, Monday, Jan. 15, 2018 at WVU Coliseum in Morgantown, West Virginia. by Nick Krug

Since returning from an NCAA suspension, Ahmad has been inconsistent in conference play. He’s recorded 15 or more points in four games and three points or less in three games. He still ranks third in scoring with 11.0 points against conference opponents. The Cleveland native has added 4.3 rebounds each night.

Against KU this season: In 28 minutes off of the bench, he had 16 points, five rebounds, five turnovers and two steals.

Beyond forcing turnovers, West Virginia ranks second in the Big 12 with a plus-3.4 rebounding margin (only behind Baylor’s plus-4.3). The Moutaineers have either matched or outscored opponents in second-chance points in 10 of their 13 conference games.

It’s a product of Press Virginia, but the Moutaineers commit a lot of fouls and send opposing teams to the free-throw line often. In Big 12 play, opponents are averaging nearly 24 attempts per game. Opponents have shot more free throws in nine of the team’s last 10 games.

The Mountaineers signed four players in the November signing period and have a class than ranks 59th by Rivals. West Virginia will add 6-foot-10 forwards Derek Culver and Andrew Gordon, along with 6-foot guard Jordan McCabe and 6-foot-3 guard Trey Doomes.

Culver, who was originally signed to the ’17 class, plays at Brewster Academy in New Hampshire. He was a four-star prospect out of high school. Doomes and McCabe are both ranked near the end of the Rivals Top 150.

Kansas by 3.5. Outside of KU’s offensive problems against Baylor, no Big 12 team has forced Kansas to play as poorly in a half as West Virginia in Morgantown. Of course, the Mountaineers couldn’t sustain the momentum and eventually lost by 5. The difference now is their offensive is performing at a higher level than the start of conference play. I think Esa Ahmad has a big game.