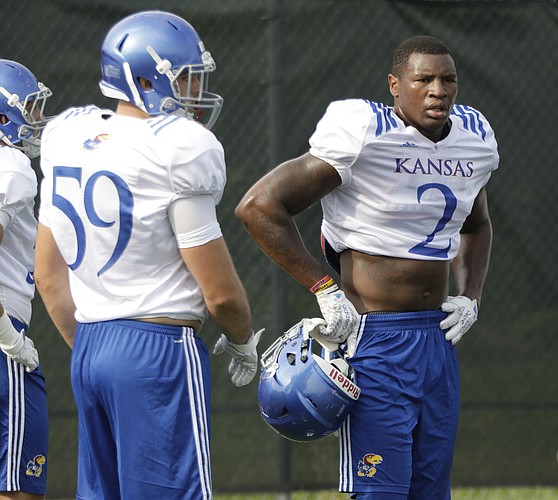 When the Kansas football team kicks off the 2017 season against SEMO on Saturday night, Kansas junior defensive end Dorance Armstrong Jr. will have plenty of attention on him.

That comes with the territory of being named the Big 12’s preseason defensive player of the year. But beyond the fans, Armstrong has intrigued NFL scouts and is projected as a potential first round pick.

In Sports Illustrated’s 2018 mock draft, created by Chris Burke, Armstrong is slotted as the 23rd pick in the first round, which would send him hypothetically to the Buffalo Bills. Armstrong is eligible for the 2018 draft next spring if he chooses to forgo his senior season.

“Kansas is a combined 2–22 over Armstrong’s first two seasons, so you’re forgiven if you have not seen him play,” Burke wrote. “Make a point to do so this year. He can be a solo wrecking crew in attack mode, with the speed to go sideline to sideline.”

In April’s draft, the only first-rounder among Big 12 players was former Texas Tech quarterback Patrick Mahomes. Only five players were picked in the first three rounds, well below the players picked among other Power Five conferences.

Bleacher Report’s draft analyst Matt Miller loves what he’s seen on tape of Armstrong. He called KU’s star defensive end, “one of my favorite athletes in the entire class. The dude is long-armed, extremely quick and has the moves to beat tackles off the edge.”

ESPN draft analyst Mel Kiper ranked Armstrong third among underclassmen defensive ends, but just outside of his preseason Big Board of Top 25 prospects. Of course, things will change and new players will emerge once the season progresses, but it shows the amount of respect that Armstrong is receiving from scouts.

When Armstrong is asked about his draft stock and playing in the NFL, he brushes it off and emphasizes his only focus is the upcoming season.

"I'm not really thinking about that right now," Armstrong said in the spring. "I want to actually experience what winning in college feels like. That’s where I’m looking right now.”

From the people who watch Armstrong in practice and film sessions each day, they know he’s telling the truth when he says he’s not worried about next year’s NFL draft.

“Dorance, he’s not an ego guy, he’s not a this-is-about-me guy,” KU defensive coordinator Clint Bowen said. “He truly has embraced trying to master his trade. He has a very level head on his shoulders.”

Aqib Talib, who will be inducted into the school’s Ring of Honor on Saturday, was the last KU football player to be picked in the first round of an NFL Draft — back in 2008.