Malik Newman making the most of his transfer season 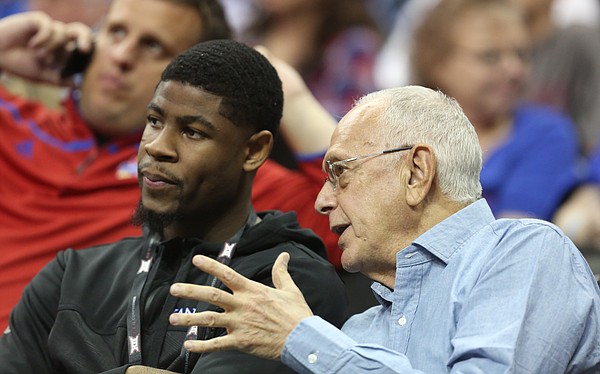 Malik Newman can’t suit up for the Kansas basketball team this season, but that doesn’t mean he hasn’t made an impact elsewhere.

The 6-foot-3, 190-pound Newman, who is sitting out the season because of NCAA transfer rules, has played well on the scout team in practices. That's given confidence to his teammates and coaches that he will be ready for a big role next year.

In his one season at Mississippi State, Newman averaged 11.3 points per game. He was a 38 percent shooter from the 3-point line and made free throws at a 69 percent clip.

“He’s a terrific talent,” KU coach Bill Self said on his Hawk Talk radio show earlier this week. “He's had a really good year. I think that the transfer year has helped him from a strength standpoint and certainly from a physical standpoint. I do believe that it’d be hard to keep him out of the starting lineup next year, regardless of who’s back.”

The Jayhawks could feature a vastly differently lineup next season if juniors Devonte’ Graham and Svi Mykhailiuk decide to enter the NBA draft. National player of the year Frank Mason III will graduate.

Along with Newman in the backcourt, the Jayhawks will add Arizona State transfer Sam Cunliffe — he’s eligible to play after the end of the first semester — and incoming freshman guard Marcus Garrett.

Newman will likely make his unofficial KU debut when the Jayhawks travel to Italy in the summer on their latest trip abroad.

Before then, Self would like to add a point guard who can complement Newman’s strengths. Newman only averaged 2.2 assists per game at Mississippi State.

“I don’t really see Malik as a point guard,” Self said. “I see him as a combo guard that can maybe play a little bit of point. But he needs to have a free mind to go score. That’s what he does. That’s naturally what he does. We’ve got to, hopefully, sign another guard so we can even take more advantage of that.”

Throughout his season of sitting out, Newman — the eighth-ranked player in the Class of 2015 by Rivals — has helped the Jayhawks in practice on the “Red” team, which serves as the scout team for the starters.

Self noted that the “Red” team, which features reserves Mitch Lightfoot, Dwight Coleby, the team’s walk-ons and Cunliffe, have lost big in some scrimmage settings but are capable of some surprise wins.

"I think if Malik was eligible now," Self said, "he'd be playing a ton.... There’s no question that Malik’s had a good year."

He has some big shoes to fill, especially if Svi and Graham leave too.

Could be wrong, of course, but I don't see the NBA drafting those two. They're talented and would be given an opportunity (Perry Ellis). They also might leave if they've stop going to class and have mentally "checked that college box" and want to move-on. I would think Matt and Bobby would have a better feel for that aspect.

It might also depend on where they are with their degrees. Pro ball is the bigger goal, but it is absolutely true that they likely need to think about making a living outside of BB more so than others. Svi could easily pull a Sasha without any problem. This next month could determine a lot.

Trevon Duval is the big PG recruit that is left on the board, but it sounds like he is leaning to Duke - who really needs a PG, though you gotta wonder who will be coming back for them. 3 top recruits does not a team make.

It also makes you wonder what rabbit Coach will find graduating from another school, suddenly deciding to come to the US, or ...

The Georgetown kids' de-commit might get us back into the elite PG sweepstakes.

Also love the picture. What better year could you have than sitting next to one of the best BB minds ever and getting 1-1 in game tutoring. It doesn't get any better than that.

I can't envision Svi being drafted by the NBA at this time. Of course, he could go to the tryouts and test the waters. My bet is that, if he leaves, it will be to play in Europe. I may be wrong (and I hope I am), but his body language doesn't seem to represent someone who plans to come back.

I think that Devonte will put his name in the hat for the draft but not hire an agent right away so that he has the option to return to KU for his senior year if that seems to be his best pathway.

I believe that Coach Self probably already has a good idea as to whether KU is in the hunt for Duval. Therefore, I suspect that he has a number of "feelers" out for another alternative.

Lastly, "one and dones" are kind of a crap shoot, especially this time of the year. Many are already in the mental stage of what comes next. Hopefully, Josh will be the exception and continue to give 110% on the court and straighten up his priorities off the court.

Duvall narrowed his list to 4 a while ago and we aren't one of them.

I hadn't heard about the Gtown pg commit. I had read that things were rocky for the son of a legend.