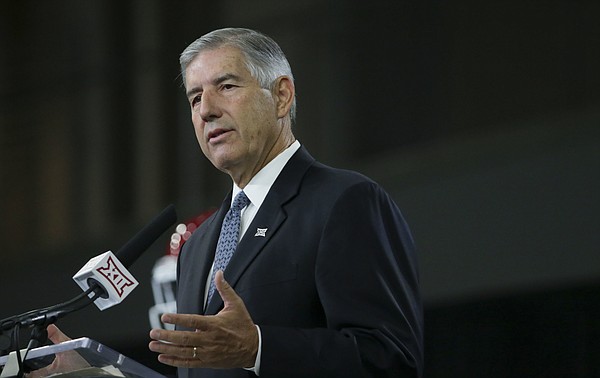 Frisco, Texas — Big 12 commissioner Bob Bowlsby was happy to see the NCAA adopt a December signing period for football teams, but wants it to go a step further.

During the spring, the NCAA approved an early football signing period for high school recruits in December, which will run for 72 hours from Dec. 20-22. Those dates coincide with first three days of the midyear JUCO signing period.

For players who don't utilize the early signing period, the usual National Signing Day will remain on the first Wednesday in February, which will land on Feb. 7 for Class of 2018 recruits.

“I would suggest that we still have a lot of work to do there,” Bowlsby said at Big 12 Media Days at Ford Center. “We have data that indicates that about 70 percent of the Division I football prospects make their decision before the 1st of October and really would like to get the recruitment process over with.”

Instead of a formal signing day, Bowlsby mentioned recruiting windows, which he suggested teams could issue letters of intent and players have 14 days to sign it.

One of the statistics that Bowlsby cited was the average FBS team issues 233 oral offers to players, though only 25 players can sign per recruiting class.

“I'm not sure that a signing date is exactly what we need in today's environment,” Bowlsby said. “I have asked coaches, athletic directors, conference commissioners repeatedly over the last 12 months why we have a signing date…. The only answer I've ever gotten is because we've always had a signing date.”

Of course, there’s always potential pitfalls with an earlier recruiting window, which include coaching changes and cause-and-effect problems.

But Bowlsby said his main motivation for a new signing period system is a more genuine recruiting process.

“There's a lot of disingenuousness in the system, and I think we need to try to clean that up as much as we possibly can,” Bowlsby said. “It seems to me that maybe a signing window might be the answer to it, but we have a lot more work to do on it, and I wouldn't presume to say how it's going to turn out at this point.”

TCU coach Gary Patterson said it would be difficult to move signing dates to the beginning of the football season because coaches would have limited time for evaluations, along with time to work on their current team.

"All the mistakes that everybody's talking about right now with players, kids want to decommit, well, a lot of it is because they get talked into going to a place they don't know anything about," Patterson said. "They just read the name, and they really don't fit in. We've got to get back to kids going to our campus and see if they like the coaches, see if they like everything."

I'd like to see National Signing Day moved out of February and into April after the Final Four. I don't like college football intruding on college basketball season.