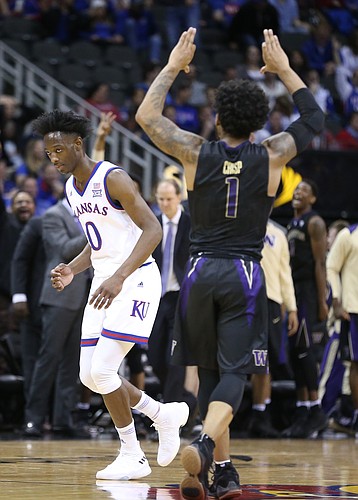 Washington guard David Crisp (1) raises up his arms after hitting a late three pointer against Kansas guard Marcus Garrett (0) during the second half, Wednesday, Dec. 6, 2017 at Sprint Center. by Nick Krug

The price of 13 consecutive Big 12 titles and a lofty national ranking is that Kansas will almost always be circled on the calendar by opponents.

Look no further than Wednesday’s 74-65 loss against Washington in Kansas City, Mo., where the Huskies tried to make a statement with their play on both sides of the court. After the final horn sounded, the Huskies met in the middle of the court to celebrate. That celebration continued after the handshake line with David Crisp and Noah Dickerson screaming in joy into an ESPN camera. They could even be heard through the walls of their locker room.

After scoring 10 points, Crisp mentioned how locked in they were during practices leading into the game.

Similar to other blue bloods, there’s something much different, and memorable, about beating the Jayhawks.

When TCU topped Kansas last year in the first round of the Big 12 Tournament — Josh Jackson sat because of a suspension — it served as a turning point for the Horned Frogs. Their bid for the NCAA Tournament fell short, but they went on to win the NIT.

“It definitely put us on the map,” TCU guard Kenrich Williams said at Big 12 media day in October. “I remember just going back to school and everybody congratulating us about beating Kansas.”

The Horned Frogs, who are ranked No. 20 in the nation with a 10-0 record, have continued to use that game as motivation that they can beat anybody. As far as ranking his favorite wins, Williams said the win over KU was “kind of close, actually” to the NIT championship.

ISU players remember that they were trailing for the majority of the game until they heated up from the 3-point line in the second half. Then there was the added satisfaction of winning on KU’s home court.

“It got silent and everybody was covering their face up and stuff like that,” Iowa State guard Donovan Jackson said. “It was just a cool moment. … The thing I remember is just everyone’s faces in the stands being shocked.”

Jackson said it was “definitely” his favorite regular season win. He saw it as a chance to prove himself, scoring 10 points off of the bench.

“It kind of boosted my confidence,” Jackson said. “I’m a pretty confident guy. It just gave me some reassurance that I do belong out there.”

The Mountaineers split their season series vs. KU last year, earning a win in Morgantown and losing in overtime at Allen Fieldhouse.

“It’s just a regular game,” Carter said. “It’s not like we beat them in no championship. It’s just another win.”

If we wanna will we need to play pressure defense, and block shots, beg

If we wanna will we need to play pressure defense, and block shots, because 3s don't matter if opponents do what Washington does.