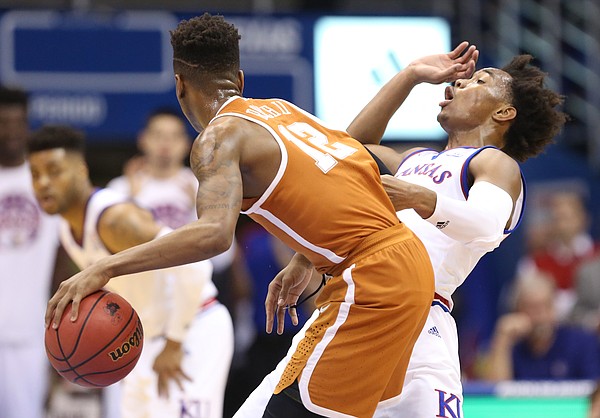 Kansas guard Devonte' Graham (4) gets backed up by Texas guard Kerwin Roach Jr. (12) during the first half, Saturday, Jan. 21, 2017 at Allen Fieldhouse. by Nick Krug

About two months following the start of the college basketball season, conference play has finally arrived in the Big 12. The Kansas Jayhawks’ road to a 14th-straight conference title begins on the road Friday night against Texas (8 p.m., ESPN2) at the Frank Erwin Center.

The Longhorns (9-3) have won five of their last six games, suffering losses this season to Duke, Gonzaga and Michigan. Their formula this season is dominant defense and scoring inside of the paint.

Andrew Jones, who missed the last four games with a right wrist fracture, is a game-time decision according to Jon Rothstein of Fan Rag Sports. Jones, a sophomore who nearly left for the NBA Draft last spring, is averaging a team-high 15.3 points through eight games while shooting 43 percent from the 3-point line.

In the preseason Big 12 coaches poll, Texas was picked to finish fourth. The Longhorns are unranked in the latest AP poll, but fifth among teams receiving votes outside of the Top 25.

Kansas has won 26 straight conference openers dating back to the 1991-92 season.

Series history: Kansas leads 29-8. The Jayhawks have won the last seven meetings with their last loss in 2014. 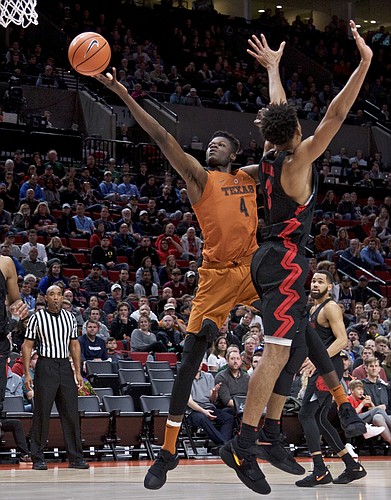 A McDonald’s All-American, Bamba is averaging 10.9 points and 9.8 rebounds while shooting 50 percent from the floor. According to hoop-math.com, he’s made 74.4 percent of shots at the rim.

Entering Big 12 play, Bamba is third in the nation with 4.27 blocks per game. Featuring a ridiculous 7-foot-9 wingspan, he has 15 more blocks than any other player in the conference.

Bamba has four double-doubles this season. From Harlem, N.Y. he hasn’t been able to stretch his range to the 3-point line, making only 3 of his 19 attempts. 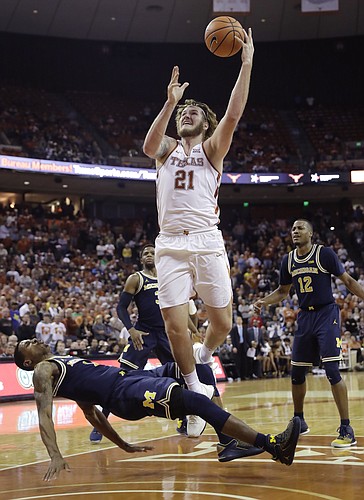 Texas forward Dylan Osetkowski (21) drives to the basket over Michigan guard Charles Matthews (1) during the second half of an NCAA college basketball game, Tuesday, Dec. 12, 2017, in Austin, Texas. Michigan won 59-52.

Osetkowski sat out all of last season after transferring from Tulane. He’s averaging 14.6 points and 7.8 rebounds, shooting 25 percent from the 3-point line. He’s scored 16-plus points in five of his last six games.

His older brother, Cory, played basketball at Columbia University. Osetkowski (pronounced: oh-set-COW-skee) averaged 11.3 points and 8.3 rebounds in his sophomore season at Tulane. He only had two scholarship offers out of high school. 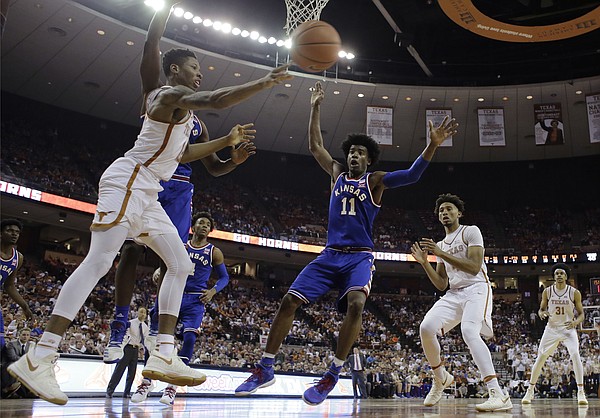 Averaging 10.9 points and 3.0 assists per game, Roach is making a team-best 82.1 percent of his shots at the rim, according to hoop-math.com. Roach is one of the Longhorns’ top perimeter defenders, snagging a team-best 16 steals.

From North Shore High in Texas, Roach played on the same high school basketball team as KU football standout Dorance Armstrong. He won two Texas state championships in the triple jump, including a jump of 50 feet, 8 inches in a meet on the UT campus.

ONE THING TEXAS DOES WELL

The Longhorns rank seventh in the nation in scoring defense, holding opponents to 60.4 points per game. Only Duke, Gonzaga and VCU have scored more than 60 points against them. With Bamba in the paint to protect the rim, Texas guards can spend their time guarding the 3-point line. Opposing teams are only shooting 28.2 percent from behind the arc and 37.4 percent from the field.

Texas is one of the worst 3-point shooting teams in the country through its first 12 games of the season. The Longhorns are making a lowly 27.8 percent from the 3-point line and they are missing their best outside shooter, sophomore Andrew Jones, because of a fractured wrist. 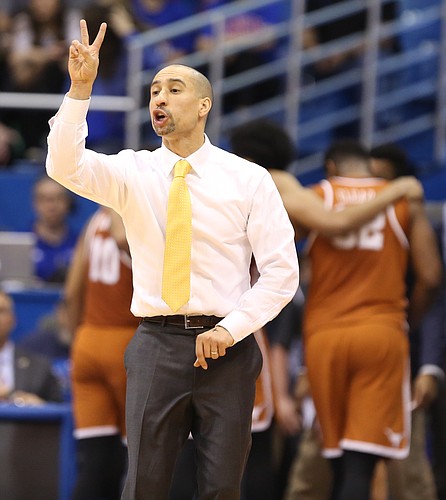 Texas head coach Shaka Smart calls a play during the second half, Saturday, Jan. 21, 2017 at Allen Fieldhouse. by Nick Krug

In his third season with Texas, Shaka Smart earned his 200th career coaching victory in early December. He coached for six seasons at VCU, which included a run to the Final Four in 2011. Six of his eight previous teams have advanced to the NCAA Tournament.

Kansas by 4. The Longhorns will present a tough defensive challenge for the Jayhawks, especially with their ability to guard the 3-point line. In their past six games, the Longhorns have allowed more than 60 points once. Even if KU is held below its scoring average, can Texas fight off its own scoring troubles?

At first I thought it would be good to have the first road game before students return to campus, and then I realized it's only UT and the students are still camped out at the football stadium. :-)

It will be interesting to see how Bamba matches up with Dok. 7-9 is crazy, but it is tough to defend dunks.

What are the chances Bamba gets a clean block on one of Dok's shots and he powers through anyway?

I would like to see the power through move and more than once. A foul or two on Bamba. If they guard on the perimiter like it's being touted then we should be able to get it inside by driving and passing to Doke?

The Key Matchup will be against Osetkowski, who will guard him?