For this first week, I wanted to look at two different plays from Kansas' 31-17 victory over South Dakota State on Saturday.

Coach says this is a basic "One-Back Power" play, where offensive linemen on the right side down block — or block in the opposite direction of the run — while the left guard pulls around.

I found a good illustration of this play in this article by X&O labs. 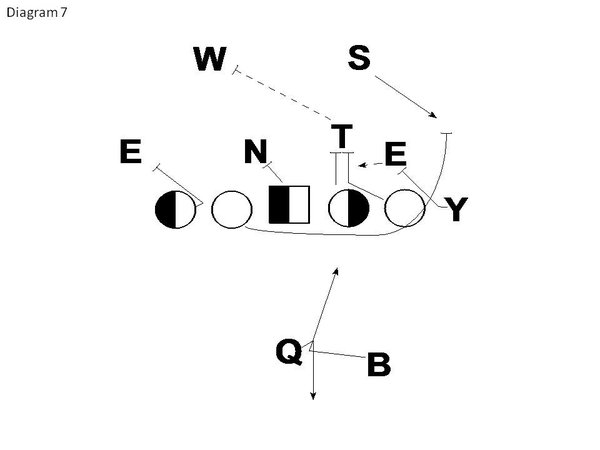 We get a good view of this blocking on the replay starting at 15 seconds.

One of the first things to notice is that KU defensive end Josh Williams, who starts on the hashmarks, gets knocked out of the play by SDSU tight end Seth Daughters.

"Basically, the tight end, for lack of a better term, whups that kid," Coach says. "He gets after that defensive end pretty bad right there."

Even with that happening, KU still should have enough defenders on that side of the field to make the play. The Jayhawks are in an "over" front, meaning they have more defenders to the side of the field of the tight end (in this case, the right side).

When asked about the breakdown, here's what KU coach Charlie Weis said after the game:

It's pretty easy to spot from the film, Coach says.

KU linebacker Huldon Tharp (No. 34) and safety Lubbock Smith (No. 1) are occupying the same gap.

In essence, Tharp should be coming down where the red line is below, forcing the action to the outside, where he has Smith's help.

Instead, Tharp is caught on the outside of pulling left guard Taylor Suess, creating a hole up the middle for Zenner.

That gets Zenner to the second level, where KU cornerback Greg Brown is unable to make the tackle.

Though Brown starts in good position ...

"He takes a bad angle right there," Coach says. "He just needs to take a better angle and put it on the ground for a 10-yard gain instead of a 99-yard touchdown."

KU safety Bradley McDougald is unable to catch up to Zenner, but part of that can be credited to SDSU.

Did you notice what happened at the top of the screen on the play?

SDSU's receivers fake a bubble screen. McDougald and KU cornerback Tyler Patmon have to honor the possibility of a screen there, moving closer to the line of scrimmage ... which takes them farther away from the run on the other side.

Just like SDSU above, KU's offensive linemen "down" block, or block their men in the opposite direction of the run.

The only difference is that fullback Brandon Bourbon comes through the right side to throw a kickout block in addition to left guard Duane Zlatnik pulling.

Coach says KU's players on the right side do such a good job that Zlatnik doesn't have anyone to block for a while.

That starts with KU tight end Jimmay Mundine, who lines up in the slot and drives SDSU's Doug Peete out of the hole.

"That’s a great job by the slot receiver taking care of an outside linebacker," Coach says. "If you could get that every time, you’d be pretty happy if you’re coach Weis."

which allows Zlatnik to continue running.

Here, Cox shows some maturity and patience, waiting behind Zlatnik instead of running past him.

"He sticks his arm, lets 67 lead him up to that second level," Coach says. "Then he continues to use that arm and has a nice stiff arm on 19 there to gain some extra yards." 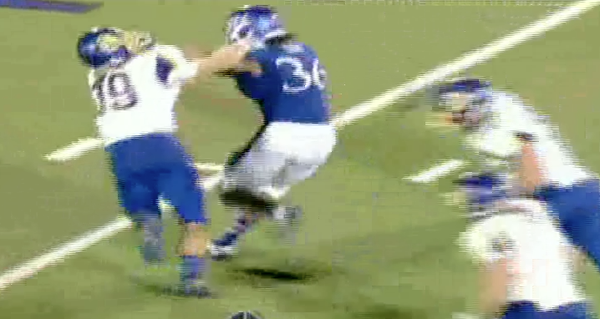 Coach says the play could have even been better with an improved block from KU receiver Kale Pick on the opposite side.

Pick starts by getting his hands on SDSU cornerback Winston Wright. 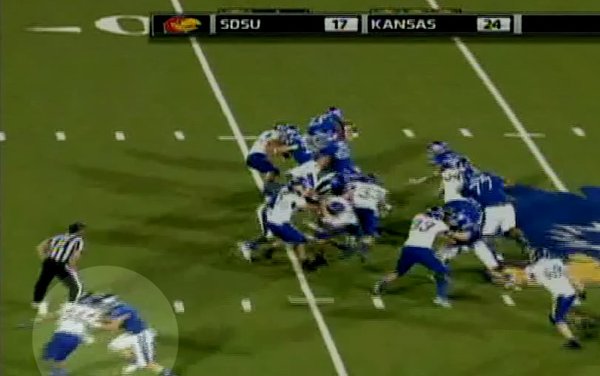 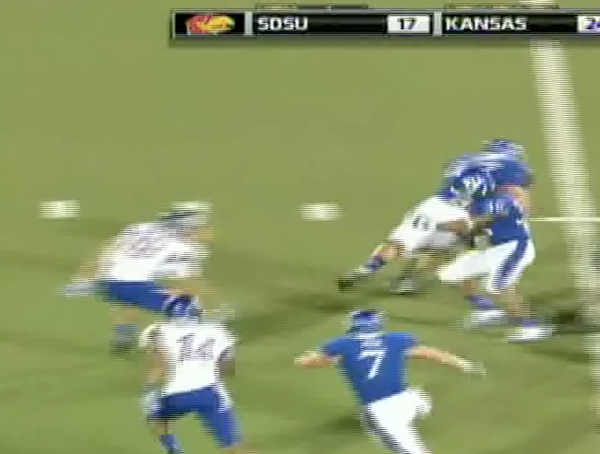 and Wright eventually slows Cox down a step before No. 19 Bo Helm later makes the tackle. 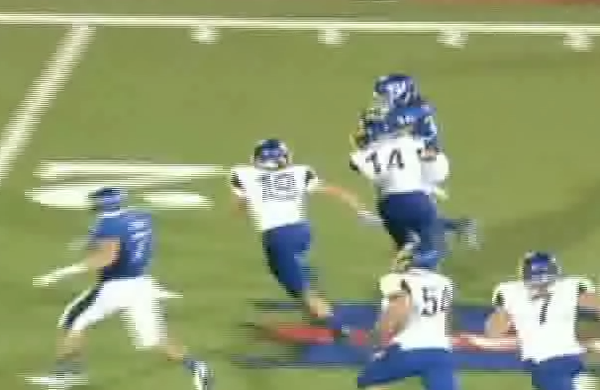 "It turns out being good effort by 14 here from the backside to get in on the play," Coach says. "He kind of gets stiff-armed at first, but he saved that from being a touchdown."

After taking an early lead against KU with a huge run, SDSU was essentially knocked out of the game late with Cox's 39-yard run.

Now you know the rest of the story.

Great and fun article to read Jesse! Interesting to see in both plays how the play of the outside wide receiver had such an impact on the runs going the length they did.

I was waiting for this analysis...Great Job.

They say football is a 11 people on each side of the ball. So often we focus on the one taking the snap and the one holding the ball, but this really shows you how there are 11 people working to making a play successful or unsuccessful. How a simple block on the far side could have made that a touchdown run is very fascinating to me.

I'd love for one of these everyday, but that's because I can't get enough football right now.

Agree, could use a play a day for the itch.

I love this stuff! I can't wait for more.

Josh Williams probably enjoyed it even less than Tharp.

I see Brown as the guy who really missed this one. Tharp, yeah, but Brown was worse. He didn't have anyone blocking him. Another little trick to get the line all nice and stacked up is to yell , "Ball, ball" in this situation to get the D to freeze in their tracks and be looking down while the rb breezes right past you. I'm surpised these old boys didn't do the fumblerooskie on us.

I understand where you would see Brown not being blocked and still missing the tackle being an issue, however, do you have any clue how hard it is to change direction when you're running full speed, especially when you're trying to tackle someone running full speed as you. The game speeds up even faster. In that scenario, a tackle by Brown would have been pure luck. The main responsibility goes to Tharp here, sorry.

That's a tough one for Tharp. He basically took one step outside and became the goat. True, he should've held his gap, but if Williams hadn't been completely owned it never would've mattered.

A fine line between success and failure. Great breakdown.

Would be a hard one to watch with the teammates and coaches in a dark room about 15 times. Tough, but hopefully Williams will be red eyed and on fire every play Saturday.

Awesome breakdown! Love to see this kind of in depth articles for the fans (like me) who have trouble taking their eyes off the player with the ball.

Both are basic trap plays, and it wasn't a poor call on defense that made it happen, just poor execution by Josh Williams and Greg Brown. Josh Williams was really slow getting out of his stance and made it super easy on the TE to knock him out of the play which put Tharp in a really bad position of trying to compensate for Williams' mistake and as a result, Tharp ended up out of position which ended up taking Lubbock Smith out of the play as well. Greg Brown took a very poor angle and if he just made contact with Zenner, then, either Zenner trips over his own feet or Lubbock Smith or McDougald makes the tackle and prevents the TD.

Lubbock had completely run past the play. He was as out of it looking for a safety as anyone mentioned above.

I don't look at other teams' websites to compare but I'm thinking we are lucky to be KU fans and get this kind of stuff. Awesome, good work Jesse and "coach".