Coach starts by saying that, while KU punter Ron Doherty's punt is deep, it still could have been placed better.

Notice that with their "shield" alignment for the punt, the Jayhawks have all their players lined up from the middle of the field over to the right side of the field.

"You'd really like to see him kick this down here to the bottom of the numbers or even closer to the sideline so you can keep their return man pinned to the sideline."

I asked Coach if directionally punting was a tough skill to master.

"For people who don't punt, you would think that would be a hard job, but this guy's a college punter. He's a D-I punter," Coach says. "Basically, that's his only job, though he might be a kicker as well. That's his only job, so you have to be able to get your job done when your number is called."

Coach says KU runs a nice scheme at the top, as JaCorey Shepherd (No. 25) and Victor Simmons (No. 27) criss-cross.

OU's two players aren't expecting this, and they nearly collide for a second, which allows both Shepherd and Simmons to get a fairly clean run down the field.

"That's great. They basically switch responsibilities," Coach says. "Those guys are both in their lanes running down the field. They're doing a nice job right there."

Coach sees one problem with KU's players at the seven-second mark of the video.

"One rule on special teams, when you're covering kicks, never follow the same-colored jersey. You've got two guys in the lane, and that's never going to end up being very good for you. They should spread out a little bit more. Move over here to your left a little bit more. Get your lanes a little bit wider right there."

KU's players do start to spread out their lanes after that, and Coach says the Jayhawks are in an ideal position to make this tackle at 9 seconds while forming a semicircle around Brown. 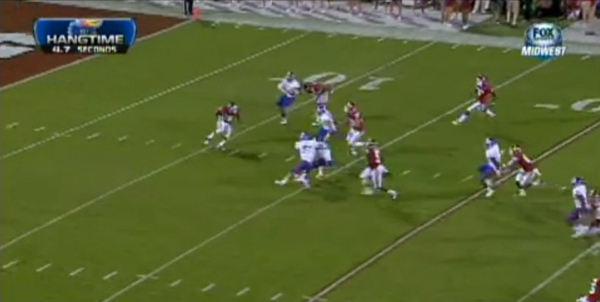 Coach says the biggest mistake comes from KU long-snapper Justin Carnes, who is second from the top in the semicircle above.

"See how his head goes down, and he is not in control right there?" Coach says.

"He needs to get his body under control, break down. If you give the Oklahoma punt returner two more yards, then your coaches aren't going to be upset with you. But when you don't break down, and you let the guy run right past you to your right ... all your help right now is over here to your left.

"Keep it on your inside shoulder, keep leverage on the return man, break down, be under control. Then, if the Oklahoma punt returner has to slow his feet down, then you've won, because then you can rally the troops and get to the play."

Carnes' overrun of the play, though, allows Brown to work back to the sideline.

Brown gets by Carnes by Jesse Newell

Even after the miscue, Coach says KU has what appears to be another great picture at 12 seconds.

Once again, though, Coach says a KU player doesn't break down in time. This time, it's Pat Lewandowski at the top of the screen (No. 61), who can't slow his feet down in time when Brown cuts back. 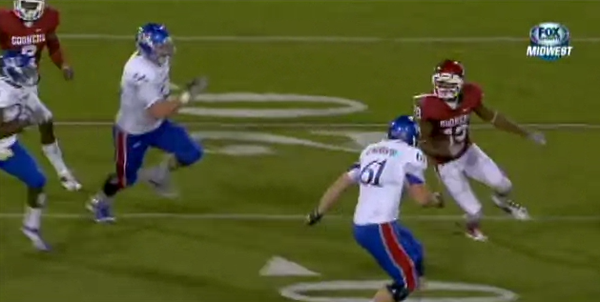 "Get your body under control," Coach says. "Get your shoulders more squared to the returner."

Coach also notes that both Shepherd (No. 25) and Marquis Jackson (No. 28) overrun the play to allow Brown to break free.

After Brown cuts back to the middle of the field, he makes a move past Shane Smith (No. 91). 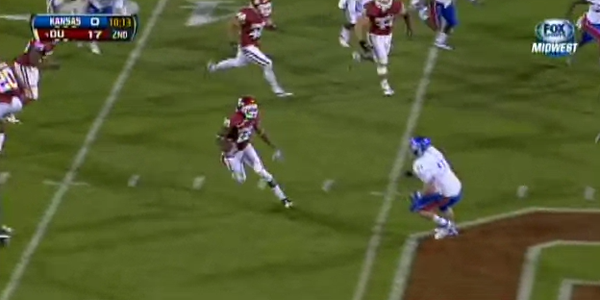 Because Smith was one of the blockers in the shield, Coach says you're probably not going to ask him to make a lot of tackles in punt return, as his main objective is to protect the punter.

Brown uses his speed from there to get to the end zone.

Coach says the Jayhawks could have stopped this play on two different occasions if they had used better technique when Brown seemingly had nowhere to go.

"Obviously, Oklahoma's probably a deeper team than KU is as far as talent goes," Coach says. "They're going to have probably some better players on their special teams than KU's going to be putting out there. It's going to come down to the guys you put out there, not necessarily the scheme you run or any fancy tricks that you might try and use.

"(But) you still can go back and rely on your fundamentals."

Seems a little long-winded. Simply saying "our special teams play is an embarrassment to the game" would've sufficed.

But I appreciate the effort.

I, on the other hand, found this analysis interesting. The more I know about the game, the more I enjoy it. Thanks for going to the trouble, Jesse, and thanks to your "mystery" coach.

Might be a reason that Sheperd should have played more earlier in the season, particularly in this situation. Sheperd has the speed, but he was ill prepared for this. He'd have been more useful on offense, IMO.

"Because Smith was one of the blockers in the shield, Coach says you're probably not going to ask him to make a lot of tackles in punt return, as his main objective is to protect the punter."

Here's the problem, coach ... Smith was one of THREE linemen blockers in the shield. So we're going to cover a punt with 7 tacklers, 3 offensive linemen and a punter? Clearly, the execution was poor ... but, it's also unusual to put three linemen in the backfield on a punt. They should be linebackers or running backs ... someone who can take on a rusher AND tackle in the open field. Once the OU returner made it through our first wave of tacklers, it was all over. Our three offensive linemen and punter were no match for the returner in the open field.

I think that was the point Coach was trying to make. Smith might have looked the silliest on the play, but you're not going to expect your personal protector (a defensive lineman) to make a one-on-one tackle on a punt returner in the open field. I'm sure some KU fans might have been upset with Smith on the play, but that's just not a play you can expect him to make.

Exactly ... the more relevant point is that he shouldn't have been on the field to begin with.

and maybe part of the reason for CW's "all hands on deck" comment earlier this week.