I figured this week would be as good as any to break down a good play for Kansas, so here's running back James Sims' 30-yard touchdown run in the fourth quarter of the Jayhawks' 20-14 loss to Oklahoma State.

Coach says this type of run is called an outside zone, or "stretch" play.

Coach says the play is designed to give the running back three different options. He can "bang" it up in the middle if he gets some good blocks there; he can "bend" it back to the inside if the defense overpursues the play; or he can "bounce" it all the way to the outside if the blockers pinch down and keep the defenders logged in the middle.

"It's definitely a play where your running back's got to have a little bit of patience," Coach says, "and use some of his vision to make sure he hits the right spot."

In this instance, Sims chooses the "bend it back" option, which ends up being the right choice.

Let's get back to some of the blocking, though.

Coach says the technique used by the offensive linemen here is called "pin and pull." Basically, KU's right tackle Gavin Howard pins the defensive lineman to the inside, while right guard Randall Dent and center Trevor Marrongelli pull around him.

"The pin block is very good by the right tackle," Coach says.

"The right tackle does a nice job of pinning the three-technique (defensive lineman outside the guard) all the way down right there."

As Marrongelli and Dent pull around (red arrows above), there aren't many people in the hole for them to block.

Coach says there are two reasons for this. For one, KU has a bunched formation, putting all of its players close to the ball without putting any receivers out wide. 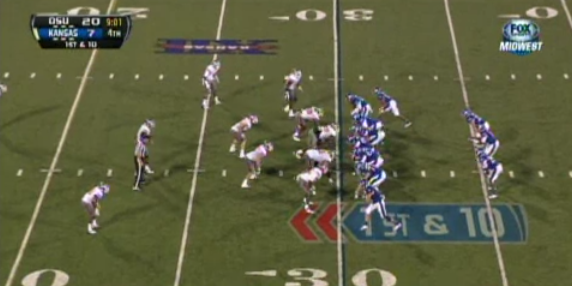 That formation gives KU's outside players an advantage, allowing them to get inside of OSU's defenders to drive them to the edge.

The other reason KU's linemen don't have many people to block is because of KU's outside players: receiver Tre' Parmalee (No. 11, top of picture) and tight end Jimmay Mundine (No. 41, bottom).

Outside blocks by Jesse Newell

Coach says Sims gets an OK block from Marrongelli — "Probably not his best block," Coach says — but the defender that Marrongelli is blocking ends up overrunning the play. 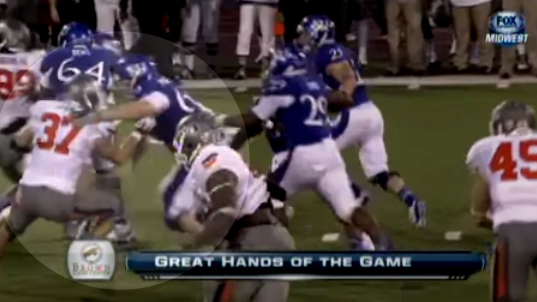 When Sims sees this, he decides to "bend" it back to the inside. 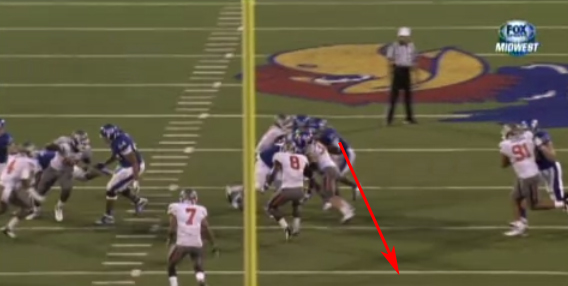 Sims "bends" back. by Jesse Newell

Two things to note from the picture above. For one, OSU's No. 8 is totally unblocked on this play, but he overruns the play as well. Coach says that's the beauty of a stretch play — sometimes you don't always have to block everyone, as defenders often run themselves out of the play.

The second thing to note is OSU defensive linenman James Castleman (No. 91). From looking at this screenshot, you might expect him to make this tackle, as he appears to be in the hole.

This is a good time to chronicle his path throughout this entire play thanks to KU left tackle Tanner Hawkinson (No. 72). 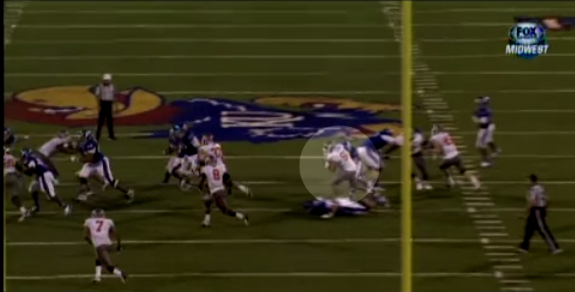 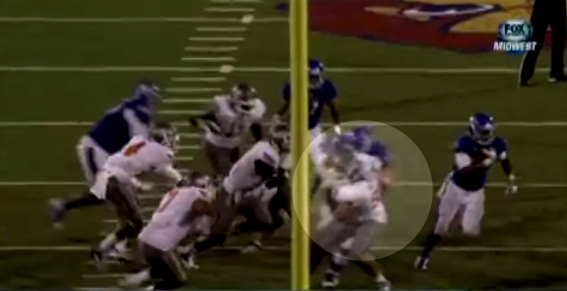 Hawkinson drives Castleman all the way across the field, then finishes the block by knocking the D-lineman to the ground.

"That's a great finish," Coach says. "In football terms, that's what's called a pancake, when an offensive lineman pretty much flattens a defensive lineman like that. He's getting some props in the film room for that one.

"That's great. He really finishes — runs his feet and finishes. He gets the guy on skates, then finishes it and lands on top of him. That's awesome right there."

Sims gets one more block, this one from receiver Kale Pick. 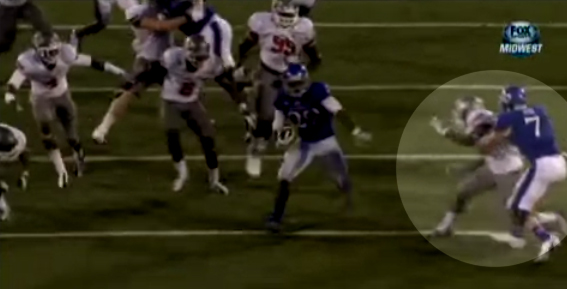 "Big plays happen outside and deep," Coach says. "(Pick) right there is doing a nice job of getting downfield and getting the defensive back covered as well."

Sims does the rest, as following a nice cut, he uses his speed to get to the end zone.

"Just a good football play," Coach says. "Good design. Nice job with some good blocks and finishing things off, and of course, a good run by the tailback.

"But of course, he didn't do everything on his own right here. He owes his teammates a lot of credit as well."

I wanted to get Coach's quick thoughts on JaCorey Shepherd's failed punt block attempt at the end of the KU-OSU game.

Coach says, with better technique, this is a ball that would have been blocked. 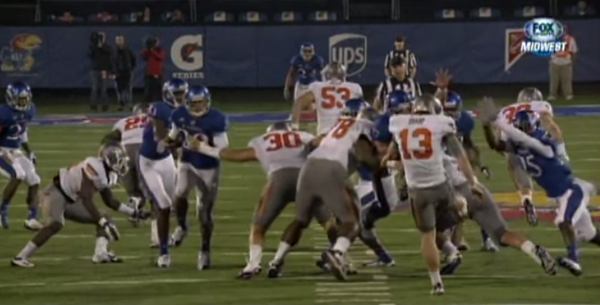 As you can see from the photo above, Shepherd extends his arms too high into the air and also isn't in a position to block it down, leaving his fingers up high.

Had he blocked down — and tried to block the ball lower — Shepherd would have been in a better position to come up with a game-changing play for the Jayhawks.

Yes, I think that Mr. Hawkinson got a few attaboys in the film room - very impressive block.

Though Jacorey's technique wasn't right, his effort was. Gotta love the go for it attitude.

Jesse, thanks for these weekly breakdowns. It's a lot of fun.

It's hard to believe, but this team is just a handful of plays away from having a winning record. Fans just need to be patient. Next year we'll start making some of those plays, and the next year I predict we'll make a lot of those plays.

That is the great thing about this team and the agonizing thing as well. If Shepard blocks that punt, KU has huge momentum, great field position, and OSU is reeling with just a couple minutes to go. While it can be painful to think that if Shepard had just put his arms out a foot lower there might have been a different outcome, it is that same thought that has me so excited for this team going forward. This team is definitely turning the corner.

Great work as always Jesse. I really enjoy reading these. While this is great to see Hawkinson's play, I was secretly hoping you might include in this week's segment how wide open Tre Parmale was on the final KU offensive possession on Saturday. The radio announcers made it sound like he was all alone and would have scored easily if Cummings had seen him. TV didn't mention it. Was he that open?

Question 2... How's your tape recorder from the basketball media day?

Jesse, how big a factor do think Cummings and Parmalee's lack of height was on that 4th down play? I know that it can be very difficult for a short QB to see a short WR over all the linemen in front of him, so my question is did Cummings ever look downfield or was he focused on Bourbon the entire time? Thanks for doing this and thanks to "Coach for taking the time out of his schedule to help out with this.

texashawk — I don't think that had much to do with it. Cummings' first read on the play appeared to be Bourbon. From my recollection, when he received some pressure, he tried to get it quicker to Bourbon. I don't think he looked down the field.

Thanks Jesse, appreciate it.

I know it's been rehashed already, and doesn't make any difference, but in the slow motion replay, it really looks like the trajectory changes when it goes by Shepherd's hands. Has he ever said whether he thought he actually got a piece of the ball? It looks like he did.

Jesse has been an embarrassing writer to this paper, wonder when they get rid of him.

Hopefully long after they get rid of you.

Jesse do you have an old, semi-literate, jealous girlfriend or something?

I think it is the Chinchilla. I heard Jesse sold him for a new tape recorder.