This week's Breakdown will look at Kansas' failed fake field goal on fourth and 10 in the second quarter of Saturday's 41-14 loss to Baylor. Video is below.

Let's first explain the process that might go into KU calling for a fake field goal.

Sometimes, the call is, "Kick the field goal," which means kick it regardless of what the opponent does.

Other times, though, the call is "Check fake field goal," which means to run the fake if you get a certain look from the defense.

"The (holder)'s not just going out there on his own and saying, 'Hey, we're running the fake field goal here,'" Coach says. "It's definitely on the staff and their special teams players to know what they're looking for."

Coach says, most likely, KU went over certain scenarios in practice to show the potential looks Baylor might give.

In this case, Coach believes the Jayhawks saw a "seven-by-four" setup from Baylor.

Take a look. Using the short snapper's head as a midline, BU has four players on the left side of the screen and seven players on the right, meaning KU should have a blocking edge to the left. 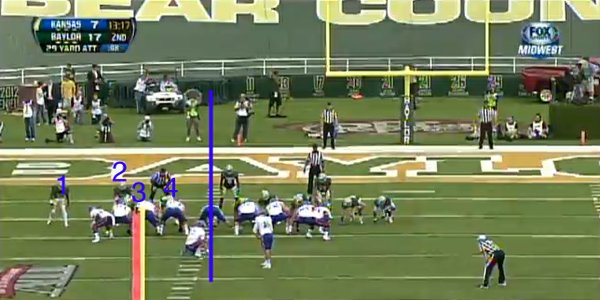 "That could be what he sees, and going into this game, that could have been KU's automatic check," Coach says. "If you see seven-by-four, and the coach says, 'Hey, this time, run, "Check field goal,"' or whatever your call might be, and he sees seven-by-four ... 'OK, we're running the fake.'"*

When the fake is on, Coach says the holder will call out a certain signal in the snap count to alert the players on the line.

"I thought we were going to check off and go ahead and kick the field goal, but that's not the way it turned out. The play was to roll to one side or the other based on the look. It just so happened it was to roll to the boundary based on how they lined up."

Coach says this is a basic "Power" running play (we discussed those more in this Breakdown blog if you're interested), where offensive linemen on the left side down block — or block in the opposite direction of the run — while the right guard pulls around.

The biggest problem here, Coach says, is that KU's right guard Duane Zlatnik (No. 67) pulls into the wrong hole.

We get a good look at this from the end zone camera view. Instead of pulling into the hole by the referee (blue arrow), Zlatnik goes wide with his lead block (red arrow). 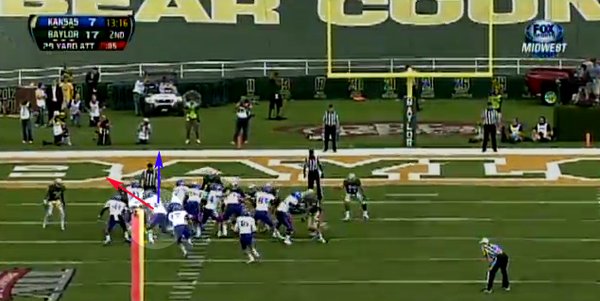 Coach says the hole a pulling guard picks depends on the defensive front, but here, it's clear that Zlatnik should have stayed to the inside.

Another way to know this: KU's outside blockers Jimmay Mundine (No. 41) and Shane Smith (No. 91) are both blocking their defenders to the outside. 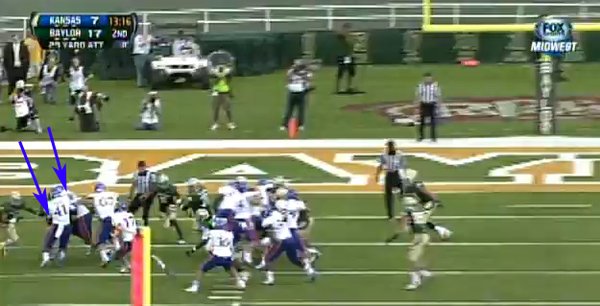 That tells us they're both expecting this run to go behind their backs.

We see what happens on the video when Zlatnik doesn't cut up into inside hole. When Jablonski starts to run, the opening isn't there because Baylor's standup linebacker is unblocked. 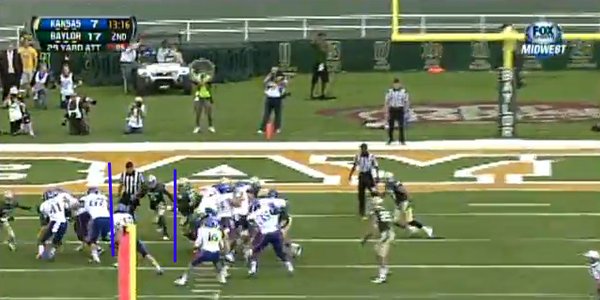 This forces Jablonski to go wide, where he's tackled for a one-yard loss.

"I'm not saying they're going to get a first down by any means, because Baylor's got a couple defenders there," Coach says, "but if (Zlatnik) pulls up in the hole, the quarterback can follow him right up the hole and might have a chance."

Coach says, ideally, Mundine and Smith would start with a double-team on Baylor's defensive lineman before working up to block one of the linebackers (No. 1 in blue below).

Then, Zlatnik could pull around in the hole to take out the other linebacker (No. 2 below). 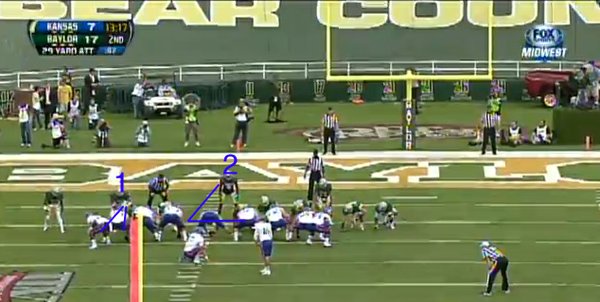 Coach did say that checks are commonplace on special teams. For example, on his team's shield punt, if an opponent sends four guys to rush the punter through the "A" gaps (on the left and right side of the long snapper), the coaches will "check" to a rugby punt to give their punter some extra space.

The opposite is true if a team shows that it is rushing from the edge on a rugby punt. The team then checks back into a standard punt so the punter doesn't run into pressure.

In that example, one of the shield blockers would check to the different call after getting word from the coaches.

"The coaches are on the headsets and making sure that they're seeing the same thing up top (in the booth) as what the coaches are seeing on the field," Coach says. "Then, the coach on the field gives hand signals to one of the upbacks in the shield."

Coach admits, in the play above, he's a bit surprised that KU dialed up this particular fake.

"It's a pretty risky play on fourth and 10," Coach says. "You'd think this would be maybe a fourth-and-6 or less call.

"You'd probably want to have a pass play called, but like we said earlier, it's something you go into the game with as far as your gameplan. Everyone just has to be on the same page with it."

That was just a bizarre play for the situation considering that KU essentially had to score a TD if they ran a fake. I do agree that the check in that situation should've been a pass play instead of a run because of the distance needed to convert the first down. Saying that, I don't think Charlie, or Clint if he made the call, should've given them a check option in that situation. Let Prolago try and build some confidence by actually making a field goal because KU may need that in the ISU game if it comes down to a FG game next week, and yes I'm conceding a Tech blowout because KU still sucks on the road.

Was a coaching miscommunication. This was not suppose to be called even with our terrible kicking game...

Q: How was it called? A: We have the worst kicking corp in the history of college football...and maybe high school football. We had no choice.

Q: Why didn't it work? A: We're not what some may call "good" at executing...well...just about anything.

20 something kids wanting to win...see the opertunity and try it. It did not work. Well a learning experience for them. Perhaps they should have looked over to coach and indicated that they thought they had a chance? Then the coach could indicate his opinion.

I understand the concept of the check to a fake. It makes sense, and in this defensive alignment, it may have even been a defensible call. HOWEVER, not on 4th and 10. This is a down and distance where the call from the coaches, i.e. Bowen, should have been "kick the field goal". Don't even give Jablonski the option to check into the fake.

As a general strategy, s fake FG doesn't bother me, especially with the kicking woes we have had (although this should have been more than makeable). But, field position and game awareness are as big a consideration as is the defensive alignment. Take the points here. Period. It's things like this, as well as the poor clock/time out management against UT that worry me about the coaching staff's in-game awareness. Put your team in the best position to win; with the coaching decisions referenced above, I don't know that the staff has done a good job of that in the last couple of games.