How did Kansas State's Tyler Lockett get so open right before the end of the half?

For this week's breakdown, let's look at Kansas State receiver Tyler Lockett's 48-yard reception over the middle with 11 seconds to go in the half.

First, let's take a look at the coverage.

From looking at the film, Coach says KU is playing a Cover 42 zone — more commonly known as a Cover 6 zone.

The reason it is sometimes known as Cover 42 is because, essentially, KU is playing Cover 4 on the strong side of the field (the one with more receivers) and Cover 2 on the weak side of the field.

What does this mean?

Essentially, on the side with three KSU receivers, KU will have two players splitting the deep half of the field in a zone.

On the side with one wideout, KU will have one safety playing a deep zone over the top of that receiver.

Some nuances of the coverage are more complicated than we'll get into here. For example, Coach says KU's defenders will read the second receiver from the top of the screen to determine exactly where they'll go on the play.

The basic concept, though, will look much like this — from a screenshot I found online from the NCAA Football 12 video game. 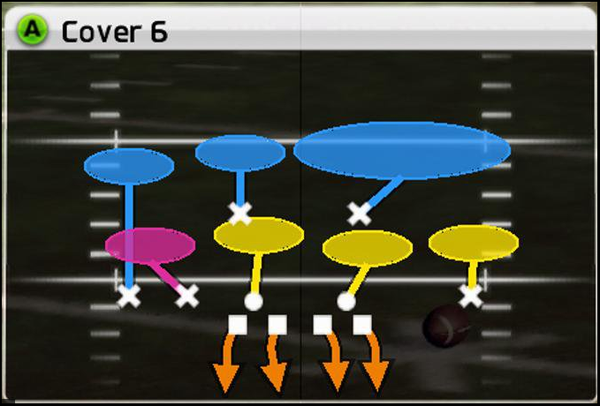 If you look, KU's setup before the play almost exactly mimics the Cover 6 diagram from above.

So what goes wrong?

Though it's tough to see the number because of the camera angle, this appears to be KU safety Lubbock Smith (who also was playing that position on KU's previous drive).

In the Cover 6 diagram above, we can see that Smith's responsibility on this play will be to cover his deep "quarter" of the field. In this case, it's middle quarter of the field toward the three-receiver side. 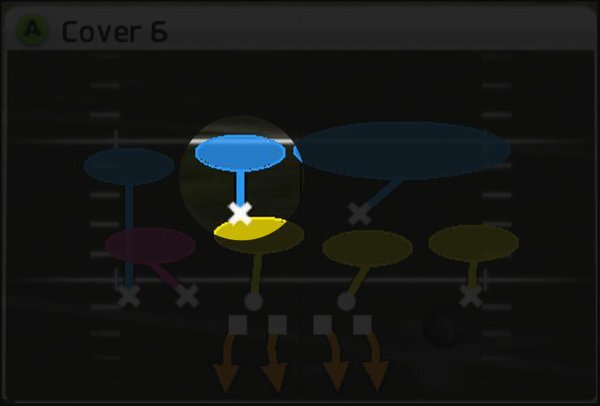 Smith does something different instead.

Notice he starts this play on the beak of the Jayhawk.

Once the play begins, instead of backpedaling to keep everything in front of him (blue arrow), Smith turns upfield to cover the tight end (red arrow). 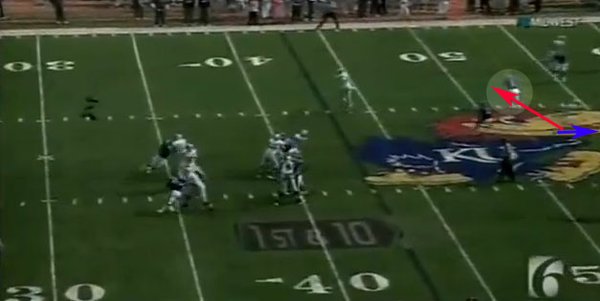 This leaves the deep middle to his side wide open. 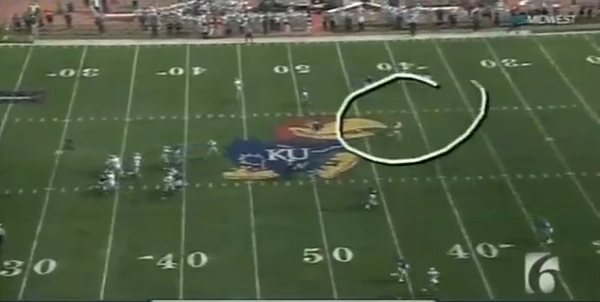 "The guy who is standing right on the Jayhawk is the one who messes up," Coach says. "He should definitely lock onto this (route)."

Coach says the only reason the safety might break on the tight end is if he thought KU was in a man-to-man coverage. Obviously, that wasn't the case, as every other KU player was showing Cover 6 zone principles.

One other aspect to look at: Notice how close KU's cornerbacks are to the receivers, considering there are only 11 seconds left to go in the half?

The cornerbacks and safeties are between eight and 10 yards away from KSU's receivers.

It's not a huge adjustment, but Coach says you'd like to have your secondary guys back a little farther.

"If it’s me, I’ve got all those guys back to at least the 45-yard line," Coach says. "When you’re deeper, things sort themselves out in front of you."

With a few more yards to see everything, perhaps one of KU's defenders could have noticed the blown coverage and tried to make up for it by trying to stay behind the deepest receiver.

As it was, KSU stole back all the momentum before halftime — all because one KU defender out of 11 found himself in the wrong spot.

Smith broke up and left the deep middle of the field open, like you said. How he could possibly leave his assigned position when the man he should have been covering ran right by him . . . I can't understand.

Coach got it right, I was at the game and was paying particular attention to this play and I told my wife that Lubick Smith screwed up his coverage.

I loved how I've never watched or read anything about a ksu game all year, yet I could watch this game and have instant player recognition with Lockett because his name was on his jersey!

Yes because having the names on the back of the jerseys would clearly make KU a better team.

Dude, you often make me laugh, but this issue is just getting old. Please find some new material so we can laugh again.

Who 's joking? Actual conversation with a KSU fan while watching the game and seeing the name on the jersey? Ah: oh my, there is another Lockett brother KSU fan: no I think it's kevins son Ah: geezus I'm old!

KU should have been playing cover 4 deep there. At least cover 4. Maybe even 5 deep and 3 under with a 3 man rush.

I guess KU should hire 2GenLtown b/c he knows what play should have been called. AP defensive coach of the year and what not.

Couldn't do much worse than Vic.

How about rushing 3 and dropping 8 back into coverage ???

The real issue was SOMEBODY didnt understand the basis principle of keeping EVERYONE in front of you. So simple on a play right before the end of the half, dont give up the big play, yet one of our guys did....and that comes down to coaching period.

No the biggest problem with our defense is that it is not aggressive enough. Everyone knows they can throw with concern because KU won't try to intercept. That is the coaches fault, not that Smith blew his assignment. If you noticed Smith was not in for the next couble of defensive series. In fact I don't remember seeing him again while I was still there.

Hey, Jesse. As always, I love your articles, and I think I learned something. But, I have an idea for you that will help you sell more books and help our coaching staff do their jobs.

I think you should put together an Idoits Guide to Playing Defense. Feel free to use the illistrations above to help bolster your book. They work!

Also, your're article could have been a lot shorter if you would have used the following approach:

Q: How did Kansas State's Tyler Lockett get so open right before the end of the half?

Coaches Answer: The guys were not doing what they were told to do.

Now get to work on that book, buddy! And this time, I don't think you need that loser Jason King! :)

It actually looks like KSU gets the TD if the receiver keeps going instead of cutting to his left....

Exactly, Lockett was a sprint champion in HS and would have out run the defense if he kept going straight ahead. He also made a mistake.

I am sure that the answer to your original question, it is because his obesseness works only one day a year. I'm sure you would get out of shape with all those temptations that I am sure populate the North Pole. What with all the Santa groupies and all that damn candy. Also, I bet there is less gravity at the NP. So, is he really fat, or just height challenged?

And, if you are manginobutth00lz, you would just say "Tulane" and "google it".

Haven't our safety's been caught out of position all year. Maybe too much coaching, even in backyard football your natural instinct is to drop back in that situation.

In the words of Ron White, "You can't fix stupid."

"...all because one KU defender out of 11 found himself in the wrong spot."

First of all, the only people that "find themselves" in wrong spots are drunks and innocent victims. Smith PUT himself in the wrong spot because of his lack of football IQ and awareness of what the hell is going on around him, which seem to be pervasive themes amongst the defense.

Players with good football instincts and physical talent can overcome the occasional bad coaching call. Players that lack those attributes can only be helped so much with coaching and scheming. Our defensive players suck, bottom line. And Gill & Co. are not good enough to coach them out of being stupid. And the replacements aren't being recruited either.

Bill Young was good enough and we can some talent on that side of the ball. That's why we won the Orange Bowl.

Wasn't it Dezmon Briscoe that said a few years back his game on the field was greatly improved by playing a bunch of XBox football. I bet Turner Gill discourages that kind of frivolity!

So these DII coaches...are they looking for a D 1 job, we may have some openings soon.

Isn't Shealy also the secondary coach? I sure hope he's got his house up for sale now because he better not have a job at the University of Kansas after this season ends.

He's the CB coach, but Lubbick Smith is a safety and Wimberly is the safties' coach.