For this week's breakdown, I pulled out three successful offensive plays from Oklahoma State in its 70-28 victory over Kansas.

My question to Coach this week was simple: What stands out most to you as the breakdown on each play? 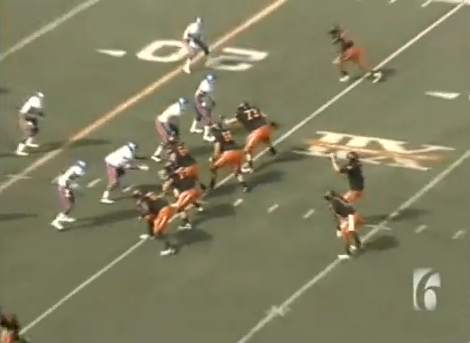 None of them are in a typical three-point stance with a hand on the ground. This is a result of OSU's fast-paced offense.

"That’s why defensive linemen are in three-point stances," Coach says, "so they can fire off the ball and get a good push against the run, or even against the pass."

OSU's receivers make two good blocks on the outside, but the second thing that stands out most to Coach is the angle taken by KU safety Keeston Terry, who is unblocked.

If you watch the video again, Terry rushes up to the line of scrimmage to tackle Blackmon before circling back as the receiver runs by him. 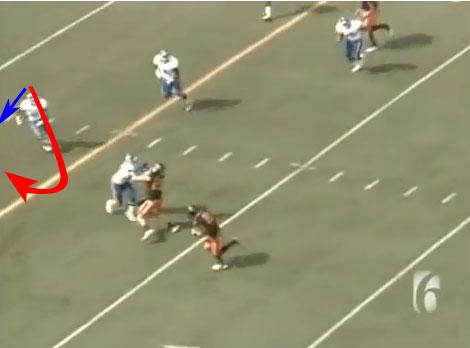 He essentially takes a horseshoe route (red arrow) instead of taking an angle to where Blackmon is going (blue arrow).

"That’s a poor angle to the play," Coach says. "I always tell my guys, even when we’re blocking, take an angle to where the guy’s going, not to where he’s at, because the guy’s obviously moving as well."

"Sometimes, (offenses) are going to get you on a play, but make the play a five-yard play or a 10-yard play," Coach says. "Don’t turn every single big play into a touchdown."

Let's move to the second play — a deep pass down the sideline from Weeden.

Coach says what stands out most is KU's front three.

"Obviously, they’re not getting any pass rush at all," Coach says. "It’s hard when you give good quarterbacks time to survey the field and time to throw, because a lot of times they’re going to find an open receiver, even if you are covering with eight."

Coach estimates that Weeden would have had at least three to four more seconds to throw the ball if he needed it, based on penetration of KU's defensive linemen.

Essentially, KU's nose tackle is being triple-teamed, which leaves the ends one-on-one. Neither gets within a few feet of Weeden when he releases the ball. 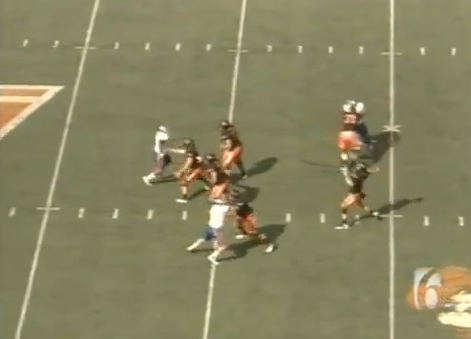 As for the coverage, Coach says it appears KU's Greg Brown is playing man-to-man press — a coverage usually reserved for blitzes or when a cornerback knows he has safety help. 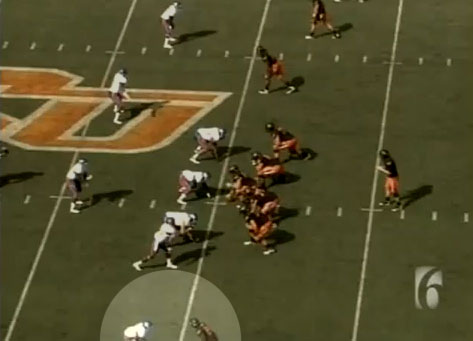 With eight defenders to cover five receivers, Coach says there was some sort of "mental bust" on this play. Most likely, it was one of two things:

Coach says either way, this play was doomed to fail with as accurate as Weeden is. Give a good quarterback that much time, and he's going to find an open receiver.

The third play is a touchdown throw by backup QB Clint Chelf.

Coach says the thing that stands out about this play is how much KU's defenders bite on the play-action fake.

Because the Jayhawks' safeties commit themselves to the run, OSU receiver Isaiah Anderson is left wide open in the end zone. 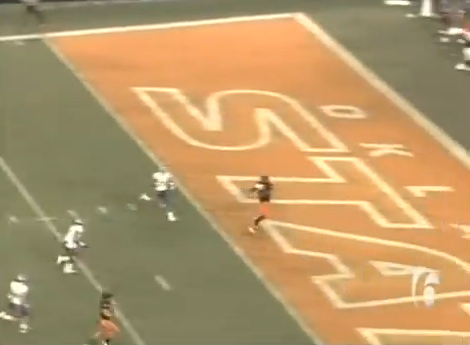 KU coach Turner Gill talks a lot about getting players to "fly to the ball" defensively.

This is an instance, Coach says, when that mind-set might be harmful to a defense.

"That’s what you teach your defense is create pursuit angles — flying to the ball; get there fast; get there aggressively," Coach says. "But you also have to be disciplined in your flying to the ball: Read your keys, and make sure you’ve got your eyes where they’re supposed to be on every given play."

Very informative article, well done! Sounds like horrible defensive execution, either the players do not know what to do, or are not doing it. That, plus it sounds like the defensive ends are wimps (but if that is the case, then you need to have a surprise fourth rusher coming from somewhere on each play). But 8 guys covering 5, without being on the same page with coverage. It is up to the coaches to coach the right things, often enough, to make them automatic in the game. Sounds like we need this D II offensive coordinator to be our defensive coordinator, starting immediately.

Thank for the breakdown Jesse. It's always informative. If there is anything encouraging, it is that the vast majority of the players are at best 2nd year players. Lot's of time to grow - and hopefully recruit a few big nasties up front like the O did last year.

Coaching is the big part of this. Other teams can stop the no-huddle. Through really 4 or 5 years, even in Mangino's time, this team has never been coached well to stop the no-huddle. This was a perfect storm game though--OSU is highly ranked, was given deference by the officials, was at home, and had a 28 Y/O calling plays. We spent this week waiting to see if under-privileged high school kids could play in the Big XII at basketball, and we get this professional clown show in Stillwater. CJ Henry at least knew what the optics were in an undergraduate sport, and bowed out.

But after all that, the coaching stunk because they made no adjustments. Fundamentals are lousy as is conditioning. Again.

Wow. This article makes you wonder what actually goes on in KU's practices. In my short work history I've learned that the bad managers just tell people to work harder, faster, better, but can't tell people how to do it. Meanwhile the good managers are those who are also good instructors. Here's a coach who in short order showed us how KU players can do better. So now I do wonder if KU's coaches are doing the same, or if they just tell these players "be better."