Addressing the scary reality of playing sports in a pandemic, David McCormack's defense and more 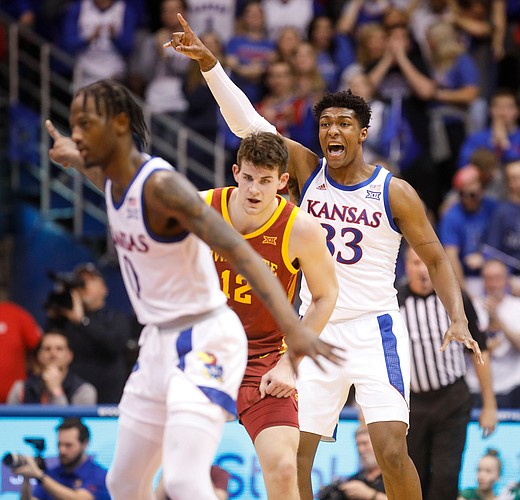 Kansas forward David McCormack (33) alerts his teammates on defense during the first half on Monday, Feb. 17, 2020 at Allen Fieldhouse. by Nick Krug

Live team sports have officially returned, with Major League Baseball and the WNBA returning to action in full force over the weekend.

I’m not a huge baseball guy, but I found myself constantly checking scores and looking for updates and highlights throughout the past several days. And while many of the games and clips looked weird because of the empty venues they were played in, they were still great all the same.

After all, they mattered. They were real. And they were a welcomed distraction from what’s going on in the rest of the world, even if only for a moment or two.

Now that they’re back, and with the NBA set to return this week, I think it’s human nature to have that little voice in the backs of our heads that keeps asking the simple question of how long do we get to have them?

That sets up this week’s first “Ask Us Anything” question and it’s a doozy.

As always, we really appreciate all of the questions. It’s been great having this feature back on our site. If we didn’t get to your question this week, we’ll try to get it answered next week.

So be sure to keep the questions coming. We can never have too many and you can submit them in a bunch of different ways.

With that said, let’s jump back into the return of team sports and our first question, which looks at what happens if things go off the rails and leads to something worse than several Marlins baseball players testing positive.

Honest question I keep asking that no one seems to want to answer...what do you think happens to this attempt at a season if one or more players, coaches, staff, etc gets COVID and dies?

I’m not sure there’s a more important question that can be asked in sports right now.

And, as scary as it is to type this, I think we have to assume Mic’s scenario is going to happen.

I get it. It might not be an athlete — although Atlanta Braves star Freddie Freeman certainly would tell you that’s possible. But it sure feels like it could be someone.

And if it happens, I wouldn’t be surprised at all to see the dominoes fall the way they did in March after Utah Jazz star Rudy Gobert tested positive and then sports as we knew them were shut down for months during the next couple of weeks.

That’s not to say that what Major League Baseball decides or does will have a direct effect on college football or college basketball. But when you’re talking life and death, I can’t imagine it not having some impact.

I think the powers that be at all levels — commissioners and presidents, coaches and GMs, parents and athletes — have to have some kind of plan in their minds right now for how to move forward if the unthinkable does happen.

Because operating on the fly and out of emotion might not be the best way to go if you’re suddenly faced with such a serious situation.

But they all have to be ready to do so in case it suddenly crosses their desk.

Same thing goes with the return of sports.

I think the pro leagues and college athletics are in different spots on this one.

Professional athletes are under contract, paid to do a job and grown men with agents and families and experience guiding them.

To me, the difference there makes it much more likely that a catastrophe such as the one Mic mentioned above happening in college sports would immediately lead to shutting the whole thing down at all levels and across the country.

I’m not saying the pros would power through if someone in their ranks paid the ultimate price, but I think it’s more likely that they would — or could — consider it.

Let’s hope no one ever has to answer this question for real, one way or another.

• Our second question this week comes from Dirk Medema, who inquired in a comment after a recent “Ask Us Anything” blog about David McCormack’s defensive prowess in 2020-21.

“Guessing that Marcus Garrett will lead the perimeter into another great D year, but the biggest question to me is, can McCormack come close to replicating Dok’s D on the perimeter? Dok proved that you don’t need to score from beyond the arc if you can efficiently score down low, but you absolutely have to be able to defend out there. It was the difference between being a good and great D last year.”

This is such a great question and right on the money. The thing that took KU’s defense from solid to spectacular last year was the improvement Udoka Azubuike on the perimeter, his ability to move his feet and the work he put in to have the conditioning to play big minutes.

Without that, KU’s defense would have still been solid because of Marcus Garrett, Devon Dotson and Ochai Agbaji, but it likely would’ve been vulnerable to more breakdowns and might not have so thoroughly suffocated opposing offenses night after night.

But you basically said all of that. And me rehashing it was me taking the long way to an answer here, because I truly don’t know.

I think McCormack has it in him and the added maturity and experience certainly won’t hurt. But he’s got a long way to go still before he moves like Azubuike did and, even if he gets to that point, he’s not quite as long or imposing as the former KU center in the first place.

McCormack’s a good athlete. And he’s comfortable on the perimeter. But there’s a difference between being comfortable out there and being flat-out nasty.

I’m not sure KU ever has, nor ever will again, seen a player Azubuike’s size play with such activity on the perimeter. He used his feet, his hands and everything he had in the tank to get the job done and turned out to be spectacular.

I think McCormack can get there. And he has proven that putting in the work to reshape his body is not too much for him.

But shedding some of that baby fat like he did in the past is much different than leaning up the way Azubuike did between his junior and senior seasons.

One of the biggest reasons Azubuike did it was because he knew he had to — it was his final chance to show his skills to NBA scouts who might shape his future.

McCormack still has two years remaining and hasn’t been criticized nearly as much as Azubuike was during his first three seasons at KU. So will McCormack be as hungry as Azubuike was to prove himself?

At end of season, @SJacksonLJW suggested #kufball would be less talented, less experienced in 2020. @PFF_College has them as underdogs in every game. What do we think now? Is this a winless season?

It remains to be seen exactly what the 2020 KU football schedule will look like and whether it will be played to completion or played at all.

But, as of today, that’s the plan, with the newly announced home game against Southern Illinois added for Aug. 29 in place of the Sept. 5 game versus New Hampshire that is no longer happening.

Because KU still has so many question marks and has had very little time to get to answering them, it’s hard to call any game on the schedule an automatic win.

But the Jayhawks have to win the opener. A loss to Southern Illinois, which finished 7-5 last season at the FCS level, would be a brutal blow to Les Miles’ chances of turning things around.

So let’s assume the Jayhawks win that game, whether by a single score like in last year’s opener against a Missouri Valley opponent (24-17 over Indiana State) or by 40.

After that, there are no gimmes. Coastal Carolina beat KU in Lawrence last season. Boston College features Power 5 talent at enough positions to win at least half the time and the rest of the schedule is Big 12 foes.

One thing worth point out is the fact that KU’s Sept. 12 game at Baylor now will come on the back end of two weeks worth of preparation.

KU replacing UNH with SIU leaves that Sept. 5 date open and the Jayhawks play at Baylor on Sept. 12.

The Bears, meanwhile, have a new head coach and will play an SEC foe (Ole Miss) six days before hosting the Jayhawks.

They’ll probably still be double-digit favorites, but at least the schedule, as constructed today, lines up in KU’s favor.

With all of that said, I’ll sum it up by answering your question a little more directly — I don’t think we’re looking at a winless season for Miles and company, but it’s definitely hard to envision it including more than 1 or 2 victories.

Hey @mctait any idea if Perry Ellis will still be part of bball staff or if his rehab/coaching stint is done? #AskKUSports

Seeing Perry Ellis around the program throughout the 2019-20 season was an absolute pleasure. And you can’t convince me for one second that his presence didn’t have a positive impact on the 2019-20 roster.

The man always appears to be in a good mood and genuinely seemed to appreciate the opportunity to be around his alma mater while rehabbing his injured right knee.

But Ellis is still young (26) and has a chance to make a lot of money playing basketball so there’s no reason to think too hard about him being around permanently just yet.

So that’s exactly what Ellis is doing.

Cleared to return to full basketball activity earlier this summer, Ellis in early July signed a contract with the Ehime Orange Vikings in Japan.

The Orange Vikings play in the Japan-B2 League and Ellis is expected to head overseas in late August.

Before injuring his knee last summer while playing with Self Made in the TBT in Wichita, Ellis last played during the 2018-19 season in Turkey and Germany.

He also has played in the NBA’s G League and in Australia since leaving Kansas following his stellar four-year career from 2012-16.

Thanks Matt. It’s kinda crazy to see my name and an honor to get your endorsement. A little follow up question: how much carryover do you see between players from year to year? It would seem that David benefits from seeing Dok become “nasty” on the perimeter (what we see.), but even more important for him to see what happened behind the camera in Dok developing. Coaches probably help in promoting it, but wondering how much the players look to replicate the past prep. Obviously everyone wants the results.

My child #4 plays AAU Hoops. Play for 45 minutes, but no handshakes after the game. Covid19 is so tricky.

I just hope no matter what happens we don't start pointing fingers. If we play then we know there is a risk and we take precautions for them. We do our best to protect the players, coaches and referees. At some point we have to take a risk. We can't hide inside forever and sports is a great way for people to feel somewhat human. Another is movies. I miss seeing movies being released. It's been crazy the last couple months. And yes I know they've released some to video but they seem to have slowed way down now. I'm ready for some Top Gun and some College Football!