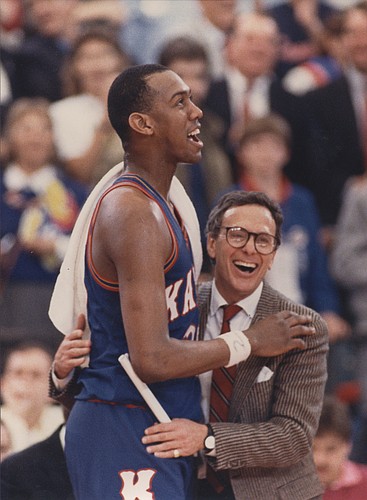 The spectacle of March Madness entertains and amazes the nation each and every year. But for the vast majority of the players out there deciding whose brackets get framed and whose get tossed in the recycling bin, the win-or-go-home tournament ends in pain.

Only a select few can survive The Madness and call themselves champions of the NCAA Tournament.

Over at The Players’ Tribune — a website designed to let professional athletes share their first-person accounts of athletic triumphs and trials — there is a series called “Tales of Madness,” in which former college hoops stars detail all that is great (and devastating) about The Big Dance.

Wouldn’t you know it, you can read about an early exit and "one shining moment" from the Kansas perspective, thanks to entries from a couple of all-time greats.

On the polar opposite end of the NCAA Tournament experience, KU legend Danny Manning describes the joy of winning the 1988 national championship.

“I played in four NCAA tournaments at Kansas, but that 1987-88 team was a special group,” Manning says. “Whenever a team wins a championship, everything has to fall into place. The coach has to have the right gameplan, coaches have to implement it and the players have to buy in and execute it. You have to catch some breaks along the way, but you also have to be dedicated and disciplined in your actions.

“In that 1988 NCAA Tournament, we weren’t the most talented team. We weren’t the most athletic team. But as anyone who’s ever watched the tournament knows, once you’re in, everyone’s record is 0-0. It’s all about which team can get hot at the right time.”

Pierce and his fellow Jayhawks from that 1996-97 KU team know that better than just about anybody who put on a college basketball uniform. Kansas entered the NCAA Tournament with just one loss, and it came in double overtime at rival Missouri.

KU’s previous dominance that season didn’t matter against No. 4 seed Arizona, which, much like Danny and The Miracles, started clicking at just the right time and won a national title.

“Arizona was good — they had a tremendous backcourt comprised of Mike Bibby and Jason Terry — but I didn’t have much doubt that we would win,” Pierce says. “Honestly, I thought we would crush them. Our team was stacked with NBA talent. The expectation was that we were going to bulldoze through the early rounds of the tournament. I had my sights set on the Final Four, where I figured we’d probably meet Kentucky, the defending national champs. That was the game we were all looking forward to.

“But Arizona came to play, and we weren’t at our best.”

Nine years earlier, Kansas entered the postseason as a No. 6 seed with 11 losses. Manning says coach Larry Brown’s unwavering belief in the Jayhawks helped them overcome what had at times been a bumpy regular season — the Jayhawks were 12-8 at one juncture.

Manning admits no one outside of the program expected KU in the Final Four, but there the Jayhawks were, playing in nearby Kansas City, Missouri, against fellow Big Eight program Oklahoma in the title game.

In the final seconds of a one-possession game, Manning hit two clutch free throws to push Kansas to an unlikely national title.

At The Players’ Tribune, Manning says his favorite memory from that magical ride actually came after the final game ended.

“Sitting in the locker room with my teammates after winning the national championship, we talked about our season, which was my senior season. We talked about the tournament. And that’s when it hit us: That was the last time we’d ever be together on the court as a team. It was a somber moment for me, but also a very satisfying one knowing that I was a part of a group that was able to win a national championship. A lot of hard work, sweat and tears went into it. A lot of guys made huge sacrifices for our team and for each other. We’d been through such uncertainty and endured so many tough losses, and here we were, reaping the benefits together — as a team.”

“The tournament is unforgiving,” Pierce says. “If you have one bad game, that’s it. Throughout my career I’ve had many losses, but all these years later, this is one that still stings.”

Paul Pierce’s website looks back at his days at Kansas 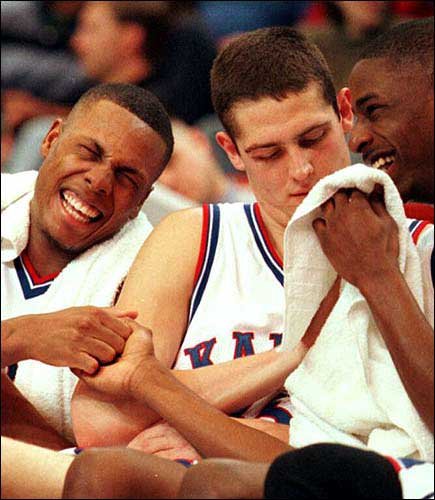