Bill Self sends video message to young fan in hospital 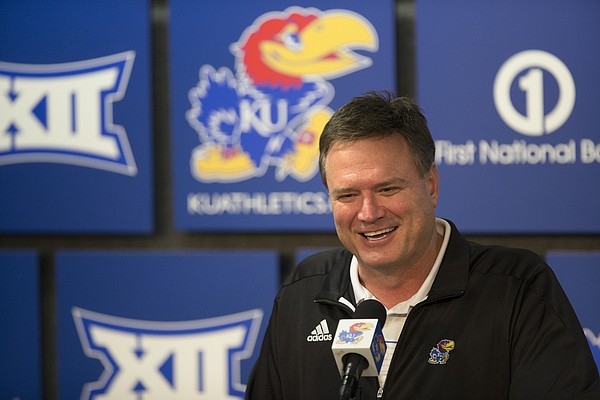 Kansas coach Bill Self speaks during a news conference following the NCAA Tournament selection show on CBS, Sunday, March 13, 2016. The Jayhawks were given the No. 1 seed in the South Regional and will play Austin Peay on Thursday in Des Moines. by Nick Krug

Bill Self is a popular and busy man around Lawrence, but the Kansas basketball coach doesn’t mind taking some time to boost the spirits of a young fan.

A short video message from Self began making the rounds on Facebook Monday.

The coach wished a bleated happy birthday to a young fan named Brooklyn, who, as the KU coach pointed out, had to celebrate from a hospital room.

“I know you’ve been going through a little bit of a rough stretch here recently,” Self says to the young Jayhawks fan in the video, “and your lungs are filling with blood right now, but I’m sure they’ll get that straightened out.

"But I just wanted to wish you a happy birthday. I hope you’re doing fine. I know that’s gotta get you down a little bit, especially on an important day like this.

"But I’m sure mom and dad are gonna take care of you in a big, big way.”

And, in typical Self fashion, the coach found a way to really personalize the interaction.

“I wish my players were just half as tough as what you are,” Self told the youngster.

I think you meant "belated" happy birthday, not "bleated" :)