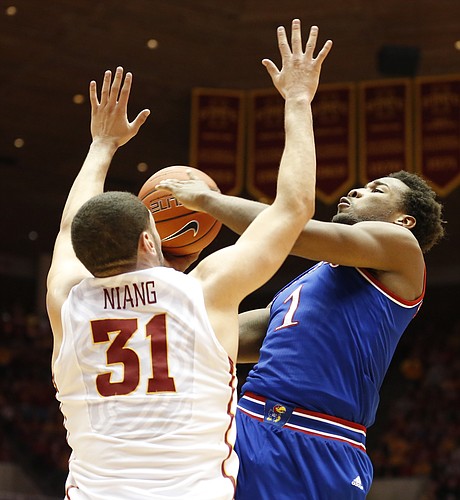 Kansas guard Wayne Selden Jr. (1) hangs for a shot against Iowa State forward Georges Niang (31) during the first half on Saturday, Jan. 17, 2015 at Hilton Coliseum. by Nick Krug

When former high school teammates get together, it doesn’t take long for some shenanigans to break out — even at the NBA Combine.

With Kansas guard Wayne Selden Jr. and Iowa State forward Georges Niang both in Chicago for this week’s pre-draft combine, it only makes sense that the former Tilton School teammates would reunite as they embark on an important step in their professional careers.

This morning, Selden didn’t hesitate to take advantage of an opportunity to try and clown Niang, a star for one of KU’s biggest rivals over the past few seasons.

Apparently when Niang wasn’t around, Selden put his KU 2016 Big 12 Tournament champions T-shirt with his buddy’s phone and snapped a pic to share on Twitter, claiming Niang was showing his support for the Jayhawks.

Not exactly a likely scenario for one of the most popular ISU players in the program's history.

My roommate at the NBA Combine @GeorgesNiang20 showing support on his bed this morning..😅 #RockChalk pic.twitter.com/ed2lSlotPs

However, maybe Selden should have chosen another piece of KU gear for the joke. He set up Niang for an easy comeback, considering the Cyclones won the Big 12 Tournament in both 2014 and 2015.

“That’s cute that you only won one of those things,” Niang tweeted in response, “I’ll make sure to bring my 2 shirts out tonight!!”

That's cute that you only won one of those things I'll make sure to bring my 2 shirts out tonight!! https://t.co/d9zzO2BeXu

None by Georges Niang

Selden had no choice at that juncture but to bring out the big guns — or big rings. The KU guard posted a photo of him wearing two Big 12 regular-season championship rings.

@GeorgesNiang20 well in that case.... Bear with me, my 3rd one is being made now 😎👊🏾 pic.twitter.com/itW2YPmQ1N

Wouldn't surprise me if Niang ends up playing in the Windy City. Great competitor and has a nose for the ball.