The stage gets bigger every day for the top-seeded Kansas basketball team, as the Jayhawks make their NCAA Tournament run.

Friday was a day off from basketball for KU, which is one win away from a trip to Houston for the Final Four.

The Kansas players, coach Bill Self, as well as their counterparts at Villanova, and coach Jay Wright, stayed busy this afternoon in Louisville, Kentucky, with media interviews previewing their Saturday night Elite Eight showdown at the KFC Yum! Center.

— Check out the highlights from the afternoon of interviews: Jayhawks and Wildcats preview Elite Eight matchup 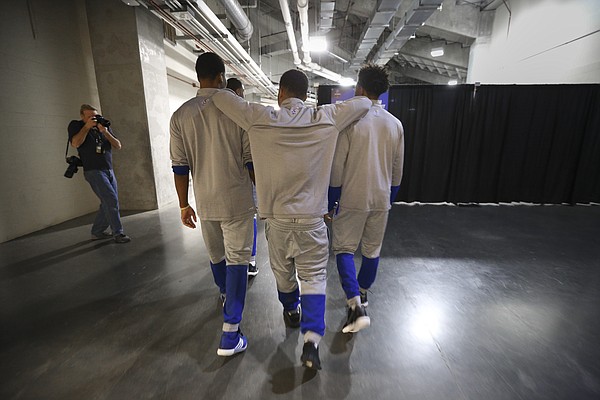 Kansas guard Frank Mason III rests his elbows on the shoulders of teammates Wayne Selden Jr., left, and Devonte' Graham as the starting five make their way toward interviews with media members on Friday, March 25, 2016 at KFC Yum! Center in Louisville, Kentucky. by Nick Krug