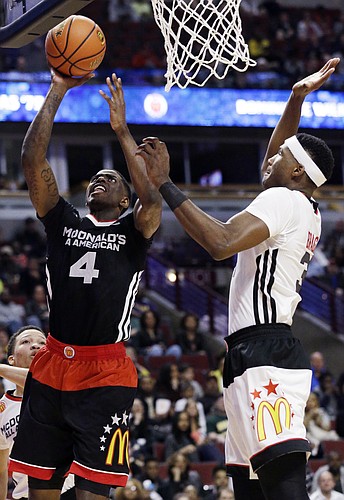 Almost every spring, just before the Final Four, Kansas basketball fans get a sneak preview — courtesy of the McDonald’s All-American game — of who’s coming to Lawrence in the fall to help KU in its continuous chase of national championship banners.

Wednesday night in Chicago, 6-foot-9 forward Carlton Bragg, who committed to Kentucky … err, make that Kansas … was the latest “next big-time player” on display.

Bragg, a five-star recruit from Villa Angela-St.Joseph in Cleveland, scored nine points and hit a 3-pointer for the West.

The Jayhawk-to-be also delivered one of the top plays of the prep all-star showcase, jumping into the passing lane for a steal, on his way to a windmill jam.

It came right after his West teammate, Kansas recruiting target Stephen Zimmerman, threw one down.

Here are a few other angles at the back-to-back, highlight-reel slams:

Want to hear something crazy? Bragg actually considered taking his uncontested jam to the next level.

“I was thinking about going between my legs, but I wasn't quite warmed up,” Bragg told Cleveland.com. “The windmill I felt like I could have got it, so I just did it."

His team lost, but really, participating in the game is a huge deal in itself, and the smiling young big man spoke about that with Cleveland.com.

He also had a message for Kansas fans: 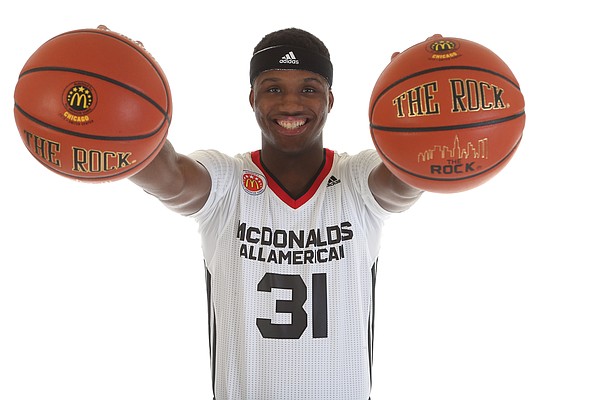 Cleveland prep forward Carlton Bragg — who has committed to Kansas University — poses for a photo prior to Wednesday’s McDonald’s All-American Game in Chicago.

Before the game, PrepHoops Illinois caught up with Bragg, who declared his love for pick-and-pop sets, explaining why he is considered a stretch-4.

Don’t worry, though. Bragg hasn’t abandoned playing in the paint. In fact, he said that’s one area of his game that he made a point to improve upon in his senior season.

“My post game got a lot better and I’m more aggressive.”

Bragg said KU’s style of play led to him choosing Bill Self’s program as his college team of choice.

With the expected departure of Cliff Alexander, Bragg could make an immediate impact for KU next season, providing the Jayhawks with another long body to man the paint with Perry Ellis, Landen Lucas and Hunter Mickelson.

If Bragg can score in the post at the college level, that would make KU’s offense — which often lacked that ability in 2014-15 — more complete and dangerous.

Wow! Great effort so far Bill! Not even ranked in the top 50 classes?

I think that this is one of those years where that it is actually a good thing. Our PG spot is solid with Frank a junior and DG a sophomore. Our wings only need maybe one more piece with Wayne a junior, BG a junior and Svi a super soph. The only real need right now is a true center. Which Self is addressing with recruiting Zimmerman, Diallo and the transfer Mike Thorne Jr. . I think you need to back away from the ledge and calm down. We will be a much more mature team next year.

Rick, kind of head scratcher isn't it? I hope we have a good stretch run here, but I am not confident we will.

Don We need more help than that. We need two wings a big man, and a SG. We have one of those right now and a lot of competition for the rest. What is perplexing is that we have playing time, starting playing time and we cannot entice a big or SG. I am hopeful it all work out.

No one should feel good about this team improving for next year. There is just as good chance a couple of players will regress.

At least next year we should be able to dangle the new housing.

I dont understand the gloom and doom. Is recruiting for the upcoming season already over and done with?

Might just be me but I'm a bit tired of these articles about future KU players. I really don't care what he does or how great he "seems" to be right now. Means nothing until the first season game. Look at how many came in with all the hype and then fizzled out in college play (Cliff Alexander for example). I'll start paying attention when the season starts and then we will know who has what it takes to play for KU.

As for next season, unless KU can produce a leader that can take over games and inspire others then it will be a struggle. Big man is a must have as well.

THEN DON'T CLICK AND READ!!! Nobody's forcing you to read articles you're so sick and tired of..

Well, I for one, really appreciate Carlton Bragg's enthusiasm for coming to KU. You never know which MickeyD is instant impact, and which ones need more time to adjust.

Looking fwd to seeing how this kid plays...