When a program with brand-name recognition like Kansas loses a game, it registers throughout the college hoops landscape. When one of the blue bloods gets blown out, that attention reaches another level.

The Jayhawks (currently ranked No. 10) experienced an unbelievably bad night Monday in Philadelphia, where Temple looked the part of the powerhouse program in a 77-52 drubbing.

Here is a look at some of the reactions to the surprising beatdown.

Score I cannot fathom even after watching from tip-off until the final buzzer: Temple 77, Kansas 52.

Bill Self might be bringing up the Topeka YMCA again in his postgame news conference.

Bill Self really still trying to figure out this group -- and who he can rely on.

Even if people weren’t watching the game, the score grabbed their attention.

This was a spanking behind the woodshed as my buddy @cbfowler would say ! TEMPLE 77- KANSAS 52 http://t.co/URNyI5nAk6

The loss reminded Fran Fraschilla of another not-so-great KU trip to The City of Brotherly Love.

What better place to get reaction to Monday’s game than RushTheCourt.net? The Temple fans, after all, did celebrate the win right there on the floor when the final buzzer sounded. 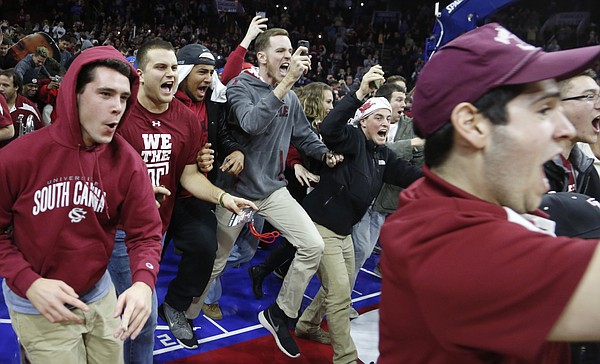 Temple fans run onto the court following the Jayhawk's 77-52 loss to the Owls Monday.

New from RTC: Three Thoughts on Kansas' Second Obliteration of the Season http://t.co/Q4biatNGXv @bsgoodman on what ails the Jayhawks...

RTC’s Brian Goodman had three thoughts on the shellacking:

While the lopsided score left some questioning the Jayhawks’ toughness…

Temple blows out Kansas after taking the subway to the game like bosses http://t.co/g6UvB3F0FY pic.twitter.com/6SkmW5LwGc @JayBilas toughness?

… others maintained KU is still a solid team which has played a serious non-conference schedule.

None by KPI Sports

Yes, that Kansas loss at Temple was bad. But keep this in mind: KU still has five top-50 KenPom wins. Nobody in the country has more.

@GaryParrishCBS Exactly. Kansas is a work in progress, but the Jayhawks played a good overall non-league slate -- and won a bunch of games.

@GoodmanESPN Kansas has five top-50 KenPom wins. Kentucky is the only other team in the country that also has five.

Know that nobody has more top-50 KenPom wins than Kansas before you say one word about the updated Top 25 (and one): http://t.co/247YPLiOUA

In Parrish’s rankings, which he updates daily, he only moved Kansas down to No. 15 (the day before he had KU ninth). Right now, the national writer has two Big 12 teams ahead of the Jayhawks: Texas (ninth) and Oklahoma (14th).

What can be learned from such a game?

Bad night for Kansas but not sure it's much more than that. Can't learn a ton from blowout like this. Everything went wrong. Gotta move on.

Seth Davis, of SI.com and CBS, thought Temple looks vastly better with its new lineup. (Not that he thought KU looked remotely good.)

Kansas was awful but Temple is exponentially better with two transfers who just became eligible. Owls can score now, which is scary.

And ESPN.com’s Eamonn Brennan wonders if the Temple loss even means anything for Kansas in the grand scheme of the entire season.

Still, he couldn’t overlook some bad tendencies that showed up in Philadelphia.

Temple is super hot, sure, but Kansas's first-shot defense is worse than it's been all season (by, like, a lot).

Well maybe some good old-fashioned public shaming will get this team's attention.

I'm ashamed and I don't even play. If this is what getting top 25 recruits means, give me the lower numbered recruits that don' t think their s--- doesn't stink. Horrible defensive effort. I would have brought in the walkon's at the 12 minute time out in second half. Let people play who want to play with some heart.

Here is what is not being talked about. Kansas is down a very important piece in the back court. Our players come from all parts and they played this game, at Temple, right before leaving for their first break and we are young.

The obvious. When you have more turnovers than assists, can't win on the boards and have poor shot selection...the wheels come off. This is still a work in progress and no one besides Frank is stepping up. Frank can facilitate the ball, hit the three and a mid-range, but he shouldn't be expected to do all of that and drive the lane.

The front court has got to get an edge and produce a leader. Everyone needs to be willing to play hard nose defense and hit the deck when necessary. Stop giving HCBS reasons to change the lineup because of a lack of effort in practice or not showing up to tutoring. Ridiculous.

This is a simple fix, but it has to be a fix the players want and buy into. You come to Kansas to be groomed for the NBA, accept the process. Merry Christmas Jayhawk nation.

Those 2 athletes that became eligible for Temple, just made them a legit team. Also check Temple's stats in the game prior to KU. Temple wasnt a good team until those 2 athletic dudes ("ballers") started playing.

You can NOT send the Jayhawks to the rim when the are 3-6 inches shorter with a team every bit as athletic as they are.