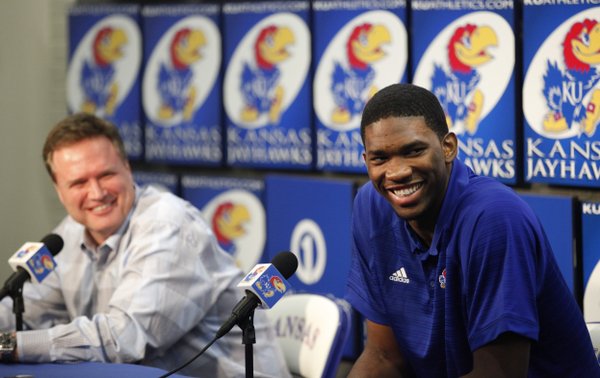 Kansas center Joel Embiid smiles along side head basketball coach Bill Self as he talks with media members during a news conference on Wednesday, April 9, 2014 at Allen Fieldhouse in Lawrence, Kan. Embiid announced his intention to enter the 2014 NBA Draft. (AP PHOTO/Nick Krug/Lawrence Journal-World) by Nick Krug

You might have seen something about that in the past 24 hours here at JoelEmbiid.com KUsports.com.

Column: Joel Embiid top 5? Puh-lease by Tom Keegan KUsports.com
Self: Embiid would have been focus by Gary Bedore KUsports.com 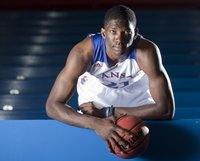 Our best of Joel EmbiidKUsports.com

The 7-footer's announcement wasn't just a big deal in Lawrence, though. His decision to leave KU will impact the landscape of college basketball next season and the shape of some NBA franchise for years to come.

• The folks who keep up with NBA prospects love Embiid.

Look no farther than Embiid's profile page at DraftExpress.com, where you can find his stats, measurements and more. And the details on the 7-footer and predictions on his future in the NBA will keep piling up in the weeks leading up to the June 26 draft.

Multiple NBA executives believe Embiid still has a chance to go first overall, but it's dependent on the medical testing that comes back at the Chicago predraft camp and also when he visits teams.

Goodman says Duke's Jabari Parker, if he indeed declares for the draft, should join Embiid and his KU teammate, Andrew Wiggins, as the draft's top-three picks.

• Seth Davis, of CBS and SI.com fame, still thinks Kansas will enter the 2014-15 season as a top-10 team. Number six to be exact — despite the exits of Wiggins and Embiid.

• Embiid's teammates and coaches took to social media to congratulate the young big man on his declaration.

Congrats to my bro @jojo_embiid on his decision! Taught me a lot this year. Can't wait to watch him keep improving&kill at the next level!

None by Kurtis Townsend

He grew up right before our eyes and now he's moving on...can't blame him. I got him going number one or two. @jojo_embiid

Assistant coach Jerrance Howard posted his message on Instagram: "Congratulations to @joel_embiid for entering the 2014 NBA draft. Him and @22wiggins are two of the nicest guys I've ever coached. I know nobody will miss them more than Jay Jay. Rock Chalk!"

Meanwhile, Selden went ahead and made his prediction for where his teammates will be selected in the NBA Draft.

Landen Lucas gave his fellow big man a hard time about one of the legends surrounding his days back in Cameroon.

THIS JUST IN: JoJo finally admits he never killed the lion 😂

Plus, to the surprise of no one, not long after Embiid made his decision official, incoming KU freshman big man Cliff Alexander began recruiting Myles Turner.

So, Alexander tweets for Turner to join him here. Let's get ourselves a new young lion lol.

We would have had a better NCAA tournament run had he been able to play. This makes zero sense.

This makes NO sense to me. Care to elaborate why you believe KU would have been better without a true do-it-all 7 footer on the roster?

You must have Toni Townes-Whitley and CGI Federal working on your website.