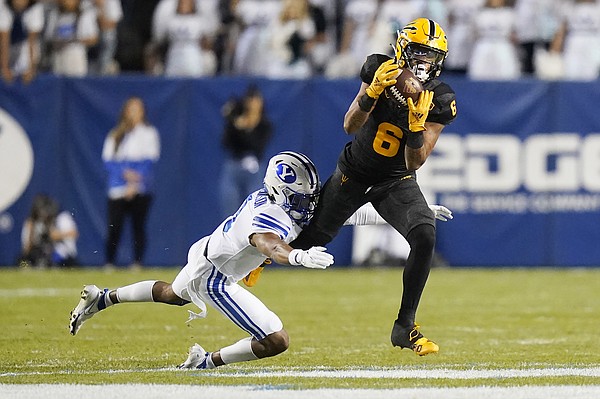 The Kansas football team is hosting three transfer players who could compete to start on official visits.

Arizona State wide receiver Lavon "LV" Bunkley-Shelton, as well as safeties Marvin Grant of Purdue and Kaine Williams of Alabama, arrived for their official visits late Monday afternoon and will be on campus through Wednesday. All were four-star prospects in high school, according to Rivals.com.

Bunkley-Shelton, who is 5-foot-11 and 195 pounds and from Compton, California, is visiting Kansas after recently completing an official visit to Oklahoma. He decided to transfer two weeks ago, and he had scholarship offers from Michigan, Ohio State, Florida State, Florida, Oregon, USC, Texas and many others as a high school All-American and Rivals.com's No. 86 player in the Class of 2020.

As a redshirt sophomore last season, Bunkley-Shelton caught 33 passes for 418 yards and two touchdowns while starting seven games. He had four catches for a season-high 76 yards in the win over Colorado and matched a season high with four catches in the Las Vegas Bowl loss to Wisconsin.

Grant, who is 6-foot-2 and 210 pounds, started all 13 games for the Boilermakers last season and finished second on the team with 52 tackles. A four-star prospect in the Class of 2019, Grant at the time also had scholarship offers from Michigan, Notre Dame, Cincinnati, Iowa, Iowa State and Pittsburgh, among other schools.

He did not appear in the NCAA's transfer portal until early last week and, as a redshirt junior in the fall, will have three seasons of eligibility remaining. He was a classmate of Kansas linebacker Rich Miller at Martin Luther King High.

Williams, who is 6-foot-2 and 203 pounds, only played in one game last season as a true freshman for the Crimson Tide — the national championship game loss to Georgia. Also a four-star prospect out of high school, Williams, from Marrero, Louisiana, chose Alabama over LSU, Auburn, Florida, Florida State, Oklahoma, Texas A&M and Tennessee, among others.

His name appeared in the transfer portal two weeks ago, and since then, he has received scholarship offers from Nebraska, Indiana, Tulane, Temple and Buffalo. He is planning to make an official visit to Nebraska later this week.

Kenny Logan, who led the Big 12 with 113 tackles last season, will be a senior in the fall. Edwin White-Schultz, O.J. Burroughs and Jayson Gilliom, all of whom will be sophomores next season, competed to start alongside him during spring practice.

Competing against some big dogs. A good sign that we’re even getting visits, though still a long ways from getting them on campus/field. This would seem to be more than momentum from the end of last year but ultimately needs to result in Ws and games in December/January.

These would be huge. It could turn this program in the right direction with these guys.