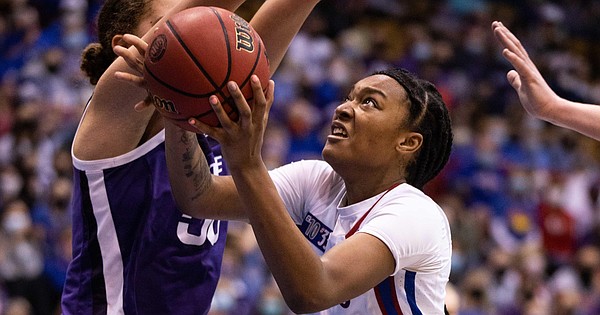 Kansas center Taiyanna Jackson tries to shoot against Kansas State's Ayoka Lee during a game at Allen Fieldhouse on Saturday. by Zac Boyer

The Kansas women's basketball team is back to receiving votes in the Associated Press poll after it pushed its winning streak to five games with a 63-51 home victory over Kansas State on Saturday at Allen Fieldhouse.

Kansas has not been ranked since Jan. 14, 2013, when it dropped to No. 23 in the poll after matching a season high at No. 17 the week earlier. That was the last season when the Jayhawks made the NCAA tournament; they were 20-14 that season and reached the Sweet 16 but lost 93-63 to No. 2 Notre Dame in Norfolk, Virginia.

What's more important to the Jayhawks than any poll, though, is the NCAA's NET Rating, which is used as a guideline for NCAA Tournament seeding. The Jayhawks were No. 34 in that metric on Monday morning, down from No. 32 a day earlier. There are 36 at-large bids to the 68-team tournament, meaning they are on the cusp of selection.

Coach Brandon Schneider has said that he believes KU will be in good shape if it's able to win nine Big 12 games and should be guaranteed entry if it hits 10.

They can improve their standing with wins Tuesday against West Virginia and Saturday at Texas Tech, teams they have already defeated this season. The road from there gets rocky; they'll finish the regular season with games against No. 6 Iowa State, No. 7 Baylor, No. 14 Texas and No. 15 Oklahoma.

Nice to see those votes, for sure. KU's vote tally is the second highest outside of the top 25 ranked teams, implying a "top 27 ranking." But, it's not much for them to really hang their hats on, as K-State received 44 votes in last week's poll, and this week they're nowhere to be found.

Stepping back for a moment to take a bit of a bigger picture view, it's clear that the team has already surpassed most honest people's expectations, i.e., outside of maybe the coaches and players themselves. Yet, after doing a little investigating over the past few days, I believe I can say that this is actually the result of bad luck. That is to say that they're doing this without one of their best players.

Had it not been for a torn ACL in September, 2020, Erica Haynes-Overton would be playing now. She transferred from East Tennessee State, had to sit out a year, but suffered the injury before becoming eligible. Am guessing (hoping) she'll join the team in the fall. She was Southern Conference defensive player of the year in both her freshman and sophomore seasons, and as a junior before transferring to KU scored 41 points and had 7 steals in a 72-68 loss to the University of Tennessee.

Plus, the two commits who'll join as freshmen both look borderline sensational. I'm already loving what I'm seeing, but I fully expect to have my mind blown next year, as in Top 10 potential.

It looks like my research was badly flawed regarding Erica Haynes-Overton's status. Apparently, she's been on the floor four times this season for a grand total of about 10 minutes, going a combined 5-7 from the floor. The appearances had to be brief, because I never miss a radio broadcast, and I have zero recollection of hearing her name mentioned. If anyone knows the story, please enlighten.