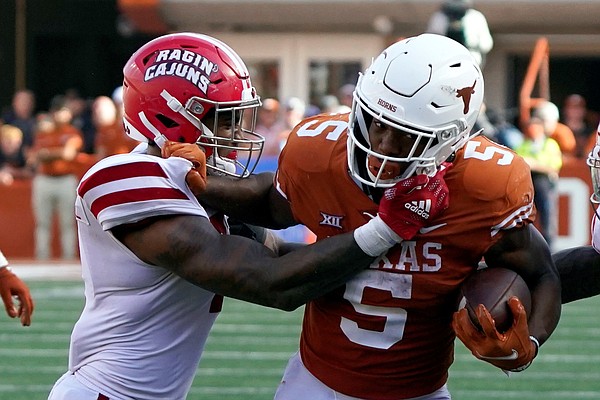 Texas' Bijan Robinson is hit by Louisiana's Lorenzo McCaskill during the second half of game on Sept. 4, 2021, in Austin, Texas. by Chuck Burton/Associated Press

Lorenzo McCaskill, a sixth-year senior linebacker who spent the last four seasons at Louisiana, was not in attendance for Kansas' first training camp practice on Tuesday.

Head coach Lance Leipold cannot comment on McCaskill's status because of NCAA regulations regarding players who have not been enrolled in classes, but McCaskill has been admitted to the university and is expected to be able to join the Jayhawks in the coming days.

A second-team All-Sun Belt selection last season, McCaskill, a Detroit native, chose to transfer to Kansas in late June. He entered the transfer portal in January, after coach Billy Napier was hired at Florida, and initially received interest from schools such as USC and Tennessee before opting to wait to find somewhere he could play a significant role.

McCaskill started 12 games last year at Louisiana, which reached a bowl game in each of his four seasons and was the Sun Belt champion in 2020 and 2021.

Meanwhile, left guard Nicholas Martinez, wide receiver Jordan Medley and running back Malik Johnson are no longer on the team but remain students at the university, Leipold said. Only Johnson played for the Jayhawks last season; he appeared in the finale against West Virginia and had one carry for 1 yard.

As for injuries, Leipold said sophomore safety Jayson Gilliom is the only player who will not be able to participate in the early days of training camp.

Gilliom was injured during spring practice, though the nature of the injury is unknown. He made 18 tackles last season while playing in all 12 games and starting three.

Jayson would be a good candidate to get his redshirt this year.

Jordan and Malik probably weren’t going to get much PT, but Martinez seemed like part of the OL for the future. We need to develop the OL depth. We’ll eventually run out of Buffalo players to poach.