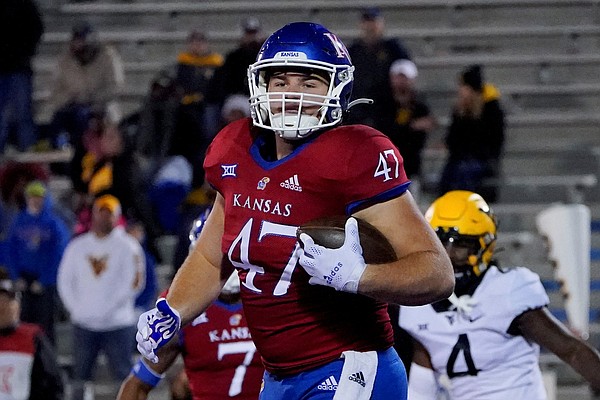 Kansas fullback Jared Casey catches the ball for a touchdown during a college football game against West Virginia on Nov. 27, 2021, in Lawrence, Kan. by Ed Zurga/Associated Press

A Wichita-based company that has handled name, image and likeness (NIL) opportunities for Kansas' men's and women's basketball teams has reached an agreement to do the same for its football team.

The company, 6th Man Strategies, will manage branding, marketing and endorsements for football players through a subsidiary, 12th Man Strategies. The company's priority will be to launch a football version of The 100 Club, a group of 100 supporters that will donate $1,000 per month to fund NIL opportunities.

Supporters who join The 100 Club are promised exclusive pre- and postgame access, an annual event with the team and discounts at local businesses.

The company will also work with alumni, former players and local businesses to provide NIL opportunities to football players.

According to a press release, 6th Man Strategies has helped generate $200,000 in sales of individually licensed men's and women's basketball merchandise through local retailer Rally House since the program was launched in October.

Its most notable football endorsement to date has been with tight end Jared Casey, the walk-on from Plainville who scored the winning two-point conversion in overtime at Texas in November and filmed a commercial for an Applebee's franchisee, Thrive Restaurant Group.

Kansas football is lagging Kansas basketball (which is understandable) in NIL.

Unfortunately, NIL is already and will continue to be a big deal going forward.