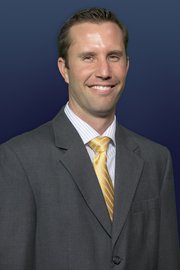 I'm one of the lucky ones. Over the past 10 years, I've witnessed some of the greatest sports moments in Lawrence history. Three Final Fours, one national title, four bowl games, a BCS win and several high school state titles. Don't be surprised if those numbers improve this year.

Personally, I grew up in the Lone Star State, attended KU and spent one year in Moberly, Missouri before returning to Lawrence.

In my sparetime, you can find me on the golf course. Unfortunately, I'm still not very good.

A much-needed week off arrives for the Kansas football team on Saturday. Mark Mangino's squad will wrap up the regular season a week from Saturday against Missouri.

Three days and counting until the Jayhawks' first true test of the 2008-2009 season. On Monday, the team will take on Washington.

Before the Kansas men's season even started, junior guard Sherron Collins was the default leader.

KU football prepares to take on Texas at home

The Longhorns visit Lawrence for the first time since 2004.

On Sunday, the Kansas women's basketball team plays its second and final exhibition game of the 2008-2009 season against Washburn.

The Kansas football team is trying to end a 40-year drought tomorrow against Nebraska. KU hasn't defeated NU in Lincoln since 1968.

KU to face KSU at home

Tomorrow, Memorial Stadium will be packed for the 106th installment of the Sunflower Showdown.

KU football gears up for Colorado

The Kansas football team is less than 48 hours away from playing its first conference home game of the year. On Saturday, the Jayhawks will welcome Colorado to Memorial Stadium.

Kansas running back steps up

For almost five games, KU running back Jake Sharp was practically invisible. In a matter of 30 minutes, that all changed for the Jayhawks junior.