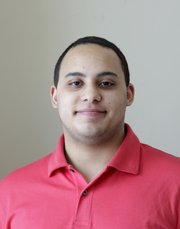 Udoka Azubuike paused for a couple of seconds, smiling with his eyes trained toward the locker room floor but his mind racing to a moment he’s dreamed about for years. By Bobby Nightengale

As special it is to play in his first Final Four this week, it’s just as meaningful to Kansas freshman forward Silvio De Sousa that his parents will be in attendance for the first time in his collegiate career. By Bobby Nightengale

With an opportunity to stay close to home, Lawrence High junior Chisom Ajekwu said it was an easy decision when she decided to verbally commit to play in the Kansas women’s basketball program. By Bobby Nightengale

The celebration started at midcourt with about 10 seconds left on the clock and Malik Newman standing at the free-throw line. Lagerald Vick, with a smile whipped across his face, hugged Devonte’ Graham on the logo and started to soak in all of his emotions. By Bobby Nightengale

Attempting to reach the Final Four for the first time since 2012, the Kansas basketball team will have to confront one of its biggest weaknesses Sunday against one of the top players in the country. By Bobby Nightengale

Kansas softball ready to show off speed in new season

Returning the heart of the batting order from last season, the Kansas softball team will look to frustrate opposing pitching staffs in a different way than past years. By Bobby Nightengale

After a whirlwind two weeks, Free State senior offensive tackle Jalan Robinson decided to press pause on his recruitment Wednesday and opted not to sign with any school on National Signing Day. By Bobby Nightengale