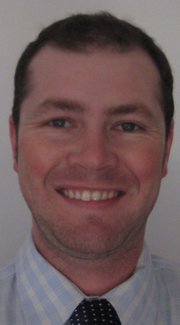 Alex Parker is digital editor for LJWorld.com and the Journal-World.

A native of Kansas City, Mo., he began his career in journalism at the Journal-World, as a general assignment reporter, and then covering education.

He then covered public health for the Chi-Town Daily News, an online nonprofit news organization in Chicago; later, he reported on Chicago politics and government for the Chicago Current, a political journal. Most recently, he was the online content producer for the Chicago Reader, an alt-weekly newspaper.

Alex covered the 2008 presidential election in Kansas for MTV News, and has written for the Chicago Tribune, RedEye, the University Daily Kansan and other publications. He began his career as a public relations professional.

A product upgrade by the Journal-World's Internet provider has caused difficulties accessing LJWorld.com and other stories.

Lawrence: City of Champions? Several hundred Kansas University fans made the case to name Lawrence ESPN's "TitleTown USA," as the sports network filmed a segment on Friday at Allen Fieldhouse. Earlier this week, ESPN named Lawrence one of 20 cities vying to be named the country's top championship city.

TV segment to be taped at Allen Fieldhouse on Friday

Can Lawrence compete with the likes of Boston, Los Angeles and Detroit? What about Ann Arbor, Mich., Williamsport, Pa., and Valdosta, Ga.? ESPN thinks it can, and to prove it, the sports network today named Lawrence a finalist in its "TitleTown USA" competition, which seeks to name the country's top championship city.

It's all over. The frenzied celebrations of the last few weeks culminated Sunday night at Allen Fieldhouse, where more than 10,000 fans gathered to pay tribute to the Kansas University men's basketball team.

It was like game day all over again. An estimated 6,000 fans waited for several hours to welcome the Kansas University men's basketball team to Allen Field House, following their Elite Eight victory over Davidson.

Call it Mass. chaos. Massachusetts Street turned into a tangle of triumph after Kansas University's Elite Eight victory over Davidson, sending the Jayhawks to the Final Four for the first time since 2003.

Fieldhouse to open for fans to welcome Jayhawks

Kansas University associate athletic director Jim Marchiony confirmed that Allen Fieldhouse will open for fans to welcome the victorious Jayhawks when they return from Detroit. Assistant athletics director of operations and events Bill Dickerson said the field house will open between 9:30 p.m. and 10 p.m.