Right tackle Deondre Doiron became the latest Buffalo football player to decide to transfer to Kansas when he did so Friday.

Topeka native Ky Thomas, who transferred from Minnesota to Kansas in January to be closer to home, will make his first appearance before the public in a Jayhawks uniform on Saturday during the football team's annual spring game. 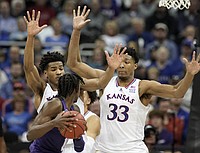 TCU guard Damion Baugh (10) can't find an outlet as he is pressured by Kansas ...

during the second half of the Big 12 Tournament championship game on Saturday, March 12, ...

Kansas head coach Bill Self directs his team during the first half on Thursday, March ...

Kansas vs. TCU at Big 12 Tournament

Kansas vs. WVU at Big 12 tournament

View a gallery of images from the championship game of the Big 12 Tournament between ...