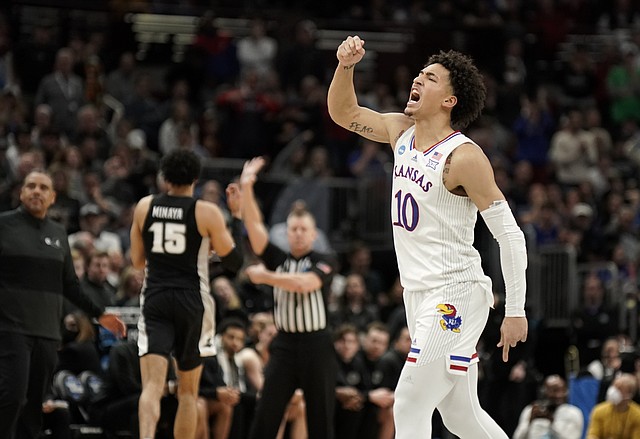 Kansas forward Jalen Wilson (10) pumps his fist as the Jayhawks take control late in the second half against Providence on Friday, March 25, 2022 at United Center in Chicago. The Jayhawks defeated the Friars, 66-61.

For the second year in a row, this time as a defending national champion, Kansas forward Jalen Wilson has withdrawn his name from the NBA draft pool in favor of a return to KU. Wilson's decision came a couple of hours before Texas Tech transfer Kevin McCullar Jr. announced his plans to join the Jayhawks. The two moves on Wednesday night filled out KU's roster for the 2022-23 season. By Matt Tait

Kansas forward Jalen Wilson has been invited to attend the NBA’s pre-draft combine after a strong showing in the two-day G League Elite Camp this week in Chicago. By Matt Tait

Friday night, with its season on the line and the three other No. 1 seeds out of the NCAA Tournament already, top-seeded Kansas played a game that featured as many ugly moments as pretty and as many heart-stopping plays as easy ones. The result was a 66-61 win over fourth-seeded Providence at United Center that sent the Jayhawks (31-6) to the Elite Eight for the eighth time under head coach Bill Self and the first time since 2018. By Matt Tait