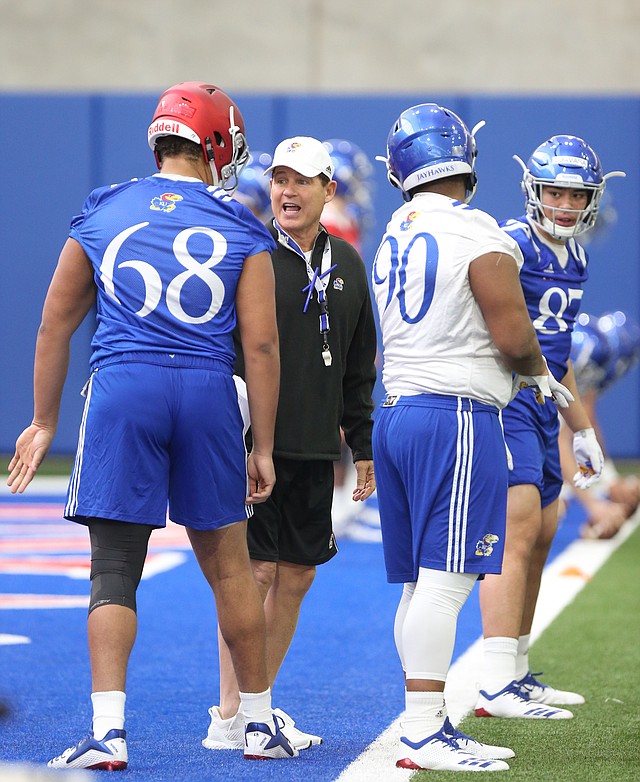 For anyone wondering why the Kansas football team’s 2020 signing class had so many receivers, allow Les Miles to explain. Actually, while recapping this past week the Jayhawks’ list of incoming freshmen, Miles was happy to share his opinion that KU filled specific needs at a few other positions, too. By Benton Smith

Any Kansas football fans who have looked forward to getting some behind the scenes glimpses of Les Miles and the Jayhawks through a new ESPN+ series will have to wait another week — and then binge watch the first four episodes before the season kicks off. By Benton Smith

Retirement didn’t suit Les Miles. After a little more than two years of being away from college football, the former LSU head coach gladly reentered the work force at the University of Kansas this past November. By Benton Smith

Already past the halfway mark of his first spring in charge of the Kansas football program, head coach Les Miles admitted following Tuesday’s practice that there has been some dissatisfaction with the Jayhawks’ progress — and that lack of fulfillment isn’t only being expressed by Miles. By Benton Smith

As their college careers came to an end this past November, the seniors on the 2018 Kansas football team closed a chapter of their lives just as a new one was opening for the program. Out went standouts Daniel Wise, Joe Dineen and Steven Sims Jr., and in came renowned former LSU coach Les Miles, their paths barely crossing. By Benton Smith

After getting the previous week off for the university’s spring break, the Kansas football team got back to its spring practice schedule Tuesday afternoon and, unlike the first two sessions from earlier this month, the Jayhawks got to wear some shells and do some hitting. By Benton Smith

It was just some special teams review. A chance for offensive linemen to go over a formation and walk through their assignments. A minor yet necessary part of the first day of spring football practice. And there was Les Miles, former head coach at powerhouse LSU, right in the thick of it, jumping in to go over footwork and technique in one of the early periods of his Kansas football team’s introductory practice under his guidance. By Benton Smith