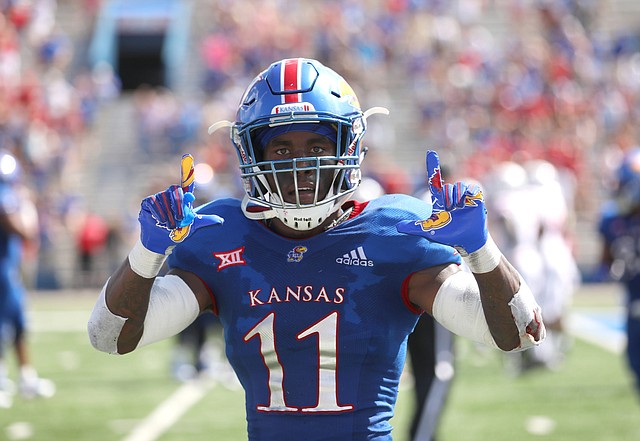 Kansas safety Mike Lee (11) celebrates before the cameras after returning an interception for a touchdown during the second quarter on Saturday, Sept. 15, 2018 at Memorial Stadium.

Mike Lee is not sure what to expect. Shane Jackson

“Guys are playing more confident and more relaxed and listening to (defensive coordinator Clint Bowen), and obviously applying it,” Daniel Wise said. “And you see what happens when you do that.” The most eye-popping upshot, through three nonconference games at least, has been the defense’s ability to turn opponent mistakes into punishing takeaways. By Benton Smith

Mike Lee, third-year starter for the Kansas football team, and basketball player Marcus Garrett both are skilled at intercepting passes and that’s not all they have in common. They both also happen to be big fans of Mike Lee.

KU’s takeaway-happy defense left the field with possession of the ball three times in the first quarter alone. Then, during the timeout leading up to the second quarter, former KU star quarterback Todd Reesing capped his Ring of Honor ceremony by leaping and delivering one of his signature fiery fist pumps. The stage, Mike Lee felt, was set for his big moment. And he pounced with an interception that he doggedly returned 31 yards for a touchdown, further inciting the Jayhawks to drub visiting Rutgers, 55-14. By Benton Smith