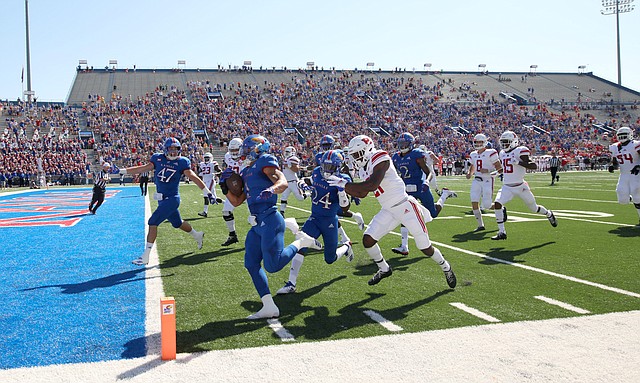 Kansas safety Bryce Torneden (1) runs in a touchdown after intercepting a Rutgers pass during the first quarter on Saturday, Sept. 15, 2018 at Memorial Stadium.

'How many of those came from Rutgers?': Interceptions harder for Jayhawks to find in Big 12 play

Currently tied for fourth in the nation in passes intercepted, the Kansas football defense has benefited from eight different players contributing an interception. When asked about that fact at his weekly press conference, WVU head coach Dana Holgorsen interjected with a question of his own. “How many of those came from Rutgers?” By Benton Smith

“Guys are playing more confident and more relaxed and listening to (defensive coordinator Clint Bowen), and obviously applying it,” Daniel Wise said. “And you see what happens when you do that.” The most eye-popping upshot, through three nonconference games at least, has been the defense’s ability to turn opponent mistakes into punishing takeaways. By Benton Smith

For the first time since 2011, members of the Kansas football team can say they’ve won back-to-back games. The Jayhawks followed their road losing streak-killing victory at Central Michigan by closing nonconference play with a 55-14 home drubbing of Rutgers on Saturday. By Benton Smith