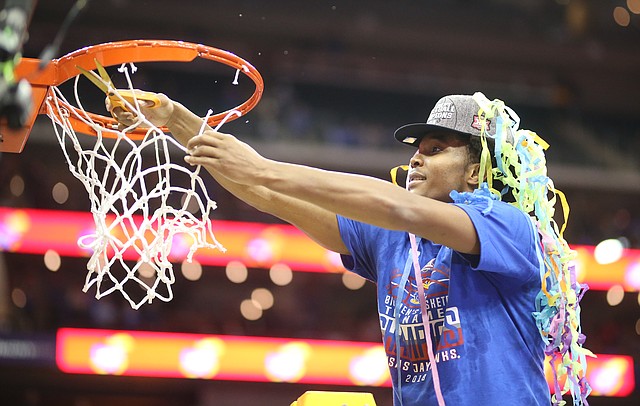 Kansas guard Devonte' Graham (4) cuts down his share of the net following the JayhawksÕ 81-70 win over the Mountaineers in the championship game of the Big 12 Tournament, Saturday, March 10, 2018 at Sprint Center in Kansas City, Mo.

The story behind the rap about KU basketball's point guard

RedHead, the man behind two raps about Frank Mason, recently came out with another for Devonte' Graham. This is the story behind his music-making. By Scott Chasen

It’s called a shooting sleeve, looks like a white stocking, and stretches from just above the wrist to just below the armpit. Devonte’ Graham wears his on his non-shooting arm — at least he did until he decided to take it off in mid-dribble. All alone and just past midcourt, the Kansas basketball team’s most impressive multitasker revealed a new move Saturday during the Big 12 title game in Sprint Center. By Tom Keegan